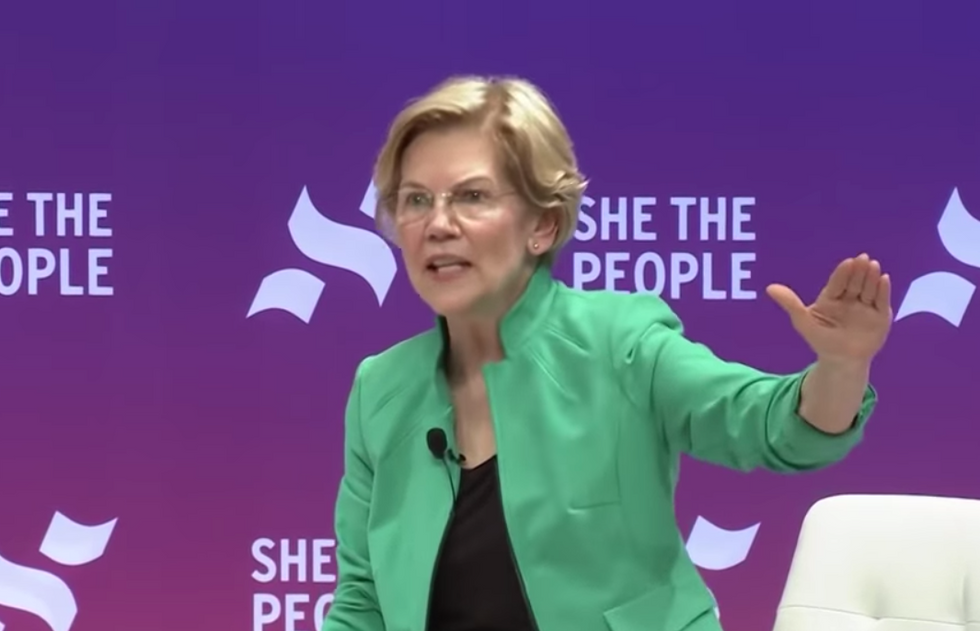 In February, Sen. Elizabeth Warren wrote that she would not hold high-dollar fundraisers for her primary campaign. She also promised to accept "no Washington lobbyist money, no PAC money, no auditioning billionaires to run a super PAC for me, and no dark-money groups devoted to supporting this campaign."

In the general election, however, the situation would be different. She wrote that "we’ll be up against a Republican machine that will be hell-bent on keeping the White House. They will have PACs and Super PACs and too many special interest groups to count, and we will do what is necessary to match them financially."

It was a straightforward campaign promise, clear enough for even the most obtuse pundit to understand. And yet, since then, columns and articles claiming that she has violated "the spirit" of her pledge have become a staple of the early primary season.

In July, Buzzfeed reported that "Warren relied on a multimillion-dollar Democratic donor to cover the cost of an expensive voter database — a move that risks putting her campaign at odds with the spirit, if not the letter, of the pledge she made to abstain from 'big money' fundraising." The piece noted that "the candidate herself did not make any calls" to the deep-pocketed donors, "nor did the campaign solicit the money at a fundraising event."

More importantly, this raised money for the Democratic Party, not for her campaign. In her February Medium post, Warren had written that "do[ing] what is necessary" to match the GOP in the general election "means investing — starting now — in each and every one of our state parties, and in our national party too."

The Washington Free Beacon also got in on the act, reporting that some wealthy people, including business execs, have made individual contributions of up to $2,800 to Warren's campaign. She didn't dial for their dollars or hold swanky fundraisers for them, but they cut her some checks which ostensibly violated the spirit of her "People's Pledge" once again.

Redmassgroup, a conservative website, also dinged Warren for holding a small-dollar fundraiser ($50 to get in), apparently coordinated with the  Progressive Change Campaign Committee (PCCC), at the offices of the Boston Teachers Union. "While not a technical violation, isn’t this a violation of the spirit of the 'People’s Pledge?'" wondered the author of the post.

The fact that the PCCC is backing Warren was also the basis of the Associated Press reporting that Warren's (and other Dems') promises to eschew PACs and dark money groups "come[] with an asterisk." But towards the end of the article, the AP acknowledged that PCCC's PAC and two related groups which don't disclose their donors aren't promoting Warren's campaign. Adam Green, PCCC's co-founder, told the AP that "all spending to help Warren will be done through an arm that doesn’t accept unlimited money," and that "it’s unfair to compare his organization, which supports numerous candidates for other offices, to that of a super PAC devoted to supporting the political ambitions of one person."

The latest in this genre is a piece by Shane Goldmacher in today's New York Times. While Goldmacher doesn't explicitly accuse Warren of "violating the spirit" of her pledge by transferring money she had previously raised from big donors into her primary campaign account, it's strongly implied. The headline, "How Elizabeth Warren Raised Big Money Before She Denounced Big Money," suggests that she's a hypocrite.

Let's briefly review what Elizabeth Warren did not promise vis-a-vis fundraising.  She didn't vow to return donations from rich people, or corporate execs, nor did she promise that she wouldn't transfer money she'd raised from big donors in the past into her primary campaign. She did not say that she would never raise big bucks for state Democratic parties and the DNC and she didn't vow to bar groups like PCCC, which help progressive candidates across the board, from supporting her campaign. She said that she would not accept corporate or PAC cash during the primaries, nor hold high-dollar fundraisers or spend hours calling rich people and begging them for money. She has so far kept that promise, regardless of what pundits may define as its "spirit."

There are a few things going on here. There's an ideological component to such reporting from outlets like The Free Beacon. Neutral reporters tend to have a status quo bias, and treat things like eschewing high-dollar fundraisers as radical. And mainstream Dems who resent being put on the spot for their own fundraising activities are happy to offer quotes for pieces like Goldmacher's.

And then there are our two-year election cycles. We're still almost five months away from the first primary votes being cast, but it seems like the campaign has been underway for an eternity. If you're a reporter who has to file a few pieces a week about a campaign that has been relatively stable so far, it can be tough to come up with story ideas. Cheap gotcha journalism is a natural byproduct of having to say a lot about a race even when not that much is going on.