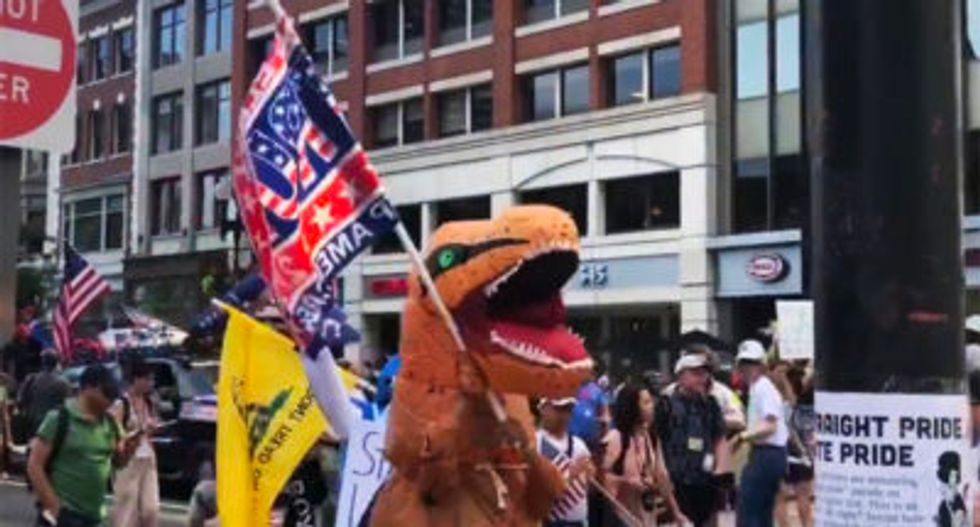 The Straight Pride Parade held in Boston on Saturday was greeted by counter-protesters -- and a large degree of ridicule.

"In dueling demonstrations about a mile apart, a Straight Pride Parade with a few hundred marchers holding small American flags stepped off at noon from Copley Square as a vocal counterprotest continued to grow at City Hall Plaza, the destination of the controversial march," the Boston Globe reported Saturday. "Hundreds of police, many with gas masks and helmets, stood watch or walked beside the parade toward Government Center, where protest organizers pumped up the crowd with chants such as 'No justice, no peace, no racist police' and 'We’re here, we’re queer, we’re fabulous.'”

"The parade was organized by the group Super Happy Fun America, whose leaders have denied allegations of bigotry," the newspaper noted. "Protesters, however, called the parade an affront to the LBGTQ community that is intended to stoke discrimination."

"Parade organizer Mark Sahady is part of Resist Marxism, a group founded by an alt-right leader that has a history of violence. That group helped organize a 'free speech' rally in Boston in 2017 that critics said attracted white nationalists," the Globe noted.

Here are some of the images from Boston:

Can’t hear the Straight Pride speeches over the crowd outside chanting “bottoms and tops, we all hate cops” https://t.co/KpHAqow45D
— Ryan Broderick (@Ryan Broderick)1567275621.0

I love ‘Straight Pride’ events. I love the idea that the human mind is sophisticated enough to allow men who can’t… https://t.co/KFK6HFcmLP
— James O'Brien (@James O'Brien)1567279092.0

The Straight Pride Parade— a grift event with connections to violent hate groups— have fewer than 20 people there.… https://t.co/coSfoqwMVo
— AntiFash Gorgon (@AntiFash Gorgon)1567261788.0

Was worried that Milo’s straight pride parade would cause traffic problems here my last day in Boston but the traff… https://t.co/HQhLLNRlQ0
— CoronaInItalyHat (@CoronaInItalyHat)1567269696.0

One more dance performance before the group ends the event with chants and lots of pride https://t.co/gBgfznSMcM
— Aimee Ortiz (@Aimee Ortiz)1567265516.0

One of the Boston Straight Pride Parade floats is a car with a piece of paper reading, Blue Lives Matter taped to i… https://t.co/xt7UIPC6Bl
— Sam Bishop (@Sam Bishop)1567263600.0

David here at the Boston Straight Pride Parade has been going on for the last 10 minutes ranting about how the Jews… https://t.co/3IURpNDuXH
— Sam Bishop (@Sam Bishop)1567264627.0

Here's a guy with green makeup in a kekistan shirt holding a pillow with some weird anime version of sargon of akka… https://t.co/Rwp99McoBN
— Wild Geerters (@Wild Geerters)1567272926.0

A lot of businesses along the #StraightPride route have rainbow flags out, or in the case of this building, signs s… https://t.co/aDJUds3orD
— Zack Ford (@Zack Ford)1567266480.0

A Straight Pride Parade is a participation trophy for dudebros who are angry nobody ever swipes right on them.
— Adam Best (@Adam Best)1567278502.0