Betsy DeVos is at it again: The education secretary's new rule is a win-win for everyone but defrauded students 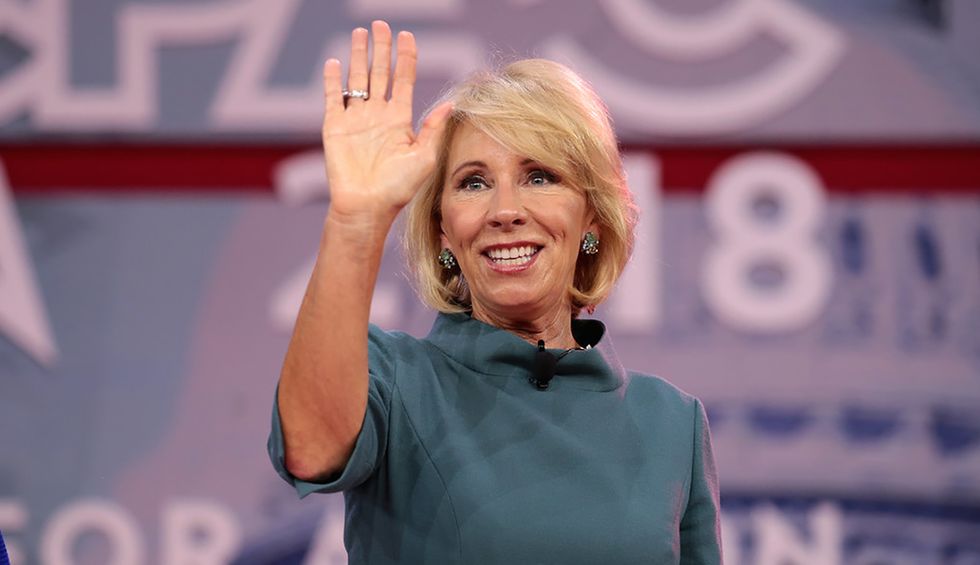 They're back — the folks in the Education Department.

Remember Betsy DeVos? Trump made her Secretary of Education. She had no experience in education but was a big fan and supporter of charter schools in Michigan. Those schools were, by most measures, less successful than their public school counterparts and scored much lower on various comparative measures than schools in other states. Nonetheless, she was very wealthy and that, as we have learned over the years, is all that is required for someone to be invited to play in the Trump playground.

Remember Diane Auer Jones? She is a senior adviser to the Department of Education on post-secondary education. She was an early hire by Betsy. Before starting work there she spent five years as a senior vice-president at Career Education Corporation.

Career Education Corporation was a company in the for-profit education world that in early 2019 agreed to forgive $494 million in student debt as a result of an investigation into its practices by 49 State Attorneys General. The Attorneys General concluded that Ms. Jones' employer had engaged in deceptive tactics in order to recruit students. Among other things, the students were charged for vocational programs that did not have the proper accreditation for students to obtain licenses to work in their fields of study. The forgiven loans were for money owed to the institution. The practices in question had all occurred during the time Ms. Jones was a senior vice president at the company.

Now, Mesdames Jones and DeVos are at it again. On August 30, 2019 , the Education Department announced that it was making it more difficult for students who had been defrauded by for-profit institutions to receive relief from their debts. They were reforming rules known as the "borrower defense to repayment" rules. Those rules had enabled recipients of educational loans to avoid repayment under certain circumstances.

The new rules apply to loans made after July 2020. The loans significantly tighten up the ability of a student to get a loan discharged when, for example, the for-profit institution closes its doors before the student has graduated. Under the Obama era rule there was something called the "automatic closed school discharge." That rule provided that, if a for-profit school, such as Ms. Auer's, closed its doors before a student had gotten a degree, the student could apply to have the loan discharged. Under the Obama era rules, there was no time limit on when the student had to apply for debt relief.

Under the DeVos rule the student must apply for relief within three years after the school closing. As Ms. Auer explained: "We believe that within three years, the borrower will know whether or not there has been misrepresentation." In masking that assertion she is probably drawing on her own experience while working at Career Education Corporation.

Under the Obama rules, the student debt was automatically discharged if the student did not enroll elsewhere within three years. Approximately 20,000 borrowers availed themselves of that provision resulting in the discharge of close to $222 million in student loans. That will no longer be permitted.

The burden the new rules place on students seeking relief from for-profit schools that scammed them, is offset by the benefit received by the taxpayer. As Ms. Devos said when announcing the new rules, fraud in higher education "will not be tolerated." But, she went on to explain, the rules include "carefully crafted reforms that hold colleges and universities accountable and treat students and taxpayers fairly." The "fairness" means that the amount of student debt being forgiven will be reduced by more than $500 million annually. Over the next ten years it is estimated that the taxpayers will save more than $11 billion. The savings to the taxpayers will, of course, rest on the backs of the defrauded students.

Commenting on the new rules, Senator Dick Durbin of Illinois said: "This rule is another Trump-DeVos giveaway to their for-profit college cronies at the expense of defrauded student borrowers." Rep. Bobby Scott (D.Va.) said that "the Trump administration is sending an alarming message: Schools can cheat [their] student borrowers and still reap the rewards of federal student aid."