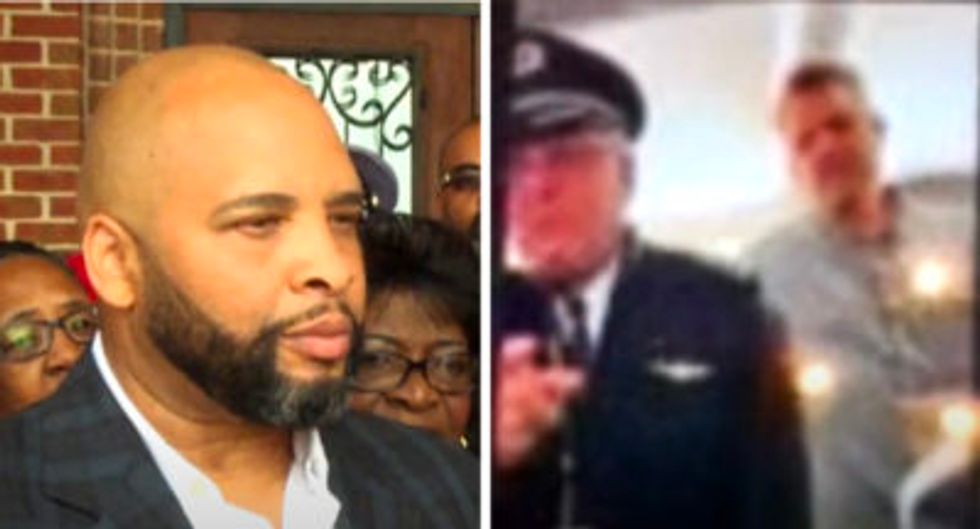 According to a report from KWTX, a black man traveling first class on an American Airlines flight was booted from the plane after he complained that he was allergic to a fellow passenger's support dog.

The report states that Dana Holcomb was flying back to Texas from Las Vegas -- where he celebrated his birthday -- when the plane made a stop in Phoenix to pick up more passengers.

"I sat on the seat and there was a young lady sitting next to me who had a pet with her, a medium-sized dog in her lap,” Holcomb said in an interview. “As I sat there for a few minutes my eyes, my face everything began to fluster, so she looked over at me and she asked me if I was allergic to dogs.”

Admitting that he was, he said the woman attempted to find another seat but could not be accommodated which led to flight attendants and then a pilot to become involved, telling him to move to another seat in the back of the plane.

According to Holcomb, the flight attendant, "Began to get really irate because he was insisting that I go to that seat."

Holcomb's attorney, Reginald McKamie Sr, explained the lawsuit he filed on his client's behalf against the airline, stating, "At that point (workers) told him you’re going to go to the rear of the plane or get off the plane."

He then added, "Dana was taken off an airplane so a dog could fly first-class cabin."

Holcomb stated that woman did eventually find another passenger willing to switch seats with her, but that he was booted from the plane -- as well as the airport -- by American anyway and was accused of being "confrontational."

“They left with my medication, they didn’t even have the time to get my bags off the plane,” he told reporters.

According to Curtis Blessing, an American Airlines spokesman, Holcomb was removed “after causing a confrontation with crew members regarding an emotional support animal that was seated next to them prior to takeoff.”

“After informing flight attendants of a pet allergy, the passenger was offered an alternative seat in the first-class cabin further away from the emotional support animal but declined and became confrontational,” Blessing added. “They were then offered a seat in main cabin to provide additional separation and were offered a refund for the difference in their first-class fare but also declined and remained confrontational.”