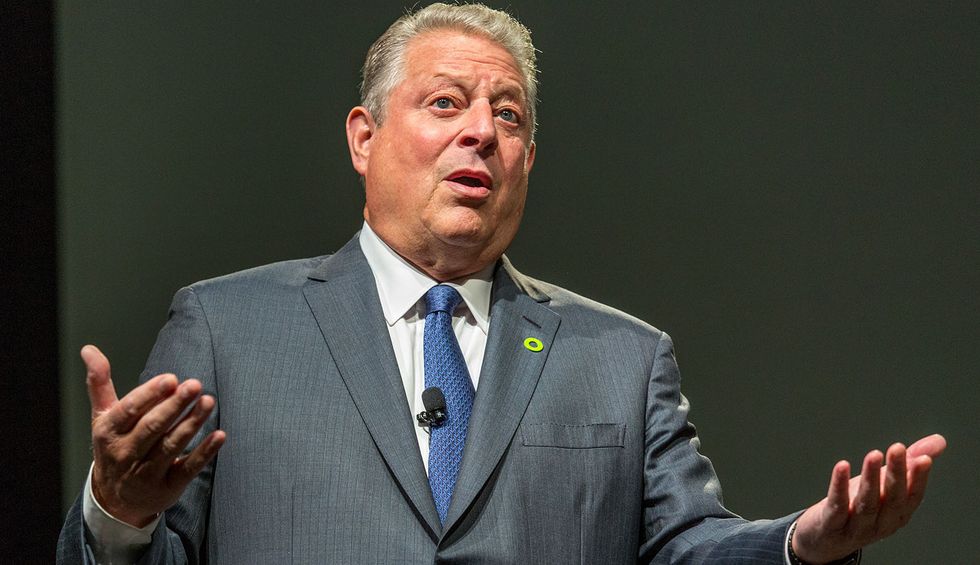 I remember when Gore stood before Congress and gaveled in the proceedings that certified his election loss. He was repeatedly forced overrule the objections from fellow Democrats incensed at the disenfranchisement of African-American voters in Broward County. He had won the popular vote by over 500,000–yet there he stood, stoically presiding over his own defeat. It must have been the longest 90 minutes of Gore’s life.

The Bush campaign had relentlessly tagged Gore as a pathological liar, most famously accusing him of claiming to have invented the internet. The label stuck. The ever-compliant media was happy to play along, filling the airwaves with parodies of Gore’s supposed fibbing.

Rarely discussed was the reality that Gore never even remotely claimed any such thing. This is the quote that the Bush campaign managed to transform into “I invented the internet:”

It was quite the trick telling whopping lies to convince voters that your opponent was a whopping liar, and yet the Republican Party pulled it off effortlessly. This was my first realization that the American media was irremediably broken.

All it took was 537 votes in Florida and one of the worst Supreme Court decisions in American history to vanquish Gore to the island of failed contenders. Imagine how different would America be were it not for those votes.

Remember that Bill Clinton’s 2000 budget actually posted a $236B surplus, which Al Gore proposed using to shore up Social Security. Our deficit is now running at over $1 TRILLION a year and Donald Trump is threatening on gutting Social Security if re-elected.

Those 537 votes enabled a tragically wasteful war in Iraq, one of the most boneheaded foreign policy blunders in American history. That war cost $2.4 trillion, resulted in the deaths of over 200,000 people–including 4,424 Americans–and destabilized the region.  And it was entirely a war of choice.

And what about the global financial crisis of 2007? Would it have occurred were it not for Bush’s penchant for bringing industry hacks into government to take a machete to financial regulations?

It’s even possible that nerdy ole’ Gore would have asked some hard questions when presented with hints that Bin Laden was planning on hijacking airplanes and use them as weapons against the United States.

How many votes in Florida was the “I invented the internet” lie worth? Almost certainly more than 537.

The galling irony is that the internet does indeed owes a tremendous debt to Al Gore’s legislative work. Gore had closely followed developments in information technology since the 1970s. His High Performance Computing Act of 1991 funded research that, among other things, led to the development of MOSAIC, the first world-wide web browser–as well as bringing together researchers with the purpose of accelerating the development of the “Information Superhighway,” which was Gore’s characteristically clunky name for a publicly accessible internet.

Even as late-night comedians mocked Gore for his supposed mendacity, the actual progenitors of the internet gave him serious props for his advocacy.  Vint Cerf and Bob Kahn, computer scientists who developed the communications protocols that made networked digital communications possible, praised Gore for his contributions:

As far back as the 1970s Congressman Gore promoted the idea of high-speed telecommunications as an engine for both economic growth and the improvement of our educational system. He was the first elected official to grasp the potential of computer communications to have a broader impact than just improving the conduct of science and scholarship … the Internet, as we know it today, was not deployed until 1993. When the Internet was still in the early stages of its deployment, Congressman Gore provided intellectual leadership by helping create the vision of the potential benefits of high speed computing and communication.

After the election, Gore went on to grow a paunch and a scraggly beard, taking on the bedraggled typical of failed presidential candidates. He then reinvented himself as a ecological prophet warning of the calamities of global climate change.

His Inconvenient Truth brought abstruse scientific issues such as carbon dioxide concentrations and Antarctic ice core samples into the public conversation. Scientists were impressed at the accuracy of his scientific understanding. They shouldn’t have been; Gore had been following the link between CO2  and climate change since the late 1960s.

While Gore presented the harsh environmental facts to the world public, the Bush Administration reneged on a campaign promise to combat global climate change, walking away from the Kyoto Protocol. Instead, he gutted environmental regulations after Dick Cheney convened a secretive energy task force composed primarily of oil and gas executives.

In 2006, CO2 concentrations were 380ppm. They are now around 418ppm. The hottest seven years in recorded history have all occurred since the release of an Inconvenient Truth.

Al Gore, the poor bastard–poor eggheaded, wooden, sad sack Al Gore. Gore didn’t know how to play the saxophone. Americans didn’t want to have a beer with him, even though he was the candidate not in recovery. He was the petty fabulist who managed the tremendous feat of telling outlandish lies that actually made him seem more boring.

For such an inveterate liar, however, it’s amazing just how often Gore has been not just right but downright prescient.  Gore has seen farther than any other politician on the most transformational issues of our age: climate change and the digital revolution. He explored these issues decades before his fellow lawmakers would even given them a passing thought.

The problem with Gore wasn’t that he was a nerd with negative charisma points. The inconvenient truth is that Gore was always a serious grownup hoping to lead a nation trained to prefer childish fantasy. He preferred being truthful to being entertaining, and that was his downfall.

American society has come to prefer entertainment over truth. And that may very well be our downfall.