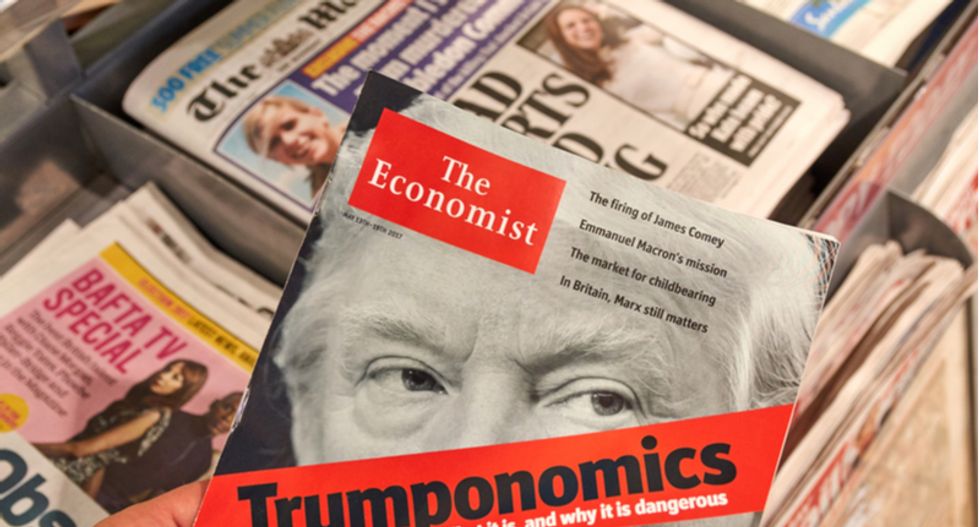 Maggie Haberman reports for The New York Times that "Donald Trump, confronting perhaps the most ominous economic signs of his time in office, has unleashed what is by now a familiar response: lashing out at what he believes is a conspiracy of forces arrayed against him."

He has insisted that his own handpicked Federal Reserve chair, Jerome H. Powell, is intentionally acting against him. He has said other countries, including allies, are working to hurt American economic interests. And he has accused the news media of trying to create a recession...

Mr. Trump has repeated the claims in private discussions with aides and allies, insisting that his critics are trying to take away what he sees as his calling card for re-election. Mr. Trump has been agitated in discussions of the economy, and by the news media’s reporting of warnings of a possible recession. He has said forces that do not want him to win have been overstating the damage his trade war has caused

It's a remarkable display of Trump's deep-seated narcissism. It's true that investors are jittery because of Trump's hamfisted tradewar, which is about him, but the alarms are also sounding because Germany's economy is slipping into recession, France is showing unexpected weakness, China's stumbling and the UK looks increasingly likely to end up crashing out of the EU without a negotiated agreement. The economy is cyclical, and the U.S. is currently in the longest sustained period of growth in its history. A downturn is inevitable, although its timing is impossible to predict. His incompetent management is certainly a part of the story, but it's not all about him and the 2020 election.

Of course, all incumbents worry about economic factors beyond their control affecting reelection prospects. But more than any other president, Trump cares about appearances in toto. Maintaining appearances is maintaining “unreality,” to use Jason Stanley’s term. If the economy contracts, bye-bye unreality. And bye-bye unreality could mean bye-bye President Donald Trump.

This is almost certainly correct. But Trump's approval ratings have been consistently dismal despite a strong economy, and there's no guarantee that this disconnect doesn't cut both ways. It's probably the case that positive perceptions about the economy has given Republicans outside Trump's cult permission to shrug off the corruption and incompetence and ridiculous rhetoric. But it could also be the case that negative partisanship and social and racial grievances are such strong motivators for Trump's supporters that his popularity among his base is uniquely detached from economic realities.

The problem for Trump is that he needs more than his core supporters to win re-election. And if his denial of economic reality persists, it will cost him dearly outside of that group. It's one thing to mismanage the economy into a recession, but it's far more damaging to a politician to appear out-of-touch with the country's economic pain.