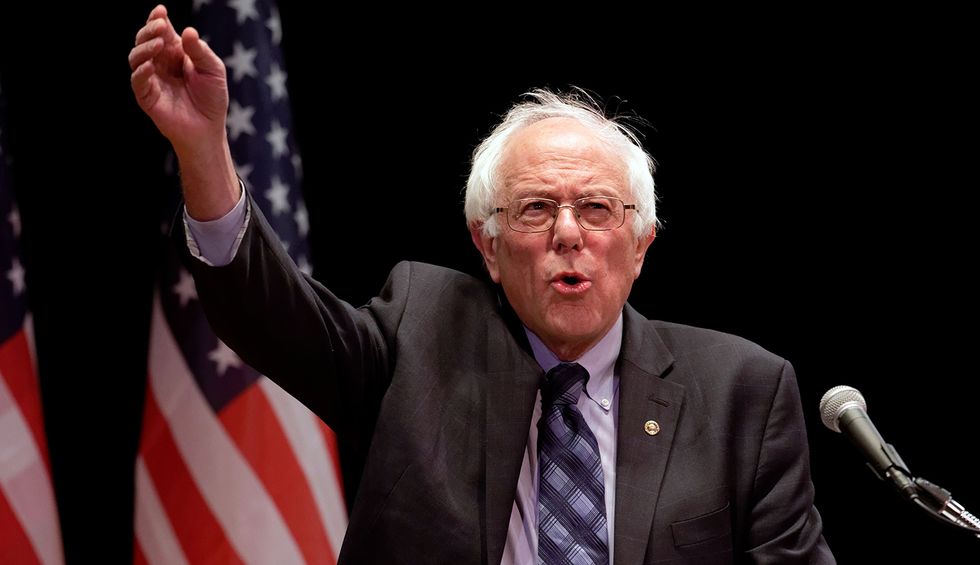 Many decades ago, the great media critic George Seldes observed: "The most sacred cow of the press is the press itself." That remains true today.

Bernie Sanders set off the latest round of outraged denial from elite media this week when he talked to a crowd in New Hampshire about the tax avoidance of Amazon (which did not pay any federal income tax last year). Sanders went on to say: "I wonder why the Washington Post—which is owned by Jeff Bezos, who owns Amazon—doesn't write particularly good articles about me. I don't know why. But I guess maybe there's a connection."

Sanders has fought explicitly and effectively to raise the wages of Amazon workers as well as millions of others. Yet the mass-media pretense is that the financial interests of the Post's owner have no effect on the newspaper's coverage of Sanders.

Corporate denial is the name of that media game. Usually, expressed denials aren't necessary. But there's nothing usual about Bernie Sanders, who's been willing to call out the biases and blind spots of corporate media since he entered politics.

For his latest transgression, Sanders earned purportedly authoritative pushback from the likes of the Post's top editor, its media columnist and others with high media visibility. "Contrary to the conspiracy theory the senator seems to favor," Post executive editor Martin Baron declared, "Jeff Bezos allows our newsroom to operate with full independence, as our reporters and editors can attest."

The Post's media columnist Margaret Sullivan quickly chimed in with a harmonizing tweet on Tuesday, defending her editor boss along with the owner of the paper: "I've never seen or heard a hint of @jeffbezos interfering in @washingtonpost coverage."

CNN's Chris Cillizza, citing his work at the newspaper for a decade, indignantly wrote: "For the last three of my years at the Post, Bezos owned the company. Not once in all of that time—and I wrote multiple pieces a day about politics and politicians (including Sanders and Trump) over that time—was there ever even a whiff of Bezos' influence in the newsroom."

As George Seldes commented long ago, "The most stupid boast in the history of present-day journalism is that of the writer who says, 'I have never been given orders; I am free to do as I like.'" Seldes noted that reporters routinely "know from contact with the great minds of the press lords or from the simple deduction that the bosses are in big business and the news must be slanted accordingly, or from the general intangible atmosphere which prevails everywhere, what they can do and what they must never do."

All Baron or Sullivan would need to do to disprove their own current claims would be to write a bunch of pieces denouncing the man who owns the Post—and then see what happens due to their breach of required self-censorship.

On television, a CNN anchor joined with a USA Today columnist to claim that Sanders's criticism of the Post's coverage was free of evidence. The fact that corporate-media employees are vehemently defending corporate media is illustrative of the dynamic. It makes you wonder where career self-interest ends and sincere delusion begins.

Baron, Sullivan, Cillizza and countless other employees of corporate media are well-paid while publicly maintaining their denial in the service of corporate power. So, with the virtues of the Washington Post on parade, Emperor Bezos must be decked out in the journalistic finery of his new clothes, even when the self-interest and implications of billionaire leverage over media are stark naked.

What Bernie Sanders is pointing out is not—and he never said it was—a "conspiracy." The problems are much deeper and more pernicious, having to do with the financial structures of media institutions that enable profit-driven magnates and enormous corporations to dominate the flow of news and commentary.

The Post's Baron is ill-positioned to defend his newspaper against charges of anti-Sanders bias. Such bias has been profuse, and it began well before a pivotal moment in the 2016 campaign on the eve of the high-stakes Michigan primary in early March. Then, as FAIR analyst Adam Johnson showed, "the Washington Post ran 16 negative stories on Bernie Sanders in 16 hours."

This year, the Post has strained to throw negative light on Sanders' campaign, whether focusing on Wall Street or Venezuela. Nor is the Post far afield from other powerful media outlets. For instance, the New York Times reportage has taken Sanders to task for alleged sins such as desiring to exercise control over his own campaign and failing to please Democratic critics who are actually corporate lobbyists but not identified as such.

Nor is the AT&T-owned CNN far afield from the baseline of cable news giants that supposedly provide a liberal alternative to the odious Fox News. Coverage from MSNBC—owned by Comcast, "the world's largest entertainment company"—has provoked one assessment after another after another documenting the network's anti-Bernie bias.

"The corporate-owned and corporate-advertiser-funded media of this country are the biggest barriers between Bernie Sanders and the Oval Office," I wrote five months ago. "Often functioning as propaganda outlets, the major news media serve as an amplification system for corporate power that has long shielded the Democratic Party from the combined 'threats' of social movements and progressive populist candidates." (I continue to actively support Sanders.)

Journalists who have staked their careers on remaining in the good graces of corporate employers are certainly inclined to say in public that billionaire owners and huge corporations don't constrain their journalistic work. And in their minds, they might be telling the truth. As George Orwell wrote, "Circus dogs jump when the trainer cracks his whip, but the really well-trained dog is the one that turns his somersault when there is no whip."