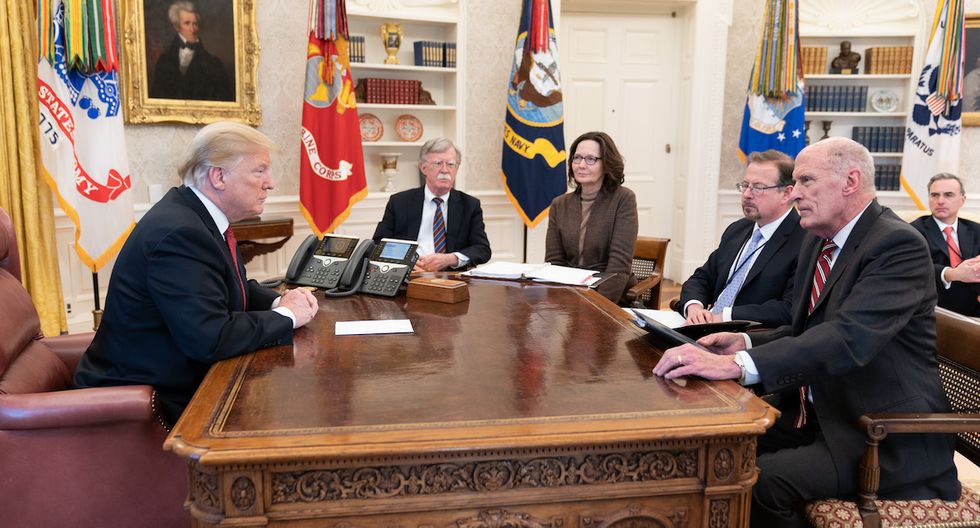 In response to the Russia investigation that ended up examining and prosecuting the conduct of many of President Donald Trump's top aides and advisers, right-wing media — with the White House in tow — has launched a years-long campaign to denounce the government's "spying" capabilities.

But this public relations effort bears little resemblance to the actual ideology or policy priorities as represented in the Trump administration's actions. There's no better evidence for that fact than a New York Times report that revealed Thursday that the White House is pushing for Congress to reauthorize the USA Freedom Act, a law that authorizes surveillance of Americans' domestic communications.

This program, which was exposed by NSA leaker Edward Snowden, isn't currently active. It was only authorized by law after Snowden's whistleblowing.

The Times reported that outgoing Director of National Intelligence Dan Coats acknowledged in a new letter to Congress that the program was suspended when officials determined it was inadvertently collecting far more information about civilians' communications than was intended. This finding has been previously reported but not acknowledged by top officials.

Complicating matters, three other surveillance authorities primarily used by the F.B.I. are also set to expire in mid-December. They include provisions that let investigators get court orders to collect business records relevant to a national security investigation, wiretap “lone wolf” terrorists without links to a foreign power, and keep wiretapping someone suspected of being a spy or a terrorist who switches phone lines in an effort to evade surveillance.

Mr. Coats’s letter said the administration supported making those three provisions permanent as well, rather than merely subjecting them to another extension of several years, as Congress has previously done.

As the report makes clear, there's little evidence that the NSA program in question has been useful in preventing terrorist attacks, and some officials believe it is too unwieldy to be effective. Nevertheless, the Coasts and the administration have concluded it should be protected by law.