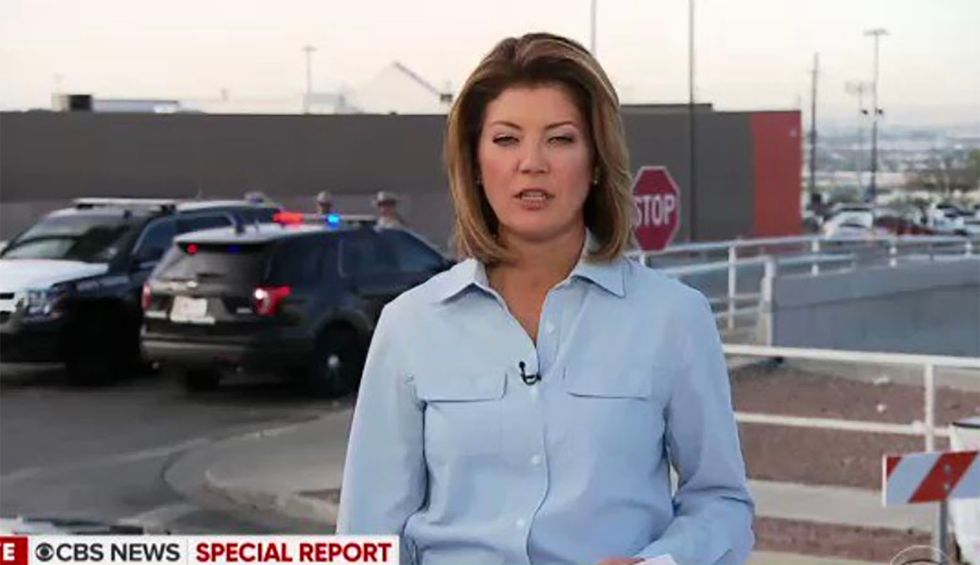 Speaking from the White House on Monday, Donald Trump prayed for the wrong Ohio city in the wake of a weekend gun rampage. Reading prepared comments (that somebody else obviously wrote for him) from a teleprompter, Trump ended his uninspiring address by saying, "May God bless the memory of those who died in Toledo. May God protect them." Of course, the shooting Trump referenced took place in Dayton, not Toledo. Yet against that backdrop of shame, CBS News quickly reported that Trump's speech was noteworthy and successful for all kinds of bogus reasons.

In a Twitter clip that has been viewed nearly 2 million times, CBS Evening News anchor Norah O'Donnell talked with White House reporter Weijia Jian. The two proceeded to give Trump credit for the comments he read off a teleprompter, and noted how quickly he supposedly condemned the attack.

JIAN: We had to wait some time in the past after similar instances. You'll remember in Charlottesville, after a white supremacy rally violence broke out, and initially the president said there were very fine people on both sides of the conflict. And after advisers, lawmakers, and Americans were in his ear urging him to condemn white supremacy, he did that ultimately. This is different, you are right. He immediately came out and said this country would not stand for it. He said they are outraged and sickened by this monstrous evil.

First off, Trump’s NRA-approved speech that CBS was so impressed with actually sounded like it was written by a gaggle of White House interns found wandering the hallways that morning. Perfunctory and often insipid, the address was the absolute least that Trump could have done as president. At a time of tragedy, when the nation turns to its leaders for words of wisdom and comfort, Trump offered up a jumbled word salad. ("Mental illness and hatred pulls the trigger, not the gun.")

Second, Trump did not "immediately" denounce white supremacy in the wake of the El Paso mass murder, which occurred on Saturday. Trump waited two entire days. And during those two days while the victims were being identified, Trump spent his time on Twitter complaining about China's trade policy and whining about how badly he was being treated by the press. Thirdly, that neo-Nazi rally in Charlottesville didn't simply result in "violence": A peaceful protester was murdered.

You can watch CBS News’ vapid take in the tweet below.

Note that in a report Monday night on the wave of hate crimes in the U.S., CBS Evening News made absolutely no mention of Trump's hate rhetoric and his consistently racist attacks. For CBS, not only is there no link between Trump's constant hate speechand the violence, but the topic doesn't even have to be addressed. Quick reminder that during a May rally, Trump joked about the idea of shooting migrants and asylum seekers who try to cross the southern border, while pushing a conspiracy theory about migrants representing an “invasion” of the country. But now that all gets flushed down the memory hole.

CBS was hardly alone in doing its best to prop up Trump following the white nationalist terror attack in El Paso. An early print edition of The New York Times'  Tuesday newspaper carried this banner, feel-good headline: "Trump urges unity vs. racism." It was soon changed, but the fact that the Times treated Trump's utterly forgettable and hollow speech as a major news story simply highlighted how desperately committed the newspaper is to normalizing him; to pretend he's just like all our other presidents during times of crisis.

Meanwhile, from The Washington Post came this headline: "Trump says white supremacy and sinister ideologies ‘must be defeated.’ Will he lead the way?" Keep in mind that we are halfway through 2019. It’s just not credible that working journalists, and especially those at The Washington Post, who have been watching Trump operate for more than two years as president, are genuinely considering the idea he will soon "lead" the nation in a fight against racism in this country. They're wondering if Trump, who spent years questioning the birthright status of Barack Obama, who started his campaign by declaring Mexicans to be rapists, who recently compared Baltimore residents to rodents and migrants to invaders, will "lead" on the issue of hateful attacks against people of color? There doesn't seem to be much mystery, just lots of journalists pretending that Trump is better than he actually is.

There's a reason that within the hate-filled manifesto written by the white supremacist killer who gunned down 50 people in New Zealand was the proclamation that Trump represents an international "symbol of renewed white identity and common purpose." Trump is now regularly referenced by white nationalist terrorists.

We are in completely uncharted territory as a nation, and the White House press corps refuses to adjust. Instead, we get reports like the ones from CBS News, the Times, and the Post, which do everything in their power to normalize Trump and present him as a mournful caretaker.