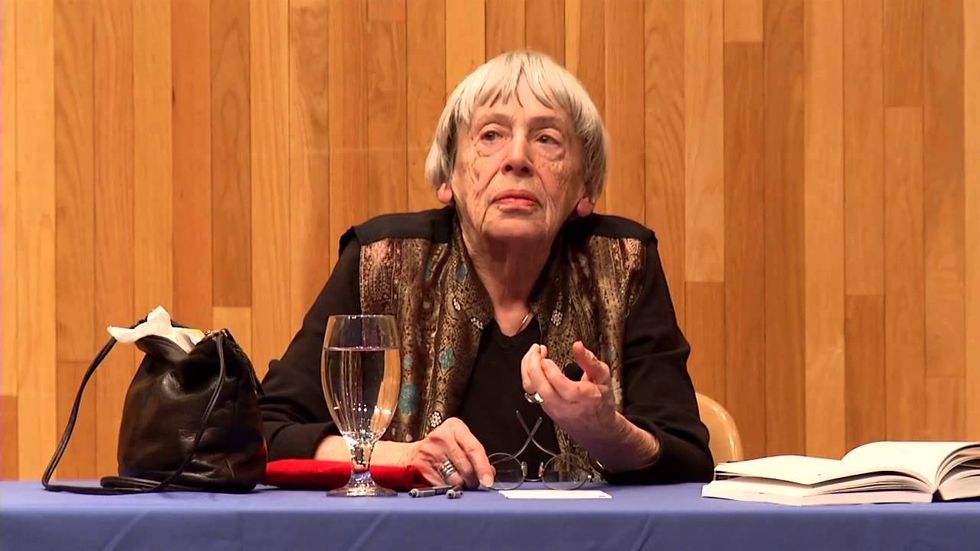 Ursula Le Guin is one of the great world builders to ever put words to paper. She tapped into the divinity that shapes the world, to craft universes for our imaginations, and then shared these imaginings until they began to change the world, this world.

“To oppose something is to maintain it. … You must go somewhere else; you must have another goal; then you walk a different road,” she wrote in The Left Hand of Darkness.

I hope my worshipful adoration in the documentary Worlds of Ursula K. Le Guin isn’t too eager. And I hope it’s crystal clear: This writer gave us years where she wrote three novels and short stories and essays that won major awards while raising three children. I think highly of her. For me, she’s Beyoncé.

Le Guin was rejected many times before anyone published her. She has this in common with Octavia Butler, and more recently with Man Booker Prize winner Marlon James. Perhaps after a lot of rejection, it becomes easier to relinquish the world of the normal or, in Le Guin’s case, the literary. Along the path of all those rejections, Le Guin struck out toward the odd and subversive and revolutionary. Whoever finally accepts your work, they are accepting what you persisted in creating. The people who finally accepted Le Guin’s visionary work were in the realm of sci-fi—her first editor had just been working with Samuel R. Delany, the charming god of complex fantasy and sex writing.

Speaking of lineage, Le Guin’s Taoism is a thread woven through every facet of her worldsview. It is thrilling to have come across her translation of the Tao Te Ching just as I was grappling with the depth of that text—and even more thrilling to see how she breathes life into the ideas again and again in The Dispossessed, in Tehanu, in Always Coming Home. Each of these worlds is so different, and yet Taoism functions across all imagining: Her characters are always learning patience, decentering themselves, relinquishing the idea of a known way, of destiny calling.

Le Guin’s writing changes the way available to the reader. Her anarchist utopia/dystopia classic The Dispossessed is a required text for movements—it’s a foundational entry into her worlds. She doesn’t take the easy road, and she doesn’t allow us as readers to be far from the core question of the text. By the end, you need to know inside yourself what freedom means to you. You need to know what you would do to have that freedom, what you would give up and what you would claim. It’s a brave text, a warrior’s text. It’s an artful critique both of capitalism and of her critics while sacrificing none of its benefits. She’s pointing at us and laughing. She’s also pointing toward freedom and inviting.

I appreciate Le Guin’s slow claiming of feminism as a movement: not just thought, but as a way of reading and living and writing. She exemplifies the feminism that I think many straight women like her long for—to be equal, while sharing the work of managing home and life with men (rather than holding more of the work and less of the support or acknowledgment).

It’s beautiful to see her husband, Charles, as a feminist man in practice. Le Guin found a love that grew with her, and in the container of writer/wife/mother, Le Guin became a radical in the way I believe most people do when given the time and space to think for themselves. Le Guin’s politics are still pushing us forward today. With a smirk and a smile, she is still teaching.

I find it so fitting that her final public acts were anti-capitalist and flagrant. Let us close this love note with some of her brilliant words, spoken at the National Book Awards in 2014: “We live in capitalism. Its power seems inescapable. But then, so did the divine right of kings.”