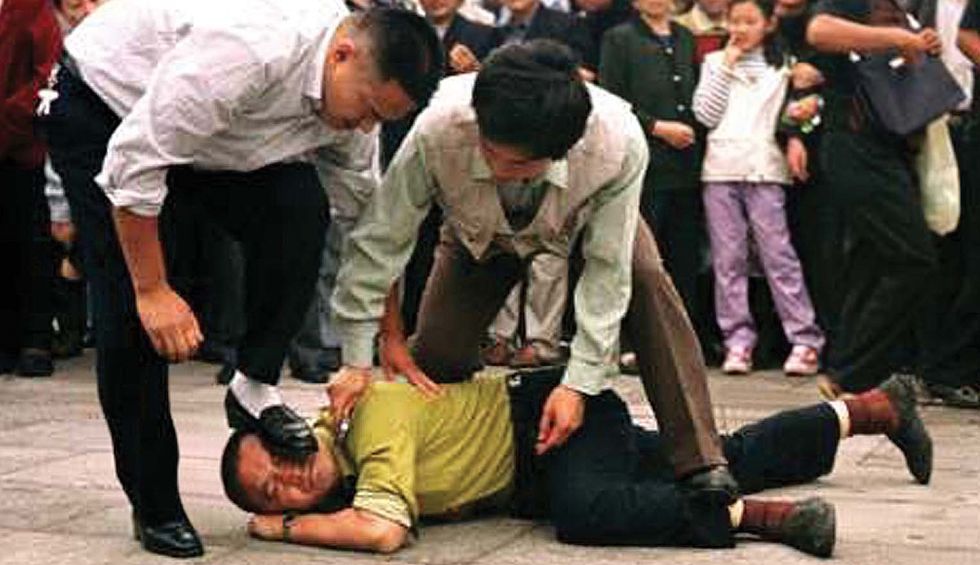 This is not the death cult you expected. While Donald Trump may regularly count on the support of people who believe that supporting Israel means making sure that every Jewish citizen of that state is handy to be either converted or slaughtered in the any-day-now End Times, this is another group of religious fanatics counting on Trump to fulfill their world (and atheist) -destroying dreams. Until recently, the contents of website The Epoch Times have been so out there, so beyond the pizzagate conspiracy theories of Gateway Pundit and the black helicopter lizard men of Infowars, that it’s been regarded as too odd to be considered part of the right-wing “mainstream.” No more. Under Trump, all bets are off. And a group that’s willing to top the online spending of Democratic candidates to express its support for Trump is definitely welcome in the fold … even if they do want him for his finger on the nuclear trigger.

It’s easy to understand why any group looking for an apocalypse might look to Trump as just the man for the job. But not every cult manages to spend more on Facebook than presidential campaigns. The leaders of the group that is counting on Trump to begin the “Last Havoc” have now spent more than $1.5 million to buy 11,000 pro-Trump spots on social media. In April alone, those ads netted 3 billion views, making this foreign-backed group one of the top video creators on the Internet and a major player in American politics.

As NBC News reports, The Epoch Times may look like just another online conspiracy site belonging to another small cult of slavish Trump followers itchin’ for some good old-fashioned smiting from above. But this “small New York-based nonprofit” is actually controlled by Falun Gong, a Chinese religious group aiming to both bring down Beijing and democracy while cheering for the end of all things. If on the surface they look like another fundamentalist site attacking science, reason, and “humanists,” it’s because they are.

Falun Gong members have been subject to some genuinely terrible oppression and abuse by the Chinese government, so it’s easy to understand why members of the group would pull for anything that might bring down Chairman Xi and his totalitarian regime. What’s less understandable is how that translates into support for Trump, considering his refusal to call out the Chinese government on anything related to human rights, and his expressed willingness to allow Xi to have his way with Hong Kong and anyone else that is “his problem.”

The connection seems to be that group members believe Trump is the guy who is ready to hate the people that they hate and maybe push the not-a-Coke button on the Resolute Desk. Their core beliefs include an upcoming judgement day in which all the Chinese officials who directed punishment their way get sent to a very special communist hell. Of course, American unbelievers, liberals, and scientists will go with them.

The level of spending and the number of views generated by The Epoch Times’ ads has turned it into a Trump favorite. They’ve been frequently retweeted by Donald Trump Jr. and by Donald Trump’s Facebook page. And “at least half a dozen times this year,” stories have been written for this fringiest of fringe sites by members of the Trump campaign.

That’s not all. The Epoch Times earned an interview with daughter-in-law Lara Trump in Trump Tower. They’ve been rewarded with interviews of Trump cabinet members. They even took the stage at CPAC and interviewed Republican members of Congress including Mark Meadows, along with “conservative stars” like new Michael Flynn attorney Sidney Powell.

The religious group still runs the occasional ad or YouTube video on religious freedom in China, but by far the majority of its work is dedicated to defending everything Trump. That means freedom-love of this group from China hasn’t stopped them from screaming about the horrors of immigration, or joining in the attacks on the religious beliefs of Reps. Ilhan Omar and  Rashida Tlaib. And it hasn’t kept them from running thousands of ads about “spy gate” and calling for indictments against the usual list of Trump targets.

There’s little doubt about why Falun Gong is hanging tight with the Trump campaign. Beyond cheering for Trump to bring it all down during what’s known as “the final period of the Last Havoc,” their beliefs mingle pseudo-ancient mysticism with “extremely conservative cultural worldviews.” That includes a belief that all atheists are bound for a properly evangelical level of eternal torture, that evolution is “a deadly idea born of the Red Specter,” and that homosexuality is a crime equivalent to international terrorism. In a strong parallel with Trump, the group teaches about “the blind arrogance of the world scientific community" and the “limits of the scientific paradigm” and attacks both archaeology and geology to defend a kind of creationism akin to that expressed by the most fundamentalist churches in the United States. The leadership emphatically does not believe in climate change, and supports climate change deniers. They support racial “purity” including miscegenation laws. Falun Gong also has no fondness for the basic idea of democracy, which is seen as too “individualistic.”

Other highlights include a belief in shape-shifting aliens who once inhabited the Earth and that Falun Gong’s leaders can both levitate and walk through walls. How that fits in with a support for Trump is unclear … but it certainly sounds like a story that would work well on Infowars. And they run a dance troop that sings about the evils of evolution, feminism, and race-mixing. If all this sounds like someone sat down in 1990 to gather up the worst of fundamentalism and Scientology then lightly covered the whole thing with a veneer of “rediscovered” ancient beliefs that never existed … you got it in one.

The persecution that Falun Gong has received in China is more than regrettable, it’s criminal. Tens of thousands of its practitioners were arrested at Tiananmen Square, and the group was deeply involved in efforts to end the rule of the totalitarian Chinese leadership … even if they were less than interested in replacing them with a secular democracy. The abuse of Falun Gong within China represents exactly the kind of human rights abuse that Trump should be fighting.

But actions in the United States show that a group ostensibly founded to defend religious freedom in another country can become a major player in the politics of the United States … so long as it puts aside those original goals and concentrates on hating the right people. And buying enough media.