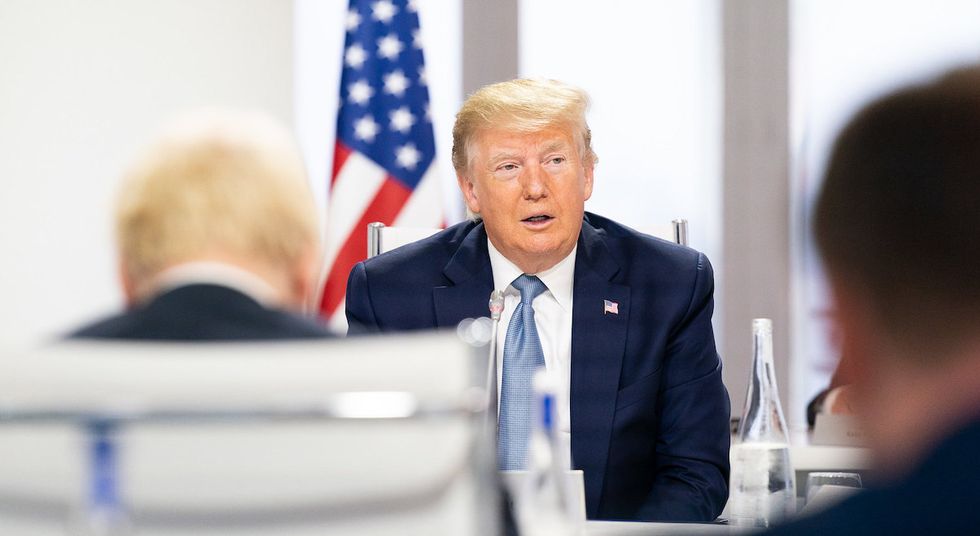 It's not clear President Donald Trump could ever get what he wants out of the G7 summits. He's torn by two conflicting desires: the desire to be loved by everyone across the world, and the desire to promote his nationalist, authoritarian, right-wing agenda, which won him power in the United States but inevitably brings him into conflict with other leading democracies.

So it was no surprise that the weekend's summit was a train wreck. Trump acted as the seventh wheel of the meeting, abandoning the other six world leaders at the most crucial event: the discussion on climate change. He was humiliated by his closest thing to an ally in the group, UK Prime Minister Boris Johnson, who said the president's tariff-fueled trade war is "not the way to proceed." Without any serious justification, Trump continued to insist that Russian President Vladimir Putin should be welcomed back into the group, despite lacking any support from the other member nations. And Meeting with Japanese Prime Minister Shinzo Abe, Trump seemed to be on a completely different page about North Korea's recent provocations.

The meeting ended with the leaders issuing a brief joint declaration, far more limited than previous communiques, obscuring the serious fractures within the coalition and deep disagreements over central issues.

To top off the troubling conclusion, Trump proposed a blatantly galling and corrupt plan: Next time, the meeting can be held at Trump Doral resort in Florida.

Former Government Ethics Director Walter Shaub said the "sheer brazenness" of Trump's plan to personally profit off not only his own position but from the coffers of American allies' governments, was surprising even for this president.

"Millions of dollars are potentially at stake in this contract," Shaub said. "And I don't even understand how he could be one of the finalists. Certainly that Trump Doral resort is not exactly cost-effective. And there are just thousands and thousands of facilities in this country — how the president could be one of the 12 that they looked at, as he says, and then potentially be the final choice, just absolutely makes no sense and undermines confidence in our federal government's procurement system."

The Washington Post recently reported of the Trump-owned venue:

Late last year, in a Miami conference room, a consultant for President Trump’s company said business at his prized 643-room Doral resort was in sharp decline.

At Doral, which Trump has listed in federal disclosures as his biggest moneymaker hotel, room rates, banquets, golf and overall revenue were all down since 2015. In two years, the resort’s net operating income — a key figure, representing the amount left over after expenses are paid — had fallen by 69 percent.

Even in a vigorous economy, the property was missing the Trump Organization’s internal business targets; for instance, the club expected to take in $85 million in revenue in 2017 but took in just $75 million.

“They are severely underperforming” other resorts in the area, tax consultant Jessica Vachiratevanurak told a Miami-Dade County official in a bid to lower the property’s tax bill. The reason, she said: “There is some negative connotation that is associated with the brand.”

Shaub noted that Trump could be violating the law if he secured the contract for the resort outside of the federal procurement rules. But even if everything was conducted above board, Shaub said, the venue would still be inappropriate, because it would inevitably give the appearance of corruption.

Sen. Ron Wyden (D-OR) issued a statement in response to the plan:

Under no circumstances should the G7 be held at Trump’s Doral resort, which would be one of the most egregious examples of corruption and self-dealing in a presidency replete with them. Trump is using the office to line his own pockets at the expense of the American people are our standing in the worlD. Requiring our allies to spend money at the president’s hotel would be an insult to them and a violation of our Constitution’s emoluments clause.”