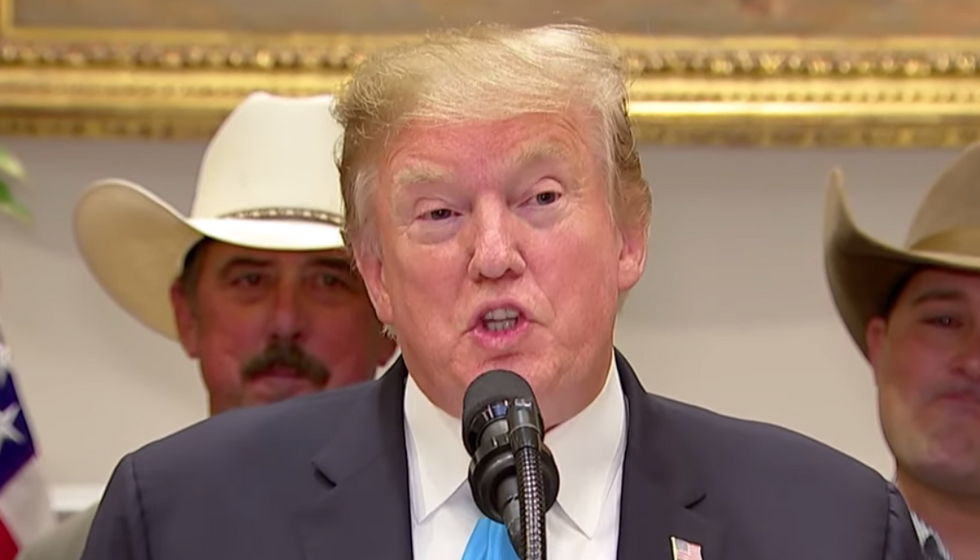 Donald Trump's propaganda apparatus is mighty — much more resilient and effective than any of his business endeavors ever were in the decades before he ran for president. While most Americans haven't bought into Trump's lies — which are up to an average of 13 a day — his base of supporters, who have way more power, in our undemocratic system, than their actual numbers justify, gobble up every ridiculous assertion emanating from the Oval Office.

But there's a good chance at last that this capacity for self-deception among Trump diehards will be tested. Economic reports increasingly warn of a coming recession, likely to be exacerbated by the pointless trade war with China, which was largely launched as an ego boost for Trump. So Trump and his allies are clinging to their favorite strategy — lying their heads off — in order to convince his followers that the U.S. economy is going great.

But it's one thing to lie about stuff that doesn't directly affect the average Fox News viewer, such as migrants at the border or the behavior of anti-fascism activists. Convincing voters that they aren't losing their jobs or taking an economic hit is a much harder trick to pull off.

On Monday, Maggie Haberman published a New York Times article reporting that Trump's main response to reports of a possibly looming recession is to go into full conspiracy-theory mode, accusing his own hand-picked chair of the Federal Reserve and the news media of conspiring against his re-election chances. As usual with Trump, there is no concern for anyone else, such as the millions of Americans who will be surely be hurt by any significant economic downturn. Only Trump matters to Trump, and he is panicked because a recession could lose him the election, which, not incidentally, would free federal authorities to arrest Trump for various alleged crimes.

"The Fake News Media is doing everything they can to crash the economy because they think that will be bad for me and my re-election," Trump tweeted Thursday, apparently seeking to spread the outrageous theory that shadowy forces would wreck the economy for the sole purpose of damaging him politically.

"Mr. Trump has repeated the claims in private discussions with aides and allies, insisting that his critics are trying to take away what he sees as his calling card for re-election," Haberman writes.

With Trump, it's never certain if he actually believes these conspiracy theories or is simply browbeating aides and underlings into toeing his propaganda line. Either way, what's clear is that his Fox News and Fox Business allies have enthusiastically embraced Trump's demands to tell him soothing lies about the direction of the economy under his, uh, stewardship.

Trump economic adviser Larry Kudlow, who is generally so wrong about everything that it's best to assume that the opposite of what he predicts is true, went on "Meet the Press" Sunday to preach the need for "optimism," saying, "I sure don’t see a recession."

Peter Navarro, another Trump economic adviser and the guru behind his trade war with China, was also on "The Week" hyping the idea that "we’re going to have a strong economy through 2020 and beyond with a bull market."

But by Monday morning, Trump's allies were going to the next level. Beyond offering dubious assurances of that everything is going well, Trump's minions are now repeating his asinine claims that the media is trying to create a recession by clapping it into existence — and that its sole motive for doing so is to dump Trump.

"[T]he only thing that can happen in this country right now that can derail this economic juggernaut is if everyone believes it's going to be derailed," declared Charles Payne at Fox News.

"The bottom line is, is there seems to be a deliberate attempt by many people to make this economy go into recession," he added.

The idea that journalists are secretly plotting to sabotage the economy in order to get Trump ought to be self-evident nonsense. It's even sillier when one realizes that the media industry is already in an economic crisis, with journalists being laid off at rates equaling those of the last recession, even during supposedly good economic times. Another recession will be absolutely devastating to journalists.

Yet we're meant to believe that journalists are not only equipped with magic powers that can will a recession into happening, but that they would use those powers to destroy their own lives and futures, all in the name of bringing down Trump. If journalists are that powerful, they should be able to finish off Trump without wrecking the economy along the way. It's not exactly hard to portray Trump as the worst living American, after all. All you need to do is quote him directly on and random subject, and the effect is worse than anything anyone could say about him.

Just as the Fox News Cabinet is happy to tell Trump soothing lies, so is his real White House team.

"[S]everal aides agree with him that the news media is overplaying the economic fears, adding to his feeling of being justified, people close to the president said," Haberman reports.

But this isn't one of those situations, as with Trump's inauguration crowd size or his fantasies about criminal gangs, where his followers can just play along with the lies, having no skin in the game. As with farmers already affected by the trade war, economic downturns are hard to ignore, since they tend to have real impacts on real people's lives, even those living in the Fox News bubble.

The question is whether this will matter, or whether Trump voters are so bigoted that they will vote for their own economic ruin, so long as their man keeps sticking it to liberals, people of color and feminists?

Those farmers Trump is screwing over are an unfortunate harbinger. Reporters keep going out to farming communities that face economic devastation due to Trump's impetuous and unnecessary trade war. They generally find that Trump-voting farmers are standing by their man, favoring their own meanest impulses over their own family's economic fortunes.  Many cling to the ridiculous hope that Trump is somehow secretly trying to save them from the effects of his own actions.

On the other hand, there is anecdotal evidence that at least a few farmers are angry enough about Trump betraying their trust that they no longer support him. Earlier this month, for instance, CNBC spoke with Ohio soybean farmer Christopher Gribbs, who is losing money due to Trump's trade war shutting down exports of soybeans to China.

"I couldn’t vote for him. I have to protect my business," said Gribbs, who voted for Trump in 2016.

It's fair to note Gribbs is part of a small minority of American farmers, and that most of whom are still backing Trump even as he strips away their livelihood. But, considering Trump only won the election because of less than 80,000 votes spread across three farm-heavy states, losing even a few of his voters could do real damage to his re-election chances.

And that's just among farmers, a relatively small group of voters even in the Midwest. Despite his claims to the contrary, Trump knows full well that he won the 2016 on a fluke and by the thinnest of margins. Even if he hangs onto the vast majority of his supporters, if just a few are scared enough by the economic worries that they vote for a Democrat or simply stay home, he'll lose. That's why he's in panic mode and cranking up the conspiracy-theory machine to top volume.

Let's not delude ourselves: Most of Trump's voters will stay on the Trump train until it crashes into a mountain. Will those who bail out in search of self-preservation be enough to save us all from a second term?