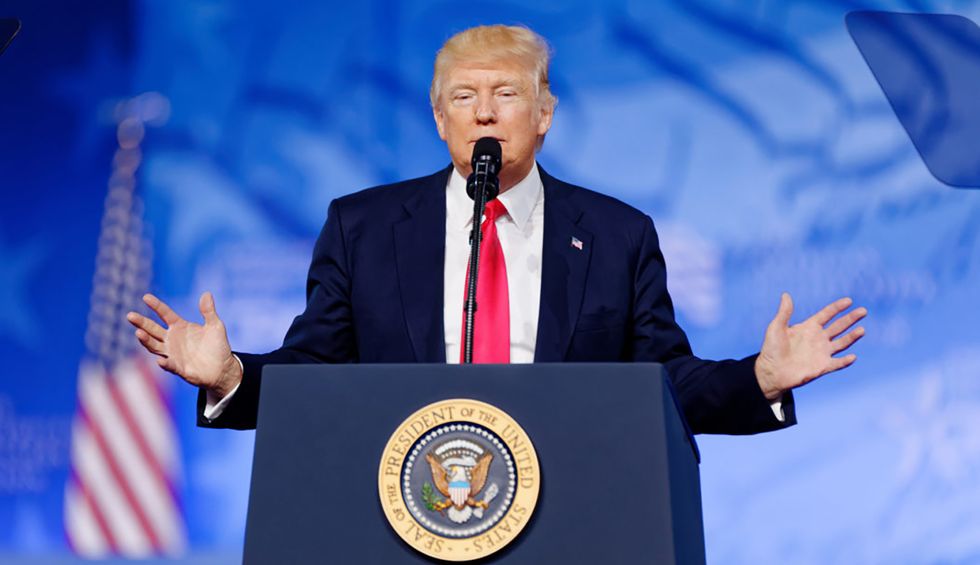 President Donald Trump got pushback Friday after saying that the NRA's views on gun control legislation will be "fully represented and respected."

Trump made the comment in a Friday morning tweet in which he called himself "the biggest Second Amendment person there is" but added that talks on "meaningful background checks" were underway between congressional leaders.

Speaking to press outside the White House Friday, Trump also said that "we need intelligent background checks, OK? This isn't a question of NRA, Republican, or Democrat."

In a statement released Thursday, LaPierre didn't reveal the content of his conversations with Trump, but said, "I can confirm that the NRA opposes any legislation that unfairly infringes upon the rights of law-abiding citizens."

To add weight to its opposition, the group has also been spending big. As CNBC reported this week,

The National Rifle Association spent $1.6 million during the first half of the year lobbying members of the House and Senate against laws that would enact stricter background checks for people looking to buy guns, according to disclosure reports.

One of the dozens of bills targeted by the NRA is H.R. 8, a bipartisan proposal that passed the Democratic-controlled House in February and has yet to be taken up by the Republican-controlled Senate. The second-quarter filing shows that NRA lobbyists continued their efforts against the bill after its passage in the House.

The NRA also used its deep pockets to get Trump in the White House, dumping over $30 million into his election campaign.

Given overwhelming public support for background checks, gun violence prevention organization Everytown for Gun Safety said Thursday it's the American people—not the NRA—that should have the ear of the president.

"More than 90 percent of Americans, including 90 percent of Republicans, support background checks on all gun sales—so President Trump should say no to the floundering NRA and yes to the American people," said Everytown president John Feinblatt.

That's something Trump didn't do after the 2018 massacre at Marjory Stoneman Douglas High School last year.

"Remember: He favored bold action after Parkland, until Wayne LaPierre started whispering in his ear," said Feinblatt. "If the president is serious about leading now, then he'll break with the NRA and tell Majority Leader McConnell to bring the Senate back and pass background checks and Red Flag legislation." Red flag laws, as The Associated Press noted, "allow courts to issue temporary orders barring someone from possessing guns based on some showing of imminent danger or a risk of misuse."

Instead of comforting those impacted or showing leadership by demanding immediate action, say progressive critics, Trump has only made matters worse this week.

Also on Friday, Amnesty International USA—which issued a global travel warning this week for anyone currently traveling to the United States in light of "high levels of gun violence"—said federal lawmakers must take decisive action on the crisis.

"Gun violence in the U.S. is a human rights crisis. This is an emergency," said Ernest Coverson, End Gun Violence campaign manager at Amnesty International USA. "It will continue to be an emergency until our lawmakers treat it as such."

"The House has passed several measures that would help reduce gun violence," said Coverson, "but the Senate has yet to bring them up for discussion even though lives are at stake."

The group says Congress should swiftly head back to Washington, D.C. and vote on gun legislation, with background checks being a starting point.

The crisis also prompted progressive group CREDO Action to launch a campaign this week to add pressure on lawmakers, with their focus spreading beyond the GOP-controlled Senate.

"Republicans are to blame for keeping gun control from becoming law and exacerbating the growing crisis of white supremacist terror, but a national catastrophe of this magnitude requires a bipartisan response. We cannot let either party off the hook," said the group.

"If Speaker Pelosi calls the House of Representatives back into session to pass gun control legislation," the group continued, "it shows that Democrats are willing to take bold action to keep us safe while Republicans hide in fear of the racist NRA."

Doing do, said CREDO Action, "is a critical step to making sure these horrific attacks never happen again."