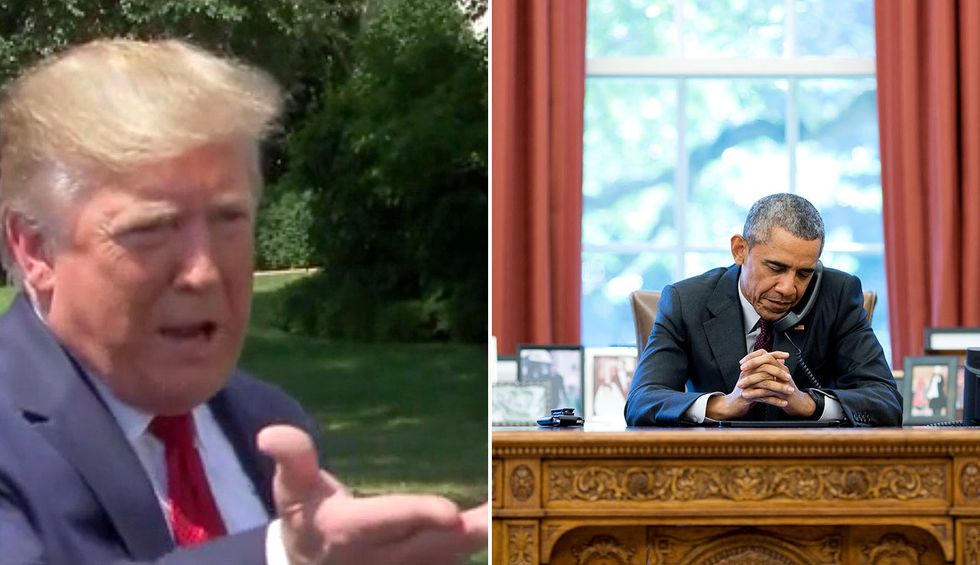 Danish Prime Minister Mette Frederiksen, responding to President Donald Trump’s offer to purchase Greenland, stressed that the island is not for sale — and Trump responded this week by canceling a trip to Denmark he had planned. Trump has maintained that he believes Frederiksen was being disrespectful, and during a press conference outside the White House on Wednesday, Trump used the cancelation as an excuse to bash former President Barack Obama — telling reporters that foreign countries, including Denmark, cannot get away with the type of disrespect they showed the United States when Obama was in the White House.

Trump told reporters, “I thought that the prime minister’s statement that it was absurd was nasty. I thought it was an inappropriate statement. All she had to do was say, ‘No, we wouldn’t be interested.’”

Trump added, “I thought it was not a nice statement, the way (Frederiksen) blew me off because she’s blowing off the United States. And we’ve done a lot for Denmark…. She shouldn’t treat the United States that way.”

Conservative writer David Frum has a theory on Trump’s decision to cancel his Denmark visit: Trump, Frum told Radio 4, didn’t really cancel because of Denmark’s stand on Greenland, but because he knew Obama planned to visit Denmark next month and feared he would be overshadowed. And Trump was clearly obsessed with Obama during the Wednesday press conference.

Trump claimed that when Obama was president, disrespecting the U.S. was the norm — whereas he demands respect for the U.S.

Trump went on to address other subjects during the press conference, from gun control to immigration. And he found other reasons to attack Obama, claiming that the policy of separating families at the U.S./Mexico border was instituted under Obama’s watch.

In addition to bashing Obama on immigration, Trump slammed him on Russia policy — claiming that Russian President Vladimir Putin got away with more under Obama than it has gotten away with under his presidency.

Watch the videos below: