Trump blasted for clueless speech on mass shootings that confused Dayton and Toledo: This 'was written in an alternative universe’ 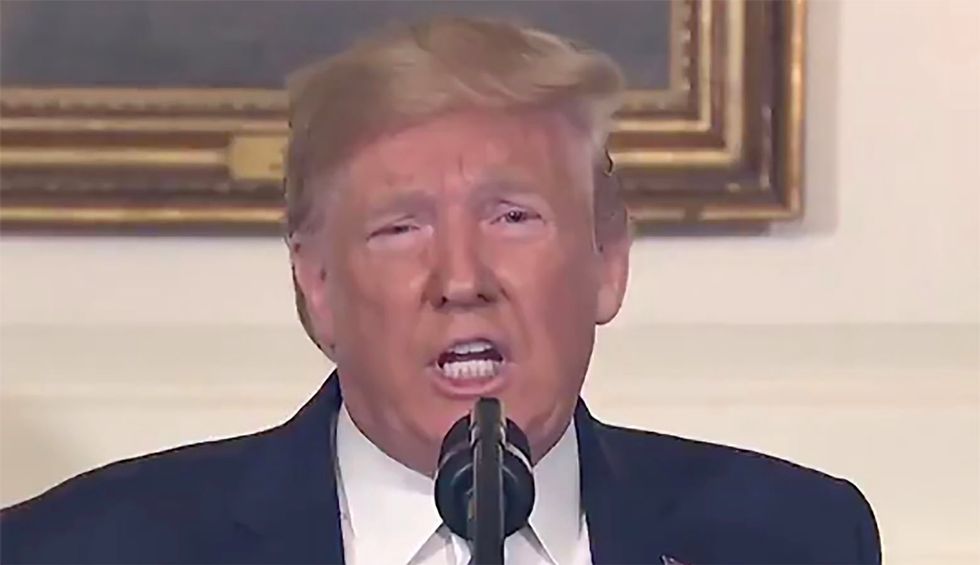 In response to the mass shootings in El Paso, Texas and Dayton, Ohio over the weekend, President Donald Trump gave a White House press conference on Monday morning. And he is being widely criticized for confusing Toledo (another Ohio city) with Dayton and stressing that “mental illness” rather than firearms should be blamed for the attacks.

“May God bless the memory of those who perished in Toledo,” Trump told reporters. “May God protect them."

Trump used the press conference to, in effect, reaffirm his support for the National Rifle Organization (NRA), declaring that “mental illness and hatred pulled the trigger, not the gun.” In response, MSNBC’s Sam Stein tweeted, “Seriously, who wrote this line? What does it even mean?” But Stein was not the only one on Twitter who had a negative reaction to Trump’s speech.

@TimothyKenison noted that Trump’s reference to mental health was hypocritical in light of the fact that he “slashed $600 million in mental health funding from the 2018 budget.” And @j_blondi03 sarcastically posted that “the NRA wrote” the “not the gun” part.

@igorbobic tweeted that Trump’s speech “sounded like it was written in an alternative universe where none of the things Trump did over the last month happened.”  Rep. Tim Ryan of Ohio tweeted, “Toledo, fck me,” and @srosen126 posted, “Was there an attack in Toledo?”

@jesseltaylor posted, “Trump just blessed the memories of those who perished in Toledo, which all the mourning families in Dayton really appreciate.”

@ksenijapavlovic denounced Trump’s press conference as “smoke and mirrors” and a demonstration that politicians lack “the guts or willingness” to “take on” the NRA.”

@soonergrunt lambasted Trump for showing “no emotion whatsoever” and went on to say, “I didn't agree with George W. Bush on much of anything, but you could at least tell the man had a soul.”

It’s like this speech was written in an alternative universe where none of the things Trump did over the last month happened
— Igor Bobic (@Igor Bobic) 1565014447.0