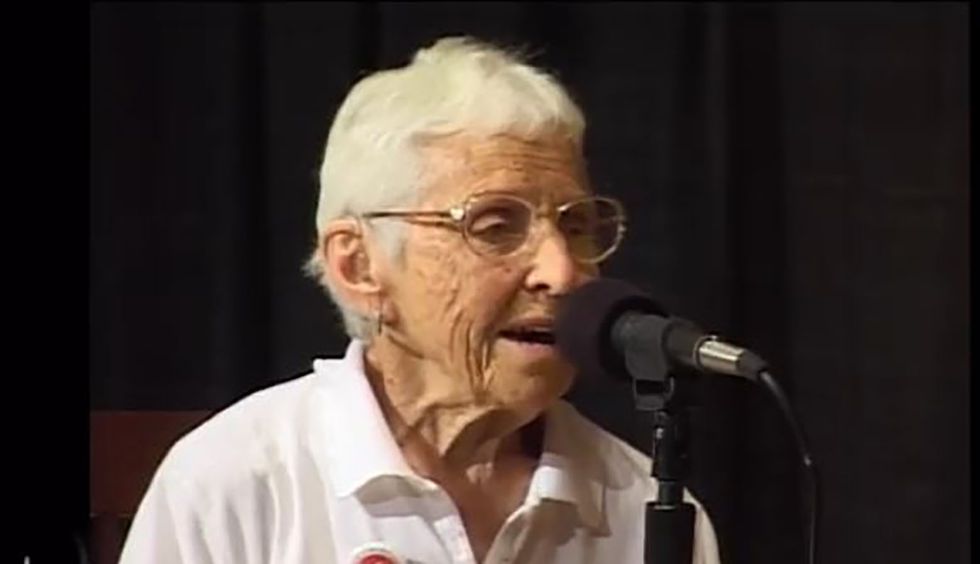 The legendary peace activist Frances Crowe died this week at the age of 100 in Northampton, Massachusetts. Over the past seven decades, Frances had been arrested countless times while protesting war, nuclear weapons, nuclear power and the construction of new pipelines. She is survived by her two sons, a daughter and an international community of peace activists. We revisit a 2005 interview of Frances Crowe by Amy Goodman and recognize her lifetime of advocacy.

AMY GOODMAN: This is Democracy Now! I’m Amy Goodman. We end today’s show remembering the legendary peace activist Frances Crowe, who died on Tuesday at the age of 100 in Northampton, Massachusetts. Over the past seven decades, Frances has been arrested countless times protesting war, nuclear weapons, nuclear power. She was a war tax resister, refusing to pay taxes to support the sprawling Pentagon budget. She opposed South African apartheid and U.S. intervention in Central America in the 1980s and in Iraq and Afghanistan in the 2000s. She climbed fences in the Seneca Army Depot and was arrested for pouring her own blood on a newly built Trident nuclear submarine just before it was launched in Connecticut. Frances Crowe was last arrested at the age of 98, protesting the construction of a new pipeline.

In 2005, I interviewed Frances Crowe in front of a live audience in her town of Northampton, Massachusetts. She described how she became a peace activist on August 6, 1945, the day the U.S. dropped the first nuclear bomb on the Japanese city of Hiroshima. At the time, her husband Tom was a physician in the Army Medical Corps.

FRANCES CROWE: I was a bride. My husband was in the Medical Corps in the Army. He had told me a few weeks before that he had heard rumors that we were developing this incredible weapon. And he was at sea when we dropped the bomb, but I was alone in our apartment in New Orleans. And when I heard it on the radio, I really unplugged the iron, left the placemat that I was ironing, and went out looking for a peace center in the streets of New Orleans.

AMY GOODMAN: And then what happened?

FRANCES CROWE: And then, you know, slowly, we kept moving in the direction of working for change. My husband, when he was discharged, he went to the University of Rochester, where he was studying radiology. And there, of course, the head of the Manhattan Project had been Leslie Groves from the University of Rochester. So that was a challenge. But eventually we ended up in Northampton, and it was fertile ground for organizing, I found, in the early '50s. There were a lot of people very concerned about the atmospheric testing of weapons. So, a friend and I set up a Women's International League for Peace and Freedom. My husband worked with the Physicians for Social Responsibility. And we’ve just continued.

AMY GOODMAN: Frances Crowe, how did you move from peace activism to media activism? What is the connection that you see?

FRANCES CROWE: After 28 years of trying very hard to organize on issues of peace and justice locally, I finally came to the realization that the only way we were going to bring about change in this country was to have independent community radio. And I had tried to get our local NPR station to carry Democracy Now!, and they had refused. And we worked on the University of Massachusetts station, and they also turned us down.

So, finally, when a friend, I heard, was broadcasting from the top of a mountain Democracy Now!, I got in touch with him and said — you know, the road was about to close, and we couldn’t do it in the wintertime, although he was on the air every afternoon from 4:30 to 5:30, so we tried to get several other venues in Northampton where there would be higher spots. So, finally, we said we’ll try my backyard. So I put a pole up, and we were on the air. And, you know, I’ve never broken a law that I felt better about. It gave me a large charge every day.

AMY GOODMAN: By any means necessary. Frances Crowe, speaking in 2005. Thanks to her efforts, Democracy Now! is now heard daily on WMUA at the University of Massachusetts. When I spoke to her last week to say goodbye, Frances said bringing Democracy Now! to the Pioneer Valley was one of her proudest acts.

Frances Crowe was also featured in Robbie Leppzer’s 2019 documentary Power Struggle about the grassroots resistance movement to shut down the Vermont Yankee nuclear power plant. This excerpt begins with Frances Crowe heading to engage in civil disobedience at the plant one month after the 2011 nuclear meltdown at Fukushima in Japan. The clip begins with fellow peace activist Jean Grossholtz asking Frances if she’ll be bringing her cane to the protest.

JEAN GROSSHOLTZ: You gonna bring your stick with you?

JEAN GROSSHOLTZ: Well, see, I don’t bring mine anymore, because they’ve taken so many of mine away from me, you know.

JEAN GROSSHOLTZ: I had some good ones. I had a stick, it had a whole thing on the end.

FRANCES CROWE: So I just need to take my ID for when we’re arrested. My problem is my balance isn’t good.

JEAN GROSSHOLTZ: Yeah, well, mine isn’t, either. I fall all the time. I fell in a mud puddle, walking the dogs the other day. My jacket, my boots, I was completely covered in mud.

FRANCES CROWE: Well, my problem was, I fall down, I can’t get up.

JEAN GROSSHOLTZ: Well, there’s that, too.

HATTIE NESTEL: Mary-Ann is going to be the lead car, and, Susan, you’ll be the second car. If we go through the first set of gates, which will be open, we’ve breached security. And then, probably, the second set would be open, and they would be in the process of shutting it as we were walking towards that. And so, then that could be the gate that we would chain shut. So, we’re all going to be arrested. There’s no doubt about that.

MARY-ANN DEVITA PALMIERI: So, backseat folks, especially you, if you see a policeman, just somebody duck, because I’m only supposed to have four. We just don’t want to be stopped, and then we’ll get a ticket.

FRANCES CROWE: I’m here because I think this is very dangerous. We’re facing the end of life on this planet if we don’t do something about nuclear power. When I heard about Fukushima, you know, I was devastated. I felt I’ve got to get there at Vermont Yankee, because it’s our potential Fukushima.

SHUT IT DOWN AFFINITY GROUP: We must take this action and shut it down now. No more accidents. No more leaks. No more lies. No more. Enough.

SHUT IT DOWN AFFINITY GROUP: Shut it down now.

SECURITY: We would like you to leave, because you are trespassing on Vermont Yankee, Entergy property.

FRANCES CROWE: Well, I’ve done everything that I know of to do, and all I have left is my body and to put it in the way to say no. When people ask me, “How many times have you been arrested?” and I say, “Not enough.”

AMY GOODMAN: Frances Crowe, speaking in 2011. The Vermont Yankee nuclear power plant was shut down three years later. Frances Crowe died on Tuesday at the age of 100. She was in hospice, surrounded by her family and friends, survived by her two sons, a daughter and a global community of activists in the peace-loving community around the world.

And that does it for today’s broadcast. To see our interviews with Frances Crowe and Greta Thunberg, you can go to democracynow.org. Passing the torch.