New Jersey mayor launches a long, bigoted attack at the LGBT community as an ‘affront to almighty God’ 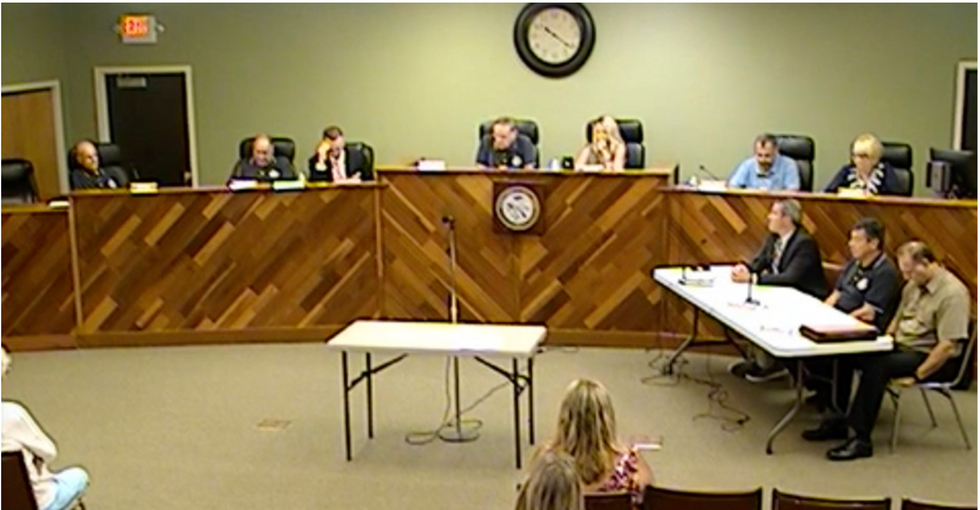 Insisting “there is no hate or bigotry intended,” Barnegat, New Jersey Mayor Alfonso Cirulli on Tuesday called the LGBTQ community “an affront to almighty God” during a public meeting of the Township Committee, as he blasted a new state law that requires schools to include in their curriculums the social, political, and economic contributions LGBTQ people have made to society, as the Asbury Park Press reports.

Mayor Cirulli, who says he is a retired educator, warned of what he labeled the “serious psycologic affects” [sic] to adolescents and young children the impending LGBT curriculum will have. He did not detail what those would be, but said they would have “serious consequences.”

Cirulli says kids always get picked on, “for being overweight, ethnic, racial, or whatever their problems are,” as he wrongly claimed students are protected by federal law, and “all the schools do a fantastic job” of protecting at-risk students.

“We’ve crossed over the line into absurdity,” by passing a law that requires students to learn about LGBTQ people, he said, in an angered tone. And he said is fulfilling his duty to “protect” township residents by railing against the state law.

Mayor Cirulli told the committee that the new LGBTQ education law is so “serious” that lawmakers must ‘reverse” it, or residents must “vote them out.”

Ironically, he told the council members, “no group has a right to force others to comply with their beliefs, deprive them of their First Amendment rights, and strip them of their parents of how to morally raise their children.”

The mayor, who spoke uninterrupted, expressed his outrage that parents are not allowed, he says, to opt out their children from being taught the curriculum.

“Sexual preference is a mindset,” Cirulli continued, again, without interruption. “Don’t confuse this with racial or ethnic discrimination. There is no comparison.”

After that outburst against same-sex marriage Mayor Cirulli went on to disparage transgender people, claiming that “a male can just say he is a female, and vice versa,” which is absolutely false.

He then went on to call the federal Equality Act, a bill that will not see debate on the Senate while the GOP is in control, “dangerous.”

“Politicians have no right to promote the LGBT agenda through laws that are intended to destroy religious freedom, especially our Jewish and Christian heritage,” he charged.

“The LGBTQ movement is out to crush anybody or any faith that doesn’t embrace their chosen lifestyle,” Mayor Cirulli said, falsely.

“The Equality Act, which leads to the teaching of – and this is what LGBTQ stands for – radical lesbian, gay, bisexual, transgender, questioning, or queer ideology in school curriculum nationwide.”

“For people of faith, make no mistake that this political movement is an affront to almighty God,” Cirulli ranted, “with the intent of completely trying to completely eradicate God’s law and the foundation that this nation was built on.”

“The bible tells us that they will try, but not succeed, and will pay an eternal price for their rebellion,” the mayor added.

His rant did not end there, but spoke for about 15 minutes in total attacking his own constituents, and every LGBTQ person in America, and their allies.

The full video, which goes on with no objection from anyone on the council or in the room, can be watched on the Barnegat Township website.