Memo to mainstream journalists: Can the phony outrage -- Bernie is right about media bias 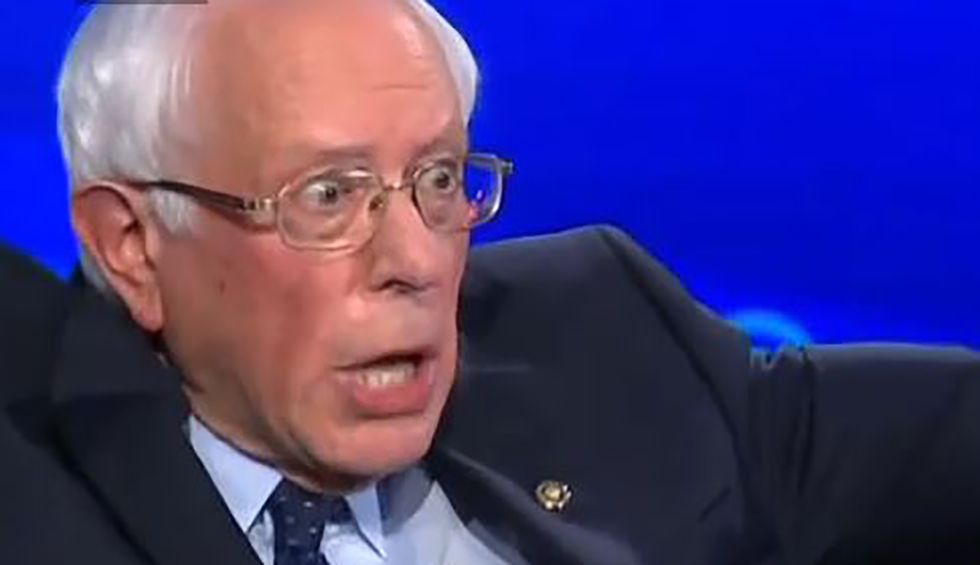 Mainstream journalists are having a ridiculous hissy fit over Sen. Bernie Sanders’ suggestion that there may be a connection between the owner of a news outlet and the content or biases of that outlet’s coverage.

If Sanders had suggested that Rupert Murdoch’s ownership of Fox News impacts its coverage, few would argue with him.  But Sanders referred to Amazon CEO Jeff Bezos’ ownership of the Washington Post — a corporate centrist outlet. And the senator, an Amazon critic, complained that the newspaper “doesn’t write particularly good articles about me.”

Are they deluding themselves? Or sincerely clueless?

I worked in and around mainstream TV news for years, including at corporate centrist outlets CNN and MSNBC. Unlike at Fox News (where I’d also been a paid contributor), there’s almost never a memo or direct order from top management to cover or not cover certain stories or viewpoints.

But here's the sad reality: There doesn’t have to be a memo from the owner to achieve the homogeneity of coverage at “centrist” outlets that media watchdog groups like FAIR (which I founded) have documented in study after study over the decades.

It happens because of groupthink. It happens because top editors and producers know — without being told — which issues and sources are off limits. No orders need be given, for example, for rank-and-file journalists to understand that the business of the corporate boss or top advertisers is off-limits, short of criminal indictments.

No memo is needed to achieve the narrowness of perspective — selecting all the usual experts from all the usual think tanks to say all the usual things. Think Tom Friedman. Or Barry McCaffrey. Or Neera Tanden. Or any of the elite club members who’ve been proven to be absurdly wrong time and again about national or global affairs.

And then ask yourself why someone like Noam Chomsky can be quoted regularly in the biggest mainstream outlets abroad, but almost never in mass media in his own country — even though he mostly analyzes the policies of his own country’s government.

Bernie Sanders is one of the world’s most effective critics of Jeff Bezos and the fact that Amazon paid no federal income tax last year. And the Bezos-owned newspaper has exhibited an unrelenting bias against Sanders in recent years — perhaps most acutely in March 2016, when FAIR analyst Adam Johnson famously wrote an article that quickly went viral: “Washington Post Ran 16 Negative Stories on Bernie Sanders in 16 Hours.” Among the Post's headlines during that period: “Five Reasons Bernie Sanders Lost Last Night’s Democratic Debate,” followed an hour later by “Bernie Sanders’s Two Big Lies About the Global Economy,” followed a few hours later by “Even Bernie Sanders Can Beat Donald Trump.”

The day after this anti-Bernie barrage, which included a half-dozen articles on how badly he’d performed in the Michigan Democratic primary debate with Hillary Clinton, Sanders shocked the Post and the rest of the political establishment by defeating Clinton in Michigan’s primary.

If you still want to believe there’s no connection between corporate media ownership and content, join me in a mental exercise: Imagine how quickly heads would roll at the Post in the fantastical event that it somehow produced even three negative stories about owner Jeff Bezos in a few hours. (Needless to say, there’s much to critically report about Bezos, including Amazon’s tax avoidance, labor exploitation, taxpayer subsidies and CIA contracts.)

I said above that there’s “almost never a memo or order from top management” to newsroom journalists. In normal times, the media system works smoothly without top-down directives. But in times of crisis, such as during the run-up to the 2003 invasion of Iraq — when I was a senior producer of MSNBC’s primetime Phil Donahue show — there may well be orders and memos.

As the invasion neared, top management at MSNBC/NBC News ordered us to bias our panel discussions. If we booked one guest who was antiwar on Iraq, we needed two who were pro-war. If we booked two guests on the left, we needed three on the right. When a producer proposed booking Michael Moore, she was told that three right-wingers would be required for balance. (I thought about proposing Noam Chomsky as a guest, but our stage couldn’t have accommodated the 28 right-wingers we might have needed for balance.)

During that period, we were told by MSNBC brass that invasion opponent Ramsey Clark, a former U.S. attorney general, should not appear on the channel. Apparently, some sort of blacklist.

When the Donahue show was terminated three weeks before the Iraq invasion, internal memos that had circulated among top NBC News executives actually leaked. (God bless whistleblowers!) One memo said that Phil Donahue represented “a difficult public face for NBC in a time of war. . . . He seems to delight in presenting guests who are antiwar, anti-Bush and skeptical of the administration’s motives.” The memo described a dreaded scenario in which the Donahue show would become “a home for the liberal antiwar agenda at the same time that our competitors are waving the flag at every opportunity.”

My point is a simple one: Our corporate-owned media system too often functions as a corporate-friendly propaganda system, and it operates smoothly. It typically operates without orders from the owner or top management, and without firings for blatantly political reasons.

At MSNBC in those months, we were ordered to bias our content. Memos were written. I don’t know that orders were given in all the other big TV newsrooms. Yet, the content was amazingly homogeneous.

How else do you explain this finding from FAIR? In the two weeks surrounding Secretary of State Colin Powell’s inaccurate, pro-invasion presentation to the UN in February 2003, there were 393 on-camera sources discussing Iraq on the nightly newscasts of ABC, CBS, NBC and PBS. Only three of them represented the antiwar movement. That’s less than 1 percent of the total.