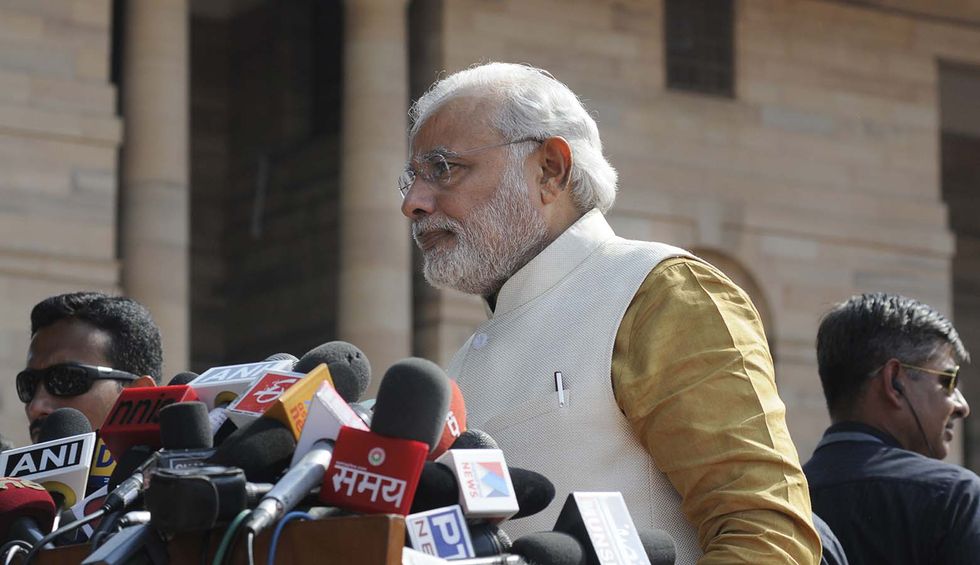 Indian Prime Minister Narendra Modi’s decision on August 19 to telephone U.S. President Donald Trump was a smart diplomatic move. Trump had told Pakistan’s Prime Minister Imran Khan on August 16 that he’d speak to Modi on Kashmir and India-Pakistan tensions. Modi didn’t wait for the call; he reached out himself.

Modi hadn’t spoken to Trump after the controversy erupted in late July following the latter’s disclosure that he’s willing to meditate on the Kashmir issue. The two leaders are due to run into each other this weekend on the sidelines of the G7 summit meeting in Biarritz, France.

It’s good that the ice has been broken before any encounter over the weekend and, importantly, to insert in advance some “talking points” other than Kashmir and India-Pakistan relations.

Of course, this phone conversation on Monday took place against the backdrop of the UN Security Council (SC)’s consultative meeting in New York on the “India-Pakistan questions” last week. Despite the brave face put on it by Delhi, the fact of the matter is that it couldn’t prevent such a meeting, and that alone becomes a diplomatic setback with likely downstream consequences, especially if the ground situation in Jammu and Kashmir (J&K) deteriorates and India-Pakistan tensions cascade—and all this when Trump is in some urgency to reach an agreement with the Afghan Taliban.

Delhi has fallen into the Pakistani trap by trying to match Prime Minister Imran Khan’s rhetoric. Imran Khan’s hot-blooded counterparts in India have rushed into turfs where angels fear to tread and said terrible things, which were absolutely unwarranted since the Indian domestic public opinion is largely supportive of the Modi government on the issue of abrogation of Article 370—unlike the case with Imran Khan, who has to ride the wave of public anger in Pakistan over the human rights situation in J&K.

This slugfest only contributes to reinforcing the growing international perception that a nuclear flashpoint is reaching South Asia. The vacuous Indian strategic community has made matters worse by promptly wading into profound intellectual discourses on India’s (outdated) nuclear doctrine and a thrilling 2.5-war scenario.

Therefore, Modi’s phone call to Trump will help restore a degree of sanity to the Indian statecraft and diplomacy.

Conversations at the highest level of leadership remain highly privileged information and the prime minister’s office (PMO)’s press release, reproduced below, may have only grazed the tip of the iceberg:

“Prime Minister Shri Narendra Modi had a telephone conversation today with US President H.E. Mr. Donald Trump. Their thirty-minute conversation covered bilateral and regional matters and was marked by the warmth and cordiality which characterises the relations between the two leaders.

“The Prime Minister recalled their meeting in Osaka on the margins of G-20 summit in end-June earlier this year.

“Referring to their bilateral discussions in Osaka, the Prime Minister expressed the hope that the Commerce Minister of India and the US Trade Representative would meet at an early date to discuss bilateral trade prospects for mutual benefit.

“In the context of the regional situation, the Prime Minister stated that extreme rhetoric and incitement to anti-India violence by certain leaders in the region was not conducive to peace. He highlighted the importance of creating an environment free from terror and violence and eschewing cross-border terrorism without exception.

“The Prime Minister reiterated India’s commitment to cooperate with anyone who followed this path, in fighting poverty, illiteracy and disease.

“Recalling that today marked the one hundred years of the Independence of Afghanistan, the Prime Minister reiterated India’s longstanding and unwavering commitment to work for united, secure, democratic and truly independent Afghanistan.

“The Prime Minister stated that he appreciated remaining in regular touch with President Trump.”

Nevertheless, prima facie, the Indian approach to the conversation has been tactful by prioritizing the topic dear to Trump’s heart—tariffs and trade, access to the Indian market, Harley-Davidson motorbikes, et al—and to have the Kashmir issue embedded deep inside it.

Personally speaking, I would have loved to be a fly on the wall when Modi broached his exchanges with Trump in Osaka almost two months ago. We’ll never get to know what really transpired in their extended exchanges in Osaka, especially the ones without aides, but it is interesting that Modi is still unwilling to refute Trump’s claim that he was approached by the PM to mediate on Kashmir.

Again, the PMO press release is largely for domestic consumption and it keeps us in the dark about any exchanges regarding an intervention by Trump with Imran Khan in the coming days or weeks.

Indeed, the “unknown unknown” is whether a meeting would still take place between Modi and Imran Khan on American soil in the near future. A Pakistani report Tuesday claimed that back channel contacts between Delhi and Islamabad had all but reached understanding apropos such a bilateral meeting in New York in September, but then all hell broke loose over the Article 370 move by Modi’s government, which apparently caught the Pakistani leadership by surprise.

We don’t know how far the Pakistani report is to be trusted, but then, so far there has been no Indian disclaimer.

To my mind, the roof isn’t going to come down if Trump can lend a hand to tamp down tensions and nudge the Indian and Pakistani leaders to talk. The point is, the Kashmir issue has been internationalized, and if the downhill slide in India-Pakistan relations continues, UN intervention becomes all but certain, and it may turn out to be intrusive.

Of course, that doesn’t mean that India will buckle under pressure, but an attrition is bound to set in over time, and statesmanship lies in anticipating events and assessing whether on balance such developments would be to India’s advantage. (See my op-ed in the Tribune titled “US Interests and UN Intrusion.”)

Quite obviously, the past fortnight has inflicted collateral damage on the process of improvement of relations between India and China following the Wuhan summit meeting in April last year. This part surely leaps out of the myth of Sisyphus—pushing a rock up a mountain; upon reaching the top, the rock would roll down again, leaving Sisyphus to start over. Modi can do far better than that so soon after such a great political consolidation in the 2019 poll.

No matter what the Sinophobic Indians might rush to celebrate, the fact of the matter is that China is not seeking exacerbation of India-Pakistan tensions. On the contrary, it actually has much to lose if the situation deteriorates.

Fundamentally, when the dust of the UN SC meeting settles down, it will emerge that China’s stance on Kashmir issue has not changed. To expect China to disengage from its “iron brother” is unrealistic. The Indian ingenuity lies in getting China to moderate the Pakistani policies, which it has been lately doing.

A commentary in the Global Times on August 18 titled “Pakistan Unrelenting on Kashmir Issue” gave the following assessment:

“Pakistan is taking an intransigent attitude in words and politics, but the country is still restrained in action. Khan needs to say strong words to pacify Pakistani people…

“As for China-India relations, India’s move will neither change the LoC on [the] China-India border, nor affect China or China’s sovereignty. China’s attitude toward the Kashmir issue is generally neutral. China does not want to see an armed conflict between India and Pakistan, and we hope that the two countries can resolve their disputes peacefully. India is always against any third-party mediation… In the end, only India and Pakistan can eventually resolve Kashmir disputes.”