In retrospect, it's clear that the Tea Party was a nascent fascist movement 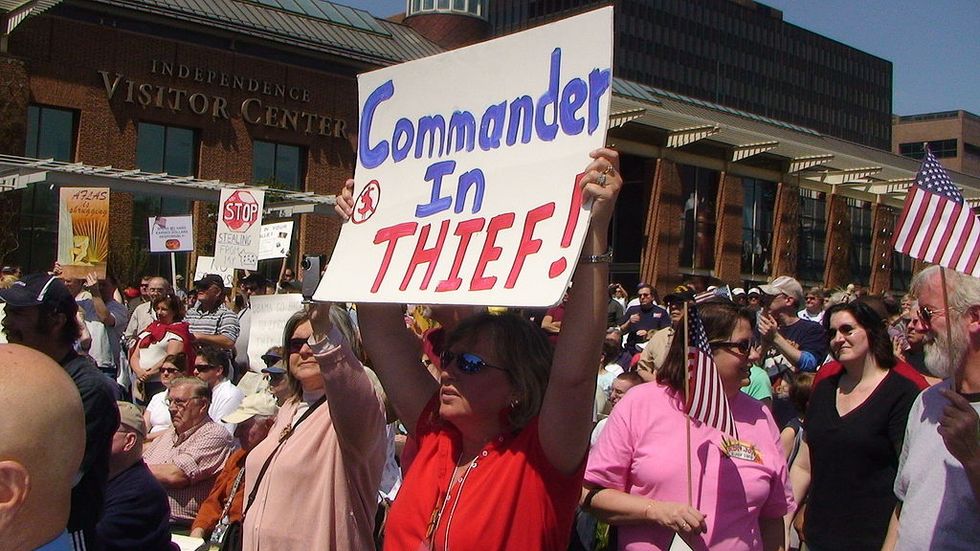 It wasn’t long ago that John Boehner, who was then the Speaker of the House, said that Barack Obama would not get another nickel out of the US Congress until federal spending was under control. He agreed with the president about the need for fiscal stimulus to juice up a national economy still reeling from the 2007-2008 panic.

Bloomberg reported Monday that the current deficit is growing faster than predicted. Sarah McGregor wrote that it “grew to $866.8 billion in the first 10 months of the fiscal year, up 27 percent from the same period a year earlier … That’s wider than last fiscal year’s shortfall of $779 billion—which was the largest federal deficit since 2012.”

The conventional wisdom is that Donald Trump changed the GOP, especially its Tea Party faction, so that it doesn’t care anymore about deficits and debt. Trump’s “economic nationalism” uprooted the old conservative orthodoxy that held that Washington governs best when it governs least. Post-Trump, there’s room for state intervention into the economy (think: tariffs) and the lives of Americans. Trump’s impact has been so great that so-called “movement conservatives” have tailored their ways of thinking to his, dubbing their new approach “national conservatism.”

But the conventional wisdom is based on a lie.

There would not be a President Trump without first a Tea Party.

The Tea Party really was an ideological revolution inside the Republican Party, according to social scientists Vanessa Williamson, Theda Skocpol, and John Coggin. In the past, the problem for movement conservatives was the very existence of federal entitlement programs like Social Security and Medicare. The old guard, as you might call them, was bent on unraveling the expansion of the US government that took place in the 1930s (New Deal) and 1960s (Great Society). But the vanguard was different.

For them, the problem wasn’t entitlements.

For them, the problem was who was getting what.

This was always historically true, but after the election of America’s first black president, the who in that question was of utmost importance. Opposition to Obamacare was not opposition to “government-run health care.” It was opposition to “‘handouts’ to ‘undeserving’ groups, the definition of which seems heavily influenced by racial and ethnic stereotypes,” Williamson, Skocpol, and Coggin said in 2011.

Tea Party concerns exist within the context of anxieties about racial, ethnic, and generational changes in American society. Previous scholars, including Martin Gilens, have noted connections between racial stereotyping and opposition to parts of US social provision, particularly “welfare” for poor mothers. … We explain how Tea Party reactions and attitudes fit into this picture (the italics are mine).

It takes just one step more to get to where we are now, as the administration slaps punitive new conditions of legal immigrants, as border agents shoot rubber bulletsacross the Rio Grande at picnicking families, as states demand work for food stamps, as children are confiscated from mothers, as fathers are disappeared, and as a Trump official says the Statue of Liberty should read: “Give me your tired and your poor who can stand on their own two feet, and who will not become a public charge."

In other words, there is an unbroken ideological chain connecting “we’re broke” to “build the wall.” The difference is how we’re seeing it. Back then, we saw the Tea Party as a legitimate political force in the constitutional order. Sure, adherents were extremist, but as Goldwater once said, “extremism in the defense of liberty is no vice.”

Now, however, it should be clear the Tea Party was a nascent fascist movement that exploited the tools, rights and privilege of an open liberal democracy to take over a Republican Party collapsed on itself in the wake of war and recession, and that paved the way for a fascist American president. It should be clear by now, if we take this to its final conclusion, that the GOP has become a party of illegitimate politics.