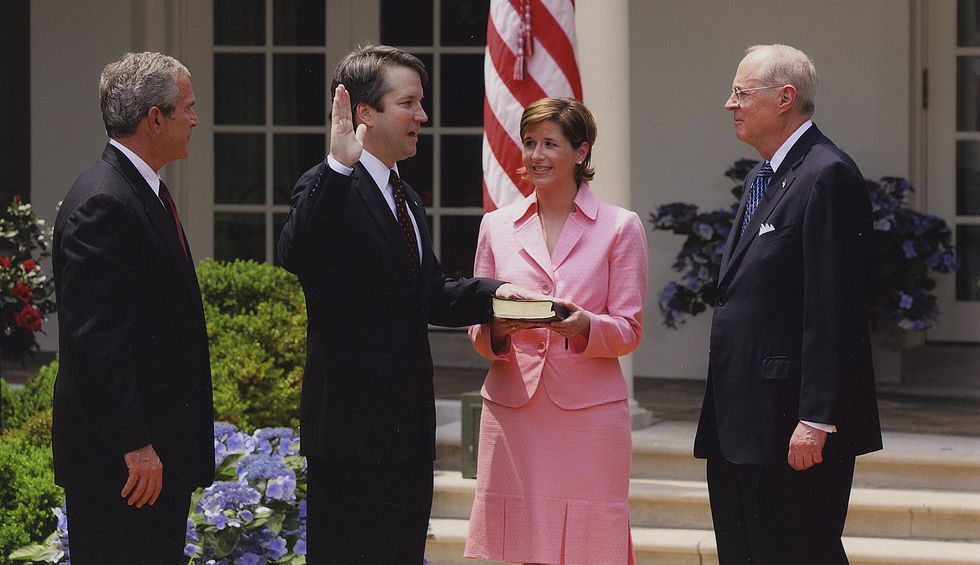 By Unknown - WhiteHouse.gov: A Remarkable Career in Photos: Judge Kavanaugh to Testify Before the Senate, CC BY 3.0, https://commons.wikimedia.org/w/index.php?curid=72409623
Jessica Corbett
and
Common Dreams
August 07, 2019The Right Wing

"This is big," Brian Fallon, executive director of the advocacy group Demand Justice, tweeted Tuesday. In a statement, he added that "this is a critical first step in conducting the real investigation of Brett Kavanaugh that Senate Republicans prevented from happening."

Despite credible allegations of past sexual misconduct against Kavanaugh and concerns about how the judge's far-right views on various issues could shape the country's future laws, he was narrowly confirmed to the high court by the Republican-held Senate in October, following what critics called a "sham confirmation process."

Critics slammed then-Senate Judiciary Chairman Chuck Grassley (R-Iowa)—who oversaw the confirmation hearings—for declining to fight for all the records from Kavanaugh's time in Bush administration. Kavanaugh began working in the White House Counsel's Office in 2001, then served as White House staff secretary from 2003 to 2006.

"In the coming year, the Supreme Court will again address important matters regarding civil rights, criminal justice, and immigration. The court may also review certain high-profile cases related to reproductive rights, the separation of powers, and the limits of executive authority—all topics within the jurisdiction of the House Judiciary Committee," wrote Nadler and Johnson. "Now and as always, the court's fidelity to the principles of equal and impartial justice, as well as the public's faith in the integrity of the judiciary, are foundational to maintaining the rule of law."

Demand Justice's Fallon applauded the pair of lawmakers for requesting that the records be turned over to the House Judiciary Committee immediately and then released in full to the public.

"These documents could prove that Kavanaugh lied under oath to the Senate," Fallon noted. "They may also shed light on his true views on issues like Roe v. Wade, and reveal biases that should disqualify him from hearing abortion-related cases in the future."

Demand Justice was among the more than two dozen organizations that, earlier this year, pressured House Democrats to investigate the Senate's confirmation for Kavanaugh, who was a judge on the U.S. Court of Appeals for the District of Columbia Circuit between serving on the Supreme Court and working in the Bush administration.

In a pair of tweets on Tuesday, NARAL Pro-Choice America president Ilyse Hogue thanked Nadler "for his critical leadership and unwavering commitment to get to the truth."

"Too many worked too hard to hide the real Brett Kavanaugh from us during confirmations," Hogue wrote. "With so much on the line, justice requires truth."

Nan Aron, president of the progressive advocacy group Alliance for Justice, concurred—writing in a series of tweets that "this request for documents is a critically important step toward fleshing out the woefully inadequate record of Brett Kavanaugh's career that Senate Republicans insisted was enough to confirm him."

"Alliance for Justice and many civil rights organizations have consistently called for these records to be provided," Aron noted, "and we applaud Chairman Nadler and Subcommittee Chairman Hank Johnson for their action."

"Republicans did everything in their power to shield Kavanaugh's record from the Congress and the public so the American people would not discover even more damaging information about Kavanaugh than was already out in the public sphere," she added. "The sham process they constructed was disgraceful, and shining light on it now will help ensure it is never normalized."