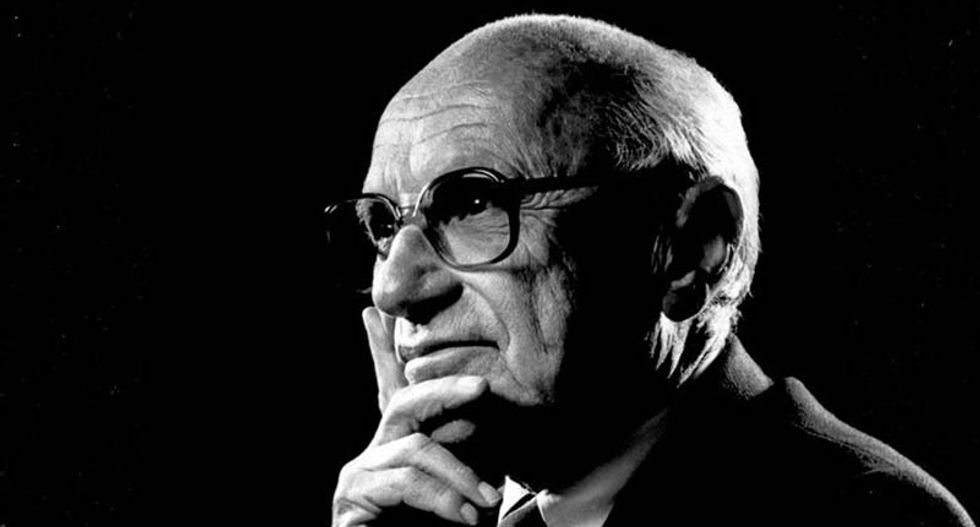 One of the most influential right-wing economists of the 1960s, 1970s and 1980s was Brooklyn native and University of Chicago professor Milton Friedman, who passed away in 2006 at the age of 94. Friedman influenced everything from Reagonomics and trickle-down economics to neoliberalism to libertarianism and the Libertarian Party. Friedman, who served as an economic adviser to President Ronald Reagan as well as U.K. Prime Minister Margaret Thatcher, is remembered for, among other things, what is known as the “shareholder theory,” “shareholder economics” or “shareholder democracy.” But Eric Posner, a law professor at the place where Friedman taught for many years — the University of Chicago — explains in a think piece for The Atlantic why the shareholder theory is seriously flawed and why many Americans, including CEOs, are rethinking it in 2019.

The shareholder theory, as preached by Friedman, was a rejection of what economists called “managerialism” — which, in essence, says that corporations have a responsibility to society, customers and employees as well as shareholders. Friedman, a critic of President Franklin Delano Roosevelt’s New Deal and President Lyndon B. Johnson’s Great Society, totally rejected managerialism and insisted that shareholders should always be the sole focus of corporations.

If Friedman were still alive, he would no doubt be dismayed by the fact that Sen. Bernie Sanders — a self-described “democratic socialist” and unwavering disciple of the New Deal and the Great Society — has raised tens of millions of dollars, often appeared in the #2 spot in polls of the 2020 Democratic presidential primary and become a mentor to much younger politicians like 29-year-old Rep. Alexandria Ocasio-Cortez of New York City. Sanders might ultimately lose the primary to former Vice President Joe Biden — or maybe not — but there’s no question that he has had a major impact in recent years and that many Americans have been rethinking Milton’s shareholder theory.

Posner, in his Atlantic article, notes that even some corporate CEOs, in 2019, are questioning the shareholder theory. On Monday, Posner notes, the Business Roundtable (which represents the CEOs of major corporations) declared that the purpose of a corporation is not to simply maximize profits for shareholders, but to benefit other “stakeholders” as well such as employees and customers. In other words, those CEOs talked like they were rethinking Friedman’s economic views.

“Friedman’s theory was wildly popular because it seemed to absolve corporations of difficult moral choices and to protect them from public criticism as long as they made profits,” Posner explains. “At the same time, it took CEOs down a peg — yes, they were resented even in 1970 — by denying that they were visionaries with public responsibilities. And Wall Street saw dollar signs in the single-minded devotion to corporate profits.”

Arguing that a corporation’s only responsibility is to its shareholders, Posner stresses, is seriously flawed because it ignores the damage that corporations can do if they are allowed to become monopolies or are allowed to behave unethically in order to maximize profits.

“There are other, all-too-familiar ways that Friedmanesque businesses can maximize their profits,” Posner asserts. “They can, like Facebook, break promises to respect their customers’ privacy. They can, like Twitter and Google, generate ad revenue by facilitating the transmission of hate speech. They can, as Exxon used to do, propagandize against climate science…. They can, like the tobacco companies and now the tech companies, push addictive products onto children.”

Liberal proponents of managerialism or a “stakeholder theory” of economics — for example, economist Robert Reich or the New York Times’ Paul Krugman — have repeatedly stressed that society on the whole has a stake in how corporations behave regardless of whether or not someone owns stock in that company, and that governance of the FDR/LBJ variety is needed in order to encourage corporations to behave ethically.

Posner wraps up his piece by stressing that while a return to “stakeholder theory” at corporations is a step in the right direction, it wouldn’t be a panacea.

“Friedman’s strongest point was that business leaders are rarely qualified to determine the best public use for corporate funds,” Posner asserts. “And that is why the switch to a ‘stakeholder’ theory is hardly a guarantee that corporations will now act responsibly. The only proven way to stop corporations from polluting, defrauding and monopolizing is to punish them through the law.”