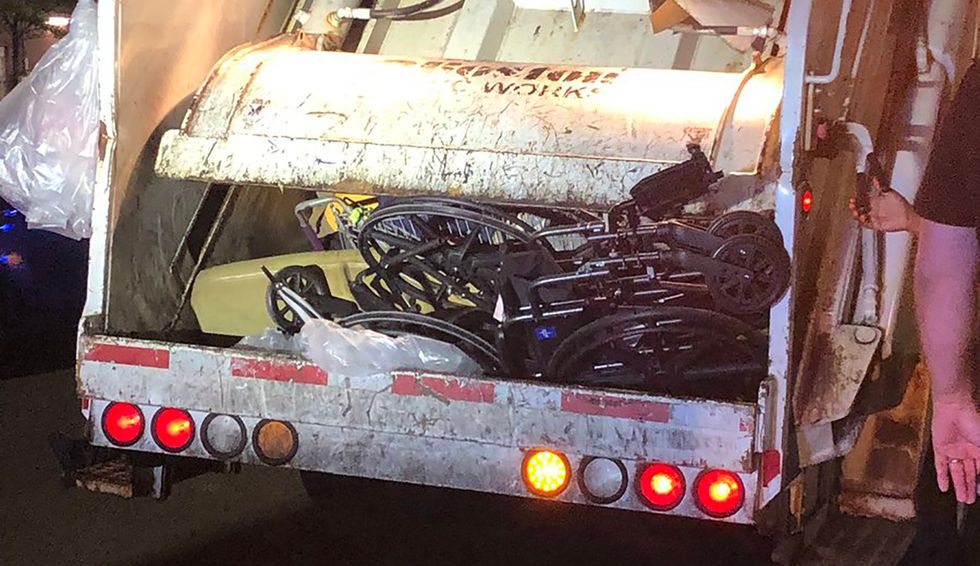 "Operation Clean Sweep" began August 2 after a county corrections officer was allegedly struck during a fight involving a number of people on "Methadone Mile," a stretch of the city near Massachusetts Ave. and Melnea Cass Boulevard where there are a number of clinics and treatment centers. The area has a high homeless population, many of whom have been the target of the operation in the five days and counting it has continued.

The destruction of the wheelchairs is only the latest incident involving the trashing of the possessions of homeless people in the operation.

One of the destroyed wheelchairs was reportedly confiscated from a man named Jarrod who was hit by a car last month.

"It was heartbreaking to speak with Jarrod, who lost not only his wheelchair, but everything he owns that he keeps in his backpack," said homeless advocate Cassie Hurd.

They just crushed three wheelchairs! It was heartbreaking to speak with Jarrod, who lost not only his wheelchair,… https://t.co/ipnJWHZJQE
— Cassie Hurd (@Cassie Hurd) 1565143228.0

Hurd told Boston Magazine that Jarrod's wheelchair was taken after he left it "for a minute" in spite of pleas from his partner to police.

"He is not able to be mobile without it, and not having a home, nowhere to sit, nowhere to go, and was having pain," said Hurd of Jarrod. "He couldn't really balance or walk."

A viral image of the wheelchairs being destroyed made its way across social media Wednesday, generating outrage.

"Mass removing homeless people (e.g. human beings) and calling it 'operation clean sweep' (the obvious implication being said human beings are trash) is genocidal rhetoric and it's disturbing no one in Boston government or media feels the need to point this out," said Johnson.

Journalist Miles Howard questioned whether the images would have any effect on the future of the operation.

"The questions at the heart of #OperationCleanSweep are whether there's dignity in being human (I believe there is) and whether government should honor that intrinsic dignity (I believe it should)," tweeted Howard. "[Boston Mayor Marty Walsh] has chosen to treat the homeless as subhuman trash. What do you think?"

Court Watch Massachusetts appealed to the better nature of Bostonians.

"Can we all agree that it is inhumane and cruel and a waste of resources to crush the wheelchairs of people who are living on the street after a car accident in a full body cast?" the group tweeted.