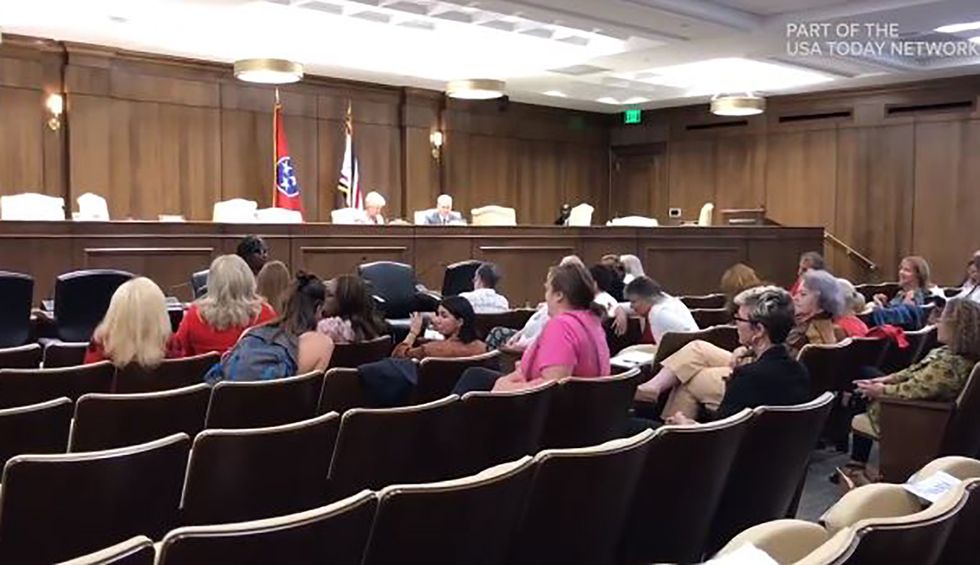 The Republican chair of a Tennessee legislative committee is under fire for cutting off the microphone while a woman of color was speaking — but allowing white men to spew “lunacy.”

“It took all of five minutes for Sen. Mike Bell, chairman of the Tennessee General Assembly’s Judiciary Committee, to prove Cherisse Scott’s point. Scott is founder and CEO of Sister Reach, a Memphis organization that fights for reproductive freedom and health for rural women and girls of color struggling with poverty,” Memphis Commercial Appeal columnist Tonyaa Weathersbee explained.

“Last week, Scott was telling the committee, which is considering a measure that would effectively ban most abortions in the state, that the “colonial and supremacist,” ideologies behind it would result in more death for women who looked like her,” she explained. “It was then that Bell, a Riceville Republican, acted on those supremacist tendencies that Scott alluded to; tendencies which made him tolerate lunacy and lies from other speakers, but not passion and facts from Scott, who was the only African American woman to testify.”

“He shut off her microphone. He summoned the sergeant-at-arms to remove her,” Weathersbee reported. “She turned to the audience and kept talking. Then, he announced a five-minute recess and left the room.”

“I was the only black woman to speak, but they didn’t really want to listen to me talk about my lived experiences,” Scott said. “It also shows the racism and the sexism, because they couldn’t bear to hear a black woman talk about how this could impact us…”

Weathersbee reminded who Bell did not cut off.

“Bell didn’t cut off Hal Rounds, a Fayetteville, Tennessee man who, among other things, claimed to have a “conceptual memory,” of being born,” she noted. “He didn’t cut off Alan Keyes, a perennial presidential candidate with neither a salient point to make nor a Tennessee residency. And he didn’t cut off June Griffin, founder of the Tennessee Committee for The Bill of Rights, when she lamented the lack of prosecutions for moral turpitude, and said the nation never had a problem with morals until after the 1960s.”

The columnist blasted the Republican lawmaker.

“Apparently, Scott’s words, which called out Christian hypocrisy, among other things, were too much for Bell,” she suggested. “Yet if Bell was that dismissive of the only black woman who deigned to address the committee, that speaks to how people like him don’t care about saving fetuses or women as much as they care about keeping them in their place. Whether it’s by curtailing their speaking time or curtailing their rights.”