Exclusive: Democrats should focus on turning out their voters and let Donald Trump do the persuading 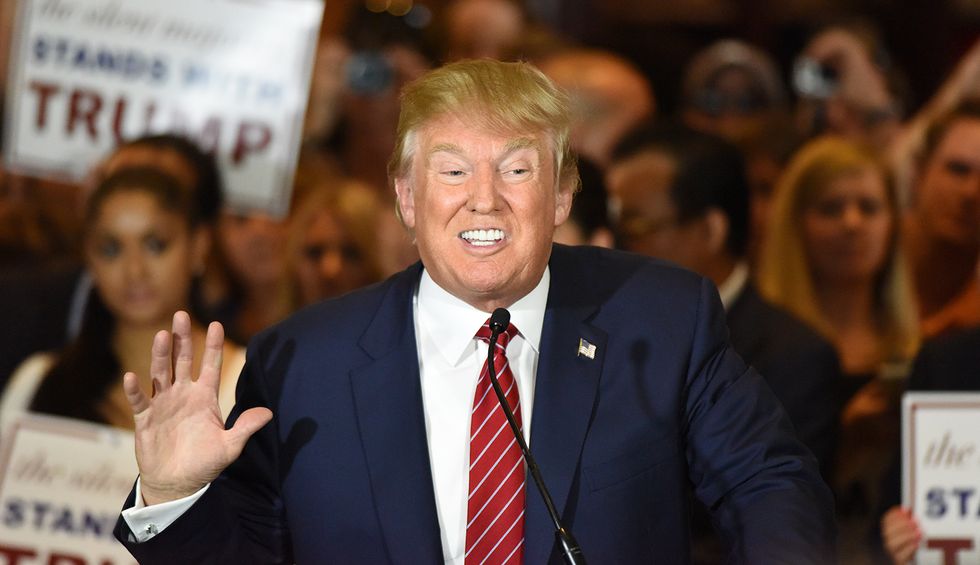 Royalty-free stock photo ID: 312956201 NEW YORK CITY - SEPTEMBER 3 2015: Republican presidentialt Donald Trump announced he had signed a pledge not to run as an independent candidate should he fail to win the party's 2016 nomination.
Joshua Holland
and
Joshua Holland
August 13, 2019

If you're unfamiliar with the long running debate among Democratic organizers over whether it's better to focus their finite resources on turning out non-voters who are inclined to agree with them or try to persuade Republicans disaffected with the party under Trump to defect, it goes like this. Our data is scattered all over the place and voter targeting has become more sophisticated so it's easier and more cost effective than ever to find your people who stayed home. There are a lot of them out there--the non-voting population skews to the left of reliable voters and includes typically Dem-leaning groups like young people and people of color. With rising polarization, there aren't that many persuadables anyway, and identifying them can be tough.

On the other hand, while they're easy to find, non-voters are harder to get to the polls than regular voters who supported  Trump but now have buyer's remorse. Voting is a habit. Changing behavior requires sustained engagement and often doesn't work. And perhaps most importantly, when you persuade someone to switch sides, you add a vote to your column and take a vote away from your opponent's--it has twice the payoff as getting someone who sat out the last election to cast a ballot this time around.

At Morning Consult, Jesse Ferguson, a veteran of Clinton's 2016 run and other Dem campaigns, writes that "the reality is that persuasionists and turnouters are both right — and they’re both wrong. The stakes in this election are too high to bet our chips on any one strategy. This isn’t 'Sophie’s Choice' for the Democratic Party: Rather, it’s an embarrassment of riches, but only if we do it right."

But it's when Ferguson gets to the prescription for firing up the base while persuading nice suburban white people to vote blue that things get muddy. He assumes voters are calculating their preferences according to policy or ideology.

The least-discussed reality of politics is this: Voters are less dissimilar than we think. The turnout targets — the Obama voters who didn’t show up in 2016 — are progressives, but they’re more moderate than many habitual Democratic voters on issues from health care to the environment to fiscal policy. Democrats won’t bring them to the polls just by checking all the right boxes or litmus tests.

On the other hand, persuasion targets are actually more progressive than we might think. For example, many non-college-educated white women (who largely voted for Trump) are concerned about health care, support background checks and believe climate change is real. They’re not the stereotypical MAGA hat-wearing white guys in the diner.

"Instead of endlessly arguing about our focus," he concludes, "we need to move past the porridge that is too hot or too cold, and find one that is just right."

There are two common problems with this analysis. First, getting the policy right to attract this or that group of voters is a sucker's bet because a growing body of research suggests that most people identify with a party and its candidates based on inherited partisan affinity and cues from their own social in-groups, and then work backwards to embrace the policies their party and preferred candidates support.

The bigger problem is that it treats 2020 like a typical presidential race when every indication suggests it won't be. Trump is historically unpopular and deeply polarizing. He's fired up his true believers but also persuaded fence-sitting Republicans that he's unfit for the job. In 2016, Hillary Clinton won 29 percent of non-college whites, down from 36 percent who went for Obama in 2012. But in the midterms, Democrats won 37 percent of that much-discussed group. It won't be the exact same electorate next year, of course, but because turnout in 2018 was sky-high for a midterm--up by 37 percent over 2014--it's probably indicative of what we can expect. And it's backed up by current polling--a recent Quinnipiac poll found that 34 percent of white men without a college degree and 47 percent of white, non-college-educated women "definitely" won't vote for Trump next year.

And of course, college-educated whites shifted toward Democrats in 2016 and continued to do so in 2018. Trump only knows how to fire up his core base and when he does so, he turns off the rest of the country. He is and always has been the Democrats' best persuader.

Turnout next year is likely to set a modern record, but Dems still need to focus on it in the broadest sense of that term. The only demographic that saw a significant decline in turnout in 2016 relative to 2012 was African Americans. Many ascribe this to Obama not being on the ticket, but they voted at a slightly lower rate than they had for John Kerry in 2004, defying a trend of increasing black  turnout that began in 1996.

Not only must Democrats work to get disengaged voters involved, they also have to dedicate their energy to fighting voter suppression, intimidation and disenfranchisement so their voters’ voices can be heard. Trump and his party can read the polls and they know that even with the advantages of incumbency, they have to do everything in their power to keep that from happening.

That fight will go a lot further in deciding the outcome of 2020 than Democratic politicians getting the porridge just right. Dems need to put their resources into getting their people registered and out to the polls, and making sure their ballots are counted, and let Trump's mouth persuade the few swing voters that still exist that he deserves to be a one-termer.