CNN's Jake Tapper tangles with Trump adviser Navarro: 'Economist after economist says you’re not being straight with the American people' 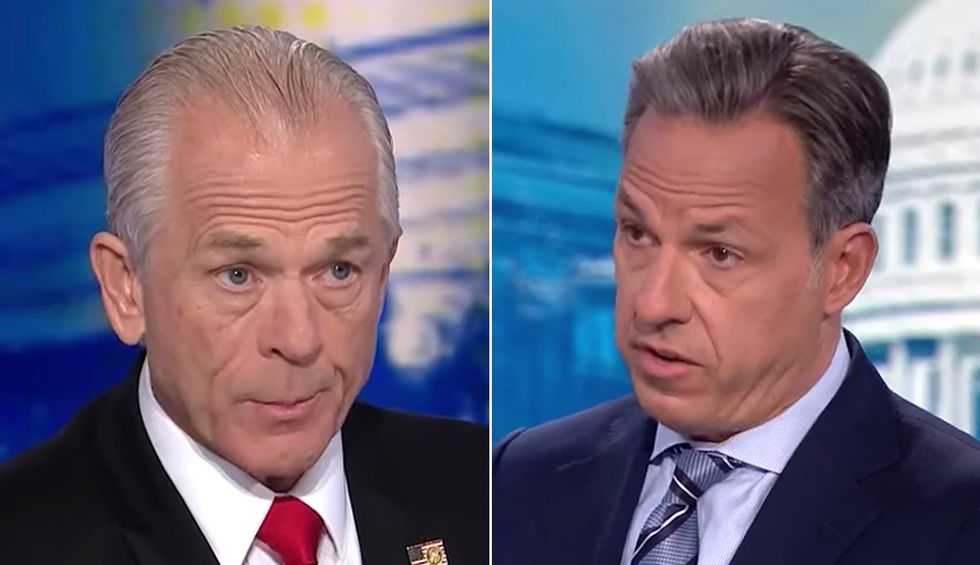 In a highly contentious interview on CNN’s “State of the Union”, host Jake Tapper confronted Donald Trump’s top economic adviser, Peter Navarro, with a seemingly endless list of economists, analysts and business publications who believe he and his economic advice have both been a disaster and that he is not being straight with the public.

After refusing multiple times to concede that President Donald Trump’s trade war — and accompanying tariffs — are having any effect on an economy that many financial prognosticators believe is headed towards a recession, Tapper confronted the White House adviser with the list of his critics — including the Wall Street Journal.

“I want to give you an opportunity to address the fact that you keep saying that China’s bearing all the [tariff] burden,” Tapper began. “That goes against what we’re hearing from researchers at Harvard, the University of Chicago, the International Monetary Fund, the Federal Reserve Bank of Boston, former Trump adviser Gary Cohn — who I know you have clashed with —  and the editorial board of the Wall Street Journal which is conservative.”

“Economist after economist says you’re not being straight with the American people on who is bearing the burden of these tariffs. Why are all these people lying and you’re telling the truth?” the CNN host asked.

“All I would say to you is look at the data. There’s absolutely no evidence, no evidence whatsoever,” Navarro began before being interupted by the host who asked, “Did the study I told you about…” only to be cut off himself.

“There’s no evidence whatsoever that American consumers are bearing any of this,” Navarro exclaimed. “We know China is slashing prices. They’re slashing the value of the yuan. They’re hemorrhaging their manufacturing base. I’d be happy to look at some of those studies, but I can tell you this: this president is committed to standing up to China and getting a good deal for the American people.”