After losing his wife in a mass shooting, he invited El Pasoans to her funeral. Hundreds showed up 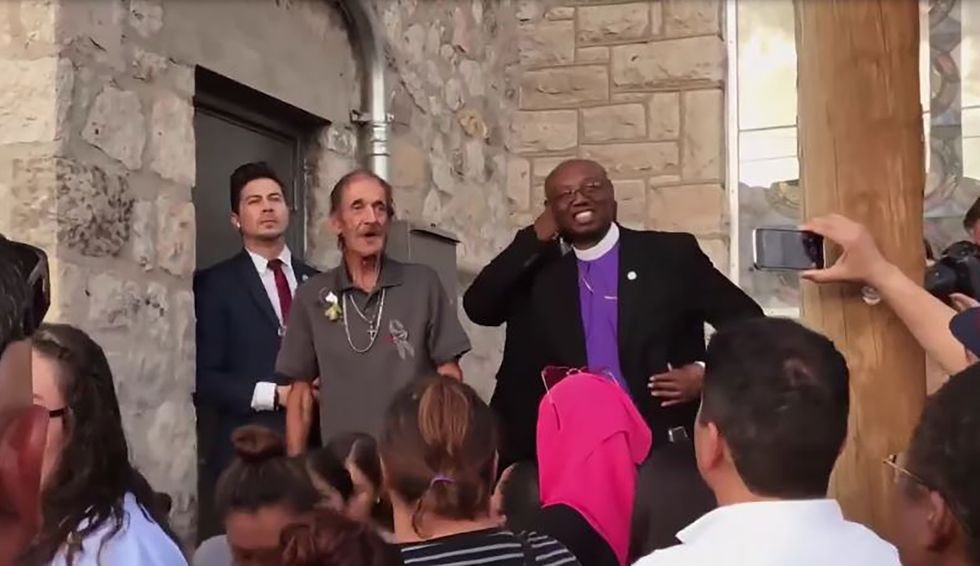 After a gunman took the life of Margie Reckard in a mass shooting at a Walmart store two weeks ago, her husband Antonio Basco didn't have any other family in this town. So he invited all El Pasoans to celebrate "the love of his life" at her funeral Friday.

Their response overwhelmed him.

Hundreds of people began lining up outside La Paz Faith Memorial and Spiritual Center in Central El Paso at about 5 p.m. The line of supporters eventually spanned several blocks and grew to nearly 1,000. A group of motorcyclists that included several veterans stood at attention while holding American flags. Later, neighbors set up a buffet line for supporters who were still in line as the afternoon turned to evening.

Basco thanked the people there for the support. A thin, 61-year old man who walks with the help of a cane, he greeted hundreds of supporters inside the church, where mariachis serenaded parishioners before an hour-long prayer service delivered by Bishop Harrison Johnson. But the El Pasoans who lined up to offer their condolences said they also owed Basco for offering them a chance to come together and try to heal as a community.

“I share the loss and the pain because I love people and I love God,” said Mary Jenkins, a nurse at William Beaumont Army Medical Center, who had been standing in line for two hours for a chance to thank Basco. “I think this is going to bring more unity. It’s a blessing to come together.”

But Basco also showed his grief as he sat near his wife’s coffin and occasionally buried his head in his hands. He’d then regain his composure before rising to adjust the flowers supporters had placed on her coffin.

Dean Eckard, Reckard's son who came to El Paso from Omaha for the services, described her as a gentle soul who "had it tough" growing up.

"But when she met Tony though, she seemed really happy and in love," he said. Eckard added that his mother was battling Parkinson's disease when she died. "For Tony to stick by her through those years ... I can't thank you enough."

Earlier this week Basco told CNN that he takes fresh flowers to a vigil at the Walmart everyday. In a video posted by the news outlet, Basco could be seen speaking to his wife at the site of a white cross that bears her name.

"There's going to be a lot of people. I told you you were important," he said before the funeral. "So what you been up to? What are you going to do up there? I wish you could tell me something."

The attack on Aug. 3 killed 22 people and is being investigated as a hate crime. Authorities believe the gunman posted an online manifesto railing against the “invasion” of Texas by immigrants and Mexicans. Friday's funeral was one of the final services for the victims of the massacre, which included eight Mexican citizens. The attack has thrust the issue of gun control back into the spotlight; Gov. Greg Abbott has announced the creation of a domestic terrorism task force.

State Rep. Joe Moody, an El Paso Democrat, said the display was a physical manifestation of the city still trying to make sense of the tragedy.

“This is a very real way for everyone to openly grieve and go through that process. When you lose someone in your personal life, this is a part of that process you go through,” he said. “I think our community lost something and this is our community grieving together.”

Politics wasn’t a major theme Friday night. But Salvador Perches, owner of Perches Funeral Homes who coordinated the service, announced he ordered 22 hearses to deliver the hundreds of floral arrangements donated for the funeral to the Walmart parking lot to honor the victims.

He also hopes to make a point.

“We’re going to make a statement to the world,” he said. “That something is wrong, and something needs to change.”