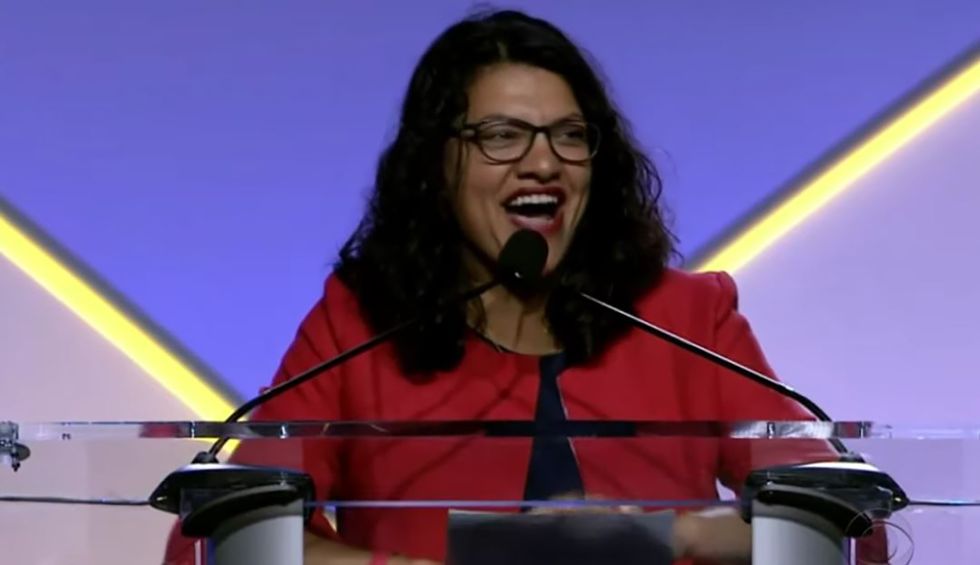 Earlier this week, Axios reported that Israeli authorities had seemingly given the green light to a visit by Rep. Rashida Tlaib of Michigan and Rep. Ilhan Omar of Minnesota. But President Donald Trump urged Israeli authorities to bar the Democratic congresswomen from visiting the country, and the Israeli government won’t be letting them visit after all. This has sparked some angry reactions, with critics asserting that Trump seriously crossed the line by urging Israel to not let two U.S. lawmakers visit.

Ilan Goldenberg of the Center for a New American Security (CNAS) has been a vehement critic of the decision and the role Trump played it in, devoting an entire Twitter thread to the subject.

“Trump’s support for banning Tlaib and Omar opens up a can of worms for members of Congress traveling all over the world,” Goldenberg warned. And according to Goldenberg, Israeli leader Bibi Netanyahu should think twice about the decision because “many governments may now find it much easier to deny far-right-wing members of Bibi’s government entry.”

Rep. Justin Amash (a Michigan conservative and frequent Trump critic) tweeted that Israel’s government “should stand up to President Trump and allow our colleagues to visit.” Amash added that although “nobody has to agree with” Tlaib and Omar’s views, “it will inevitably harm U.S.-Israel relations if members of Congress are banned from the country.”

Condemnation of Israel’s decision has come from both the left and the right. On the left, Sen. Bernie Sanders of Vermont condemned Israel’s decision in no uncertain terms, denouncing it on Twitter as “a sign of enormous disrespect to these elected leaders, to the United States Congress, and to the principles of democracy.” And Sen. Elizabeth Warren denounced it as “a shameful, unprecedented move.”

Rep. Jerry Nadler, chairman of the House Judiciary Committee, was equally forceful in his comments, officially stating, “I strongly condemn this decision by the Israeli government, which undermines the ability for our two allied countries to have the frank, open and, at times, difficult discussions.” And Democratic presidential candidate Julian Castro denounced Israel’s decision as “appalling.”

Israel should stand up to President Trump and allow our colleagues to visit. Nobody has to agree with their opinion… https://t.co/jUXy2rm1zZ
— Justin Amash (@Justin Amash) 1565880179.0

The American Israel Public Affairs Committee (AIPAC) criticized Omar and Tlaib’s views but nonetheless disagreed with barring them from entering Israel, tweeting that “every member of Congress should be able to visit and experience our democratic ally Israel firsthand.” And El Paso-based activist Bobby Sands essentially agreed with AIPAC’s post but wanted them to “speak LOUDER.”

Banning Congresswomen Omar and Tlaib from entering Israel and Palestine is a sign of enormous disrespect to these e… https://t.co/BsA0J5oflV
— Bernie Sanders (@Bernie Sanders) 1565881699.0

Yaakov Katz, editor of the Jerusalem Post, reacted angrily to a Trump tweet urging Israel to not let Tlaib and Omar visit. Katz tweeted that Trump’s tweet “causes Israel immense damage” and went on to say that “for decades, Israel has strived and worked hard to enjoy U.S. bipartisan support. Trump, b/c of politics, wants to stop that.”

Business reporter Christiaan Hetzner, based in Frankfurt, Germany, tweeted, “Trump is radioactive, and everyone who gets in bed with this administration becomes contaminated. No one has been quicker to bask in its cold glow than Netanyahu.”

@yaakovkatz @IsraeliPM Trump is radioactive and everyone who gets in bed with this administration becomes contamina… https://t.co/jEzfP8u6Ba
— Christiaan Hetzner (@Christiaan Hetzner) 1565881140.0