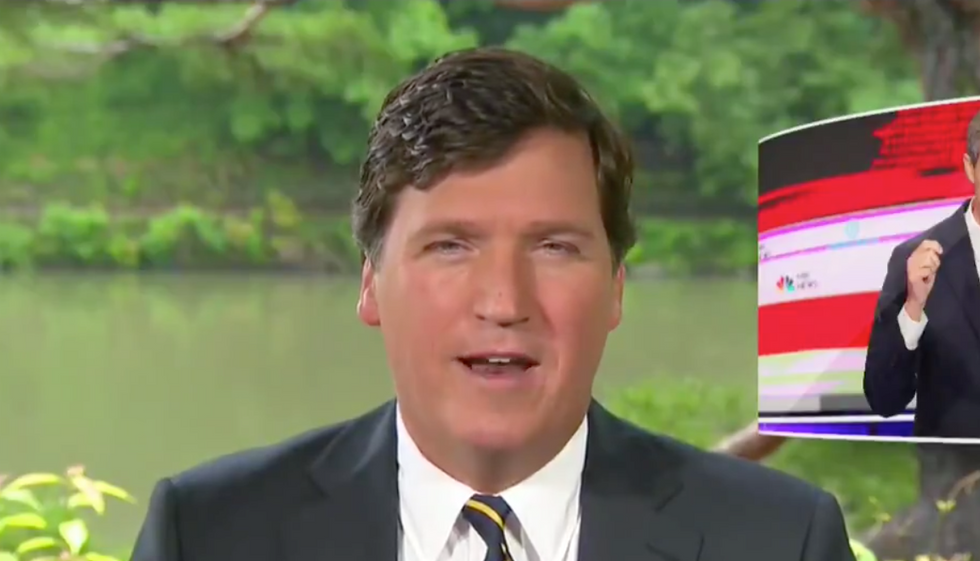 On Saturday, August 3, El Paso became the scene of a terrorist attack that left 22 people dead — and the suspect, according to police, had written a manifesto indicating that he planned to target Latinos specifically because they were “invading” Texas. The attack has focused attention on the terrorist threat posed by white supremacists and white nationalists, but on Tuesday, Fox News’ Tucker Carlson insisted that white supremacy is a “hoax” — and with that comment, Washington Post media columnist Margaret Sullivan asserts, Carlson has “hit a new low.”

To hear Carlson tell it, white supremacy isn’t a real problem in the United States. Carlson, on Tuesday, declared, “This is a hoax, just like the Russia hoax. It’s a conspiracy theory used to divide the country and keep a hold on power.”

In response, Sullivan writes in her August 7 column that former Special Counsel Robert Mueller’s Russia investigation was no laughing matter — explaining that “the Russian attacks on America’s voting integrity, in order to help Donald Trump become president, are anything but a hoax, as the Mueller Report made abundantly clear.”

Most of Sullivan’s column, however, is devoted to Carlson’s ridiculous views on white supremacy and his use of “empirical evidence” (she uses that term sarcastically) to show that it isn’t a problem. Carlson said, “I’ve lived here 50 years, and I’ve never met anybody — not one person — who ascribes to white supremacy. I don’t know a single person who thinks that’s a good idea.”

Sullivan’s snarky response: “Hmm. Maybe his sample size is a bit flawed.” And the Post columnist goes on to state that not only is racism alive and well in the U.S. — it is one of the “core tenets of the opinion-mongers at Fox News,” including Carlson.

“Carlson’s nightly show does a great deal to portray nonwhites as the dangerous ‘other,’ a force to be beaten back to save America,” Sullivan writes. “His denials and rhetoric must be called out for the lies that they are.”

At Fox News, Sullivan notes, the word “invasion” has been used repeatedly to describe “migrants coming to America, generally people of color from countries south of the border.” And the manifesto that, according to police, was posted online the day of the El Paso terrorist attack, states, “This attack is a response to (the) Hispanic invasion of Texas.”

Sullivan not only calls out Carlson in her column, but also, “Fox and Friends” co-host Brian Kilmeade —who, this week, insisted, “If you use the term ‘an invasion,’ that’s not anti-Hispanic. It’s a fact.” Sullivan’s response to Kilmeade: “No, it’s racist propaganda.”

Sullivan concludes her column by explaining where Carlson can find an example of a white supremacist.

“Tucker Carlson has become one of the most high-profile perpetrators of this appalling and divisive message, one constantly amplified by the president,” Sullivan writes. “So, if Carlson thinks he hasn’t met a single white supremacist, he might want to take a searching look in the mirror.”