'You're the motherf*cking best!' Soccer star Megan Rapino urges fans to 'be better' in rabble-rousing speech on live TV 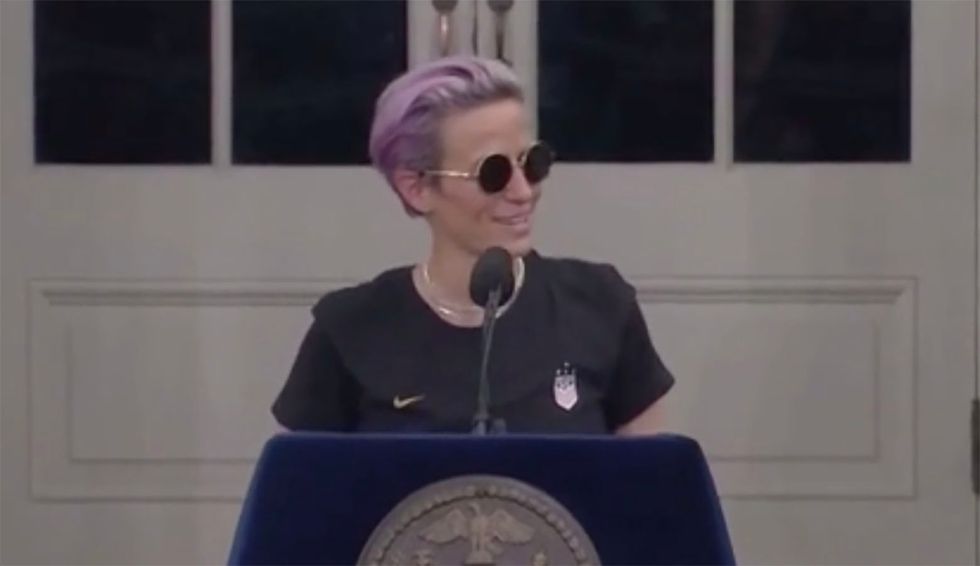 U.S. soccer co-captain Megan Rapinoe on Wednesday delivered a rabble-rousing speech in New York City as the Women's National Team accepted the Keys to the City during a ticker tape parade.

Speaking before a crowd of supporters, Rapino congratulated her “badass” teammates.

“Just shoutout to the teammates. Everybody. Give them a clap. This group is so resilient, is so tough, has such a sense of humor, is just so badass,” she said. “There’s nothing, nothing that can faze this group. We’re chillin’. We’ve got tea-sipping, we’ve got celebrations. We have Pink hair, and purple hair. We have tattoos and dreadlocks. We’ve got white girls and black girls, and everything in between. Straight girls and gay girls.”

“Cuomo is how you pronounce it, right?” Rapino asked. “Thank you so much for hosting us.”

“It’s time to come together,” she added. “This conversation is at the next step. We have to collaborate. It takes everybody. This is my charge to everybody. Do what you can. Do what you have to do. Step outside yourself. Be more. Be better. Be bigger than you’ve ever been before. If this team is any representation of what you can be when you do that, please take this as an example. This group is incredible. We took so much on our shoulders to be here today, to celebrate with you today. And we did it with a smile. So do the same for us. Please. I ask you.”

Wrapping up her speech, Rapino stretched out her arms and yelled, “New York City, you’re the motherf*cking best!”

Watch below, via CNN: