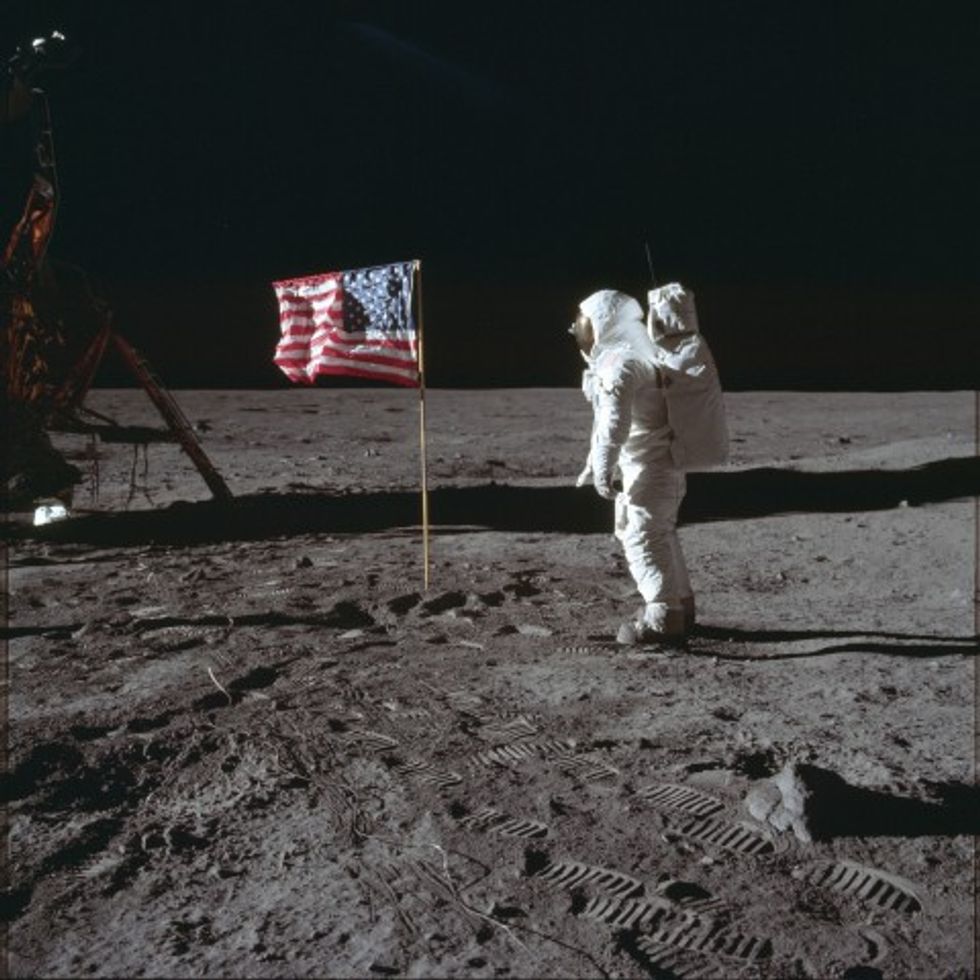 On July 20, 1979, the tenth anniversary of Apollo 11, a Cincinnati reporter asked Neil Armstrong how he felt saluting the American flag from the surface of the moon. “I suppose you're thinking about pride and patriotism,” he replied. “But we didn't have a strong nationalistic feeling at that time. We felt more that it was a venture of all mankind."

This story first appeared at The American Prospect.

So why did they leave behind a flag representing only a fraction of humankind?

In the earliest days of the space race, many seemed to take it for granted that someone's national flag would someday be stuck in lunar soil. "We don't want to find the hammer and sickle flag standing up on one of the peaks of the moon," said Democratic Representative Overton Brooks of Louisiana, chair of the House Science and Astronautics Committee, early in 1961, before the U.S. had even put any human in space. "We want it to be the star-spangled banner."

But in the months leading up to the Apollo 11 landing, a vigorous debate unfolded about alternatives, both inside and outside government. Some proposed unveiling a UN flag, others miniature flags of all nations. But in a heated appropriations debate scarcely a month before liftoff, congressional power brokers made their wishes clear. “You might have some nice international implications by using somebody else’s flag,” said Republican Representative Burt Talcott of California. “But I think you would have some very bad internal reactions and a great reduction in funds for NASA if anything like that happened.”

So on June 10, 1969, NASA notified Congress that it would indeed plant the American flag on the lunar surface. Soon thereafter, Congress passed a law declaring that "the flag of the United States, and no other flag, shall be implanted on the surface of the moon.” After all, said Republican Representative Richard Roudebush of Indiana, “U.S. taxpayers paid for the trip.”

It was arguably not our legislature’s finest hour.

“I’m struck by the frequency of non-Americans talking about when ‘we’ went to the moon—not Americans, but humankind,” said astronaut Kathryn Sullivan. If any moment in history should have represented all the Earth, it was the first footsteps taken by human beings off the Earth. About 650 million people watched live worldwide as the two astronauts climbed down the ladder of the Eagle lander. At most about a quarter of those were Americans. What about the rest?

They certainly weren’t feeling any Cold War triumphalism. Instead, they probably were filled with a sense of wonder at the majesty of the moment. They perhaps appreciated serving as witnesses to an act of unparalleled grandeur. They might have felt like they belonged to something larger than themselves—the community sharing that moment simultaneously around the world. “Seen live, unedited, and everywhere,” said Joshua Rothman in The New Yorker, “it became a genuine experience of global intimacy.”

The planting of the American flag, it turns out, was virtually the only aspect of the entire mission that erected a wall between Americans and everyone else. For example, a plaque left behind on the lunar module read: "Here men from the planet Earth first set foot upon the moon. We came in peace for all mankind.” On the flight back to Earth, Buzz Aldrin said, “This has been far more than … the efforts of a government and industry team, more even than the efforts of one nation. We feel that this stands as a symbol of the insatiable curiosity of all mankind.”

In an article he authored for Life magazine a few weeks later, Aldrin said (somewhat paradoxically) that as he looked upon the American flag on the moon he divined an "almost mystical unification of all people in the world.” In what surely remains the most remarkable telephone call in history, from the Oval Office to Tranquility Base, President Nixon—who made his career as a hardline Cold Warrior—said “for one priceless moment, in the whole history of man, all the people on the earth are truly one.”

And in a noble and unifying gesture that was their last act before climbing back up the ladder, Aldrin and Armstrong left behind a set of five medals and patches. Three, as one might have expected, honored the late American astronauts Gus Grissom, Ed White, and Roger Chaffee, killed in the dreadful Apollo 1 launch pad fire in 1967. But the other two paid homage to Soviet cosmonauts: Vladimir Komarov, who died when his Soyuz 1 capsule crashed after a parachute mishap in 1967, and Yuri Gagarin, who perished in a test flight in 1968, seven years after becoming the first human in space.

Some might say, “But it was the U.S.A. that did it!” Actually, the United States was far from alone. Apollo 11 was the culmination of a worldwide, centuries-long gathering of knowledge. Neil Armstrong said as much on the journey back to Earth: “The responsibility for this flight lies first with history, and with the giants of science who have preceded this effort.” It traces back to the Chinese inventors of gunpowder and rockets. Centuries of conceptual work by physicists, astronomers and mathematicians followed. Copernicus hypothesized that Earth did not stand at the center of the cosmos; Galileo's observations provided strong evidence for that claim. Kepler precisely described the motions of the planets, and dreamed of voyaging to the moon to escape a Europe torn apart by religious wars. Newton, in one fell swoop, discovered both the physics and mathematics from which all celestial mechanics were subsequently derived. And pioneering science fiction visionaries like Verne and Wells vividly imagined future spaceflight—to the moon and far beyond.

It is remarkable how many astronauts have discerned their identity as Earthlings—from a vantage point achingly few human beings have attained. "The first day or so we all pointed to our countries,” said Saudi astronaut Sultan bin Salman Al Saud, who flew on Space Shuttle Discovery in 1985. “The third or fourth day we were pointing to our continents. By the fifth day, we were aware of only one Earth."

These reflections need not be solely retrospective. Eventually the human race will return to the moon, and set foot on Mars, and venture to the stars. The astronauts may be Chinese, Russian, Indian, Israeli or Japanese. The voyages may be financed by nations, or private initiatives like Blue Origin or SpaceX or Virgin Galactic. It may be a World Aeronautics and Space Administration (WASA not NASA).

But let’s not do what President Bush did when he announced his own space initiative in 2004, and reflexively included an illustration of an American astronaut planting an American flag on Mars. Let’s think now, instead, about making more inclusive kinds of symbolic gestures. Let’s proclaim now, instead, that space is the best possible arena to manifest our allegiance to humanity. Let’s decide now, instead, that however we may someday again “slip the surly bonds of Earth,” we will do so on behalf of all the people of Earth. Past, present, and on to the infinite future.

Neil Armstrong, of course, did not only articulate his planetary patriotism in Cincinnati on July 20, 1979. He also expressed the precise same sentiment from the lunar surface on July 20, 1969. It is possibly the most famous sentence in history—and it was by all accounts crafted by Armstrong alone.

Because Neil Armstrong said that while it was but one small step for one man, it was “one giant leap” for humankind. Not for the United States of America. Not for one of the two pugilists in the boxing ring of the Cold War. Not for one small portion of humankind.

When the United States Congress made a political judgment about landing on the moon, they got it badly wrong. But when Neil Armstrong made a choice about the judgment of history, he got it exactly right.

It was one giant leap for humankind.

Tad Daley, born in the United States, is Director of Policy Analysis at Citizens for Global Solutions and author of the book Apocalypse Never: Forging the Path to a Nuclear Weapon-Free World from Rutgers University Press. Jane Shevtsov, born in the Soviet Union, is an ecologist who teaches at UCLA and coauthor of the book Modeling Life: The Mathematics of Biological Systems from Springer.