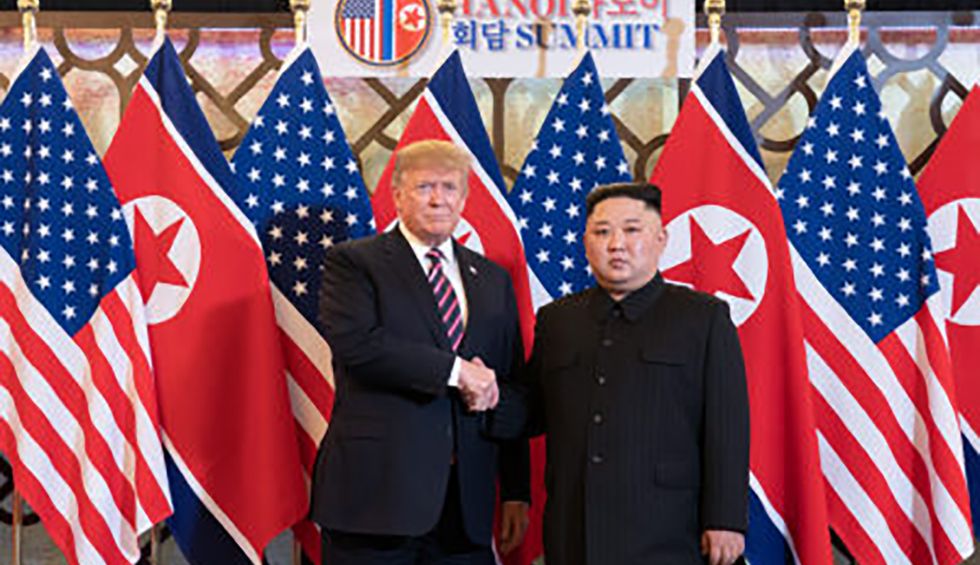 While Donald Trump was becoming the first U.S. president to go into North Korea, the Trump administration may be scaling back its ambitions with the country, from complete denuclearization to a nuclear freeze that accepts North Korea as a nuclear power. It isn’t admitting that publicly, but The New York Times reports that, in the idea beginning to come together, “American negotiators would seek to expand on Mr. Kim’s offer in Hanoi in February to give up the country’s main nuclear-fuel production site, at Yongbyon, in return for the most onerous sanctions against the country being lifted.”

That offer to give up Yongbyon would need to be significantly expanded for a deal to be any kind of win for Trump, since North Korea by now has nuclear capability at many other sites. It would, on the other hand, be a chance for Trump to claim to have accomplished something other than getting a dictator to meet with him.

Trump is trying to claim that as a win, though. Although the meetings between the two countries’ leaders have done Kim Jong Un more favors than they have Trump, Trump is claiming that “President Obama wanted to meet, and Chairman Kim would not meet him. The Obama administration was begging for a meeting. They were begging for meetings constantly, and Chairman Kim would not meet with him.” A series of former Obama officials pushed back immediately and forcefully. Susan Rice, the former national security adviser, called it “horseshit,” with agreement from George W. Bush’s CIA director, Michael Hayden. Former director of national intelligence James Clapper elaborated, saying, “In all the deliberations that I participated in on North Korea during the Obama administration, I can recall no instance whatever where President Obama ever indicated any interest whatsoever in meeting with Chairman Kim.”

Gee, Donald Trump lying. Who would have thought?

Democratic presidential candidates responded to Trump’s North Korea posturing with a combination of questions, criticism, and outright eye-rolling. “I’m not quite sure why this president is so bent on elevating the profile of a dictator,” Julián Castro told CNN. “It’s all symbolism, it’s not substance.” “Despite three years of almost bizarre foreign policy from this president, this country is no safer when it comes to North Korea,” said former Rep. Beto O’Rourke.