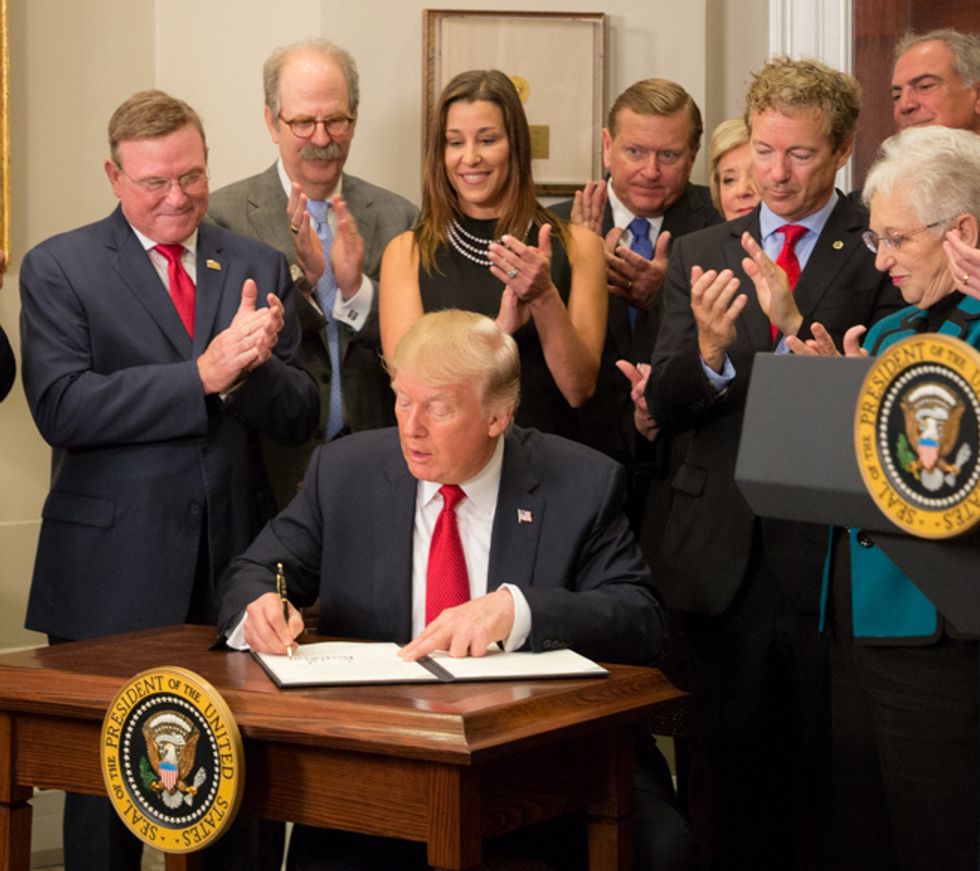 On Tuesday, a three-judge panel on the U.S. Court of Appeals for the 5th Circuit will hear arguments that could decide the fate of the Affordable Care Act and with it the insurance coverage for millions of Americans. So here we go again. Republicans are trying to destroy health care, and the nation pins its hopes on the federal courts Mitch McConnell has so successfully turned into Federalist Society outposts.

Twice now, in seven years, the fate of the ACA has rested in the hands of the Supreme Court, and it very well might again. Despite the fact that this current case is so specious even opponents of the law call it ridiculous, it's made it to a federal circuit court, one step away from the Supreme Court. There's no reason to think this one won't wind up there, too. After all, the most recent challenge to reach this point, King v. Burwell, was roundly panned by constitutional experts as ridiculous and by Chief Justice John Roberts as "unpersuasive," "untenable" and "implausible."

Republicans have to be secretly counting on Roberts to do them a solid again when the case eventually reaches them, because in the last three years they've proven even more incapable of coming up with an alternative to Obamacare than they had been while Obama was still president. After the shellacking House Republicans got in the 2018 midterm election, with health care rising up to be the predominant issue, they surely don't want a repeat. Some of them are even willing to admit that publicly, albeit anonymously. "Rehashing the issue that perhaps most largely cost us the House doesn’t make a lot of sense as a political tactic," one former House Republican leadership aide told The Washington Post's Amy Goldstein.

"Even just bringing back the issue would benefit Democrats significantly, [giving] them all kinds of arguments about the president taking insurance away," the aide added. It certainly would do that, considering it's the president and his Department of Justice urging the courts on to declare the entire law unconstitutional. Even Josh Holmes, former chief of staff to McConnell and now a Republican consultant recognizes the danger. "I don't think health-care politics lends itself to intentional retreat of coverage. I don't think you can get away with that," which is an oblique way of saying Republicans have screwed up for the last decade trying to take people's health insurance away. "Largely, whoever's responsible for the disruption is who people blame."

Republicans, including Holmes, are counting on the pressure that an adverse ruling for the law would put on the Democratic House and their ability to label Democrats as socialists for trying to do something about it. That seems like a less than optimal strategy, given the raft of plans Democrats have offered and the inevitable failure of McConnell's Senate to be able to do anything in response but obstruct. "It's no secret this is a vexing legislative issue for Republicans," another former Republican leadership aide told the Post, who have not much left to do other than "hope they don't have to figure out a replacement plan, because it's proven to be very elusive."

There's just one guarantee here: health care is going to be a top issue for voters, again, and it's going to be bad for Republicans, again. That's going to be true whatever the outcome of this case, because it's going to keep Republican efforts to destroy the law in the news. That's baked in, even if the law survives.