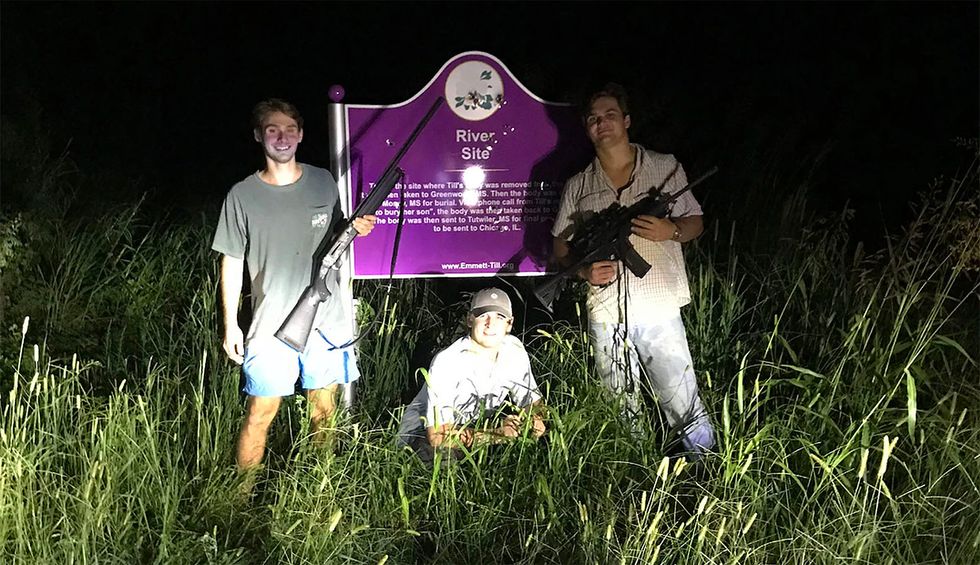 In August 1955, a 14-year-old black boy named Emmett Till was brutally murdered by white men. Many consider Till’s violent murder to be the case that called nation-wide attention to still-active racism; one white woman’s accusation of flirtatious behavior in Mississippi sparked two adult white men to torture, kill, and leave the child’s body in a local river. Decades later, then in her ‘70s, the white woman—Carolyn Donham—reportedly confessed that she made up her claims that Till had made physical and verbal advances on her.

Since 2007, a sign memorializing Till has been in place in the spot where Till’s body was pulled from the Tallahatchie River after his death.

Disturbingly, the sign has been vandalized again and again. Most recently, a story from the Mississippi Center for Investigative Reporting and ProPublica broke, which included a photo of three white University of Mississippi students posing with guns and standing around the sign. The sign was later removed.

The three students have been suspended from Kappa Alpha, their fraternity. The Mississippi Center for Investigative Reporting and ProPublica reported that Ben LeClere was the student holding a shotgun; John Lowe sat below the sign, and an unidentified man (also a member of the frat) held up an AR-15 semi-automatic. The school has not yet named the students in the photo, which is embedded below in a tweet.

The Department of Justice is investigating, as well. To be clear: It’s not yet known if the students in the photo actually damaged the sign or not.

Three students were suspended from their fraternity house, Kappa Alpha, after we shared an Instagram photo one of t… https://t.co/DiVGpr5P15
— ProPublica (@ProPublica) 1564083006.0

This isn’t the first time the memorial has been disturbed. When it was first erected in 2007, it was stolen the next year, with no arrests made. It was replaced, then shot. Then as of 2018, a third version of the sign was installed, and it was again covered in bullet holes. This time it took just over a month.

It will be replaced with a bullet-proof metal marker, weighing between 500 and 600 pounds. It’s expected to be replaced in October of this year, with a ceremony to follow. Matt Dilling, founder of Lite Brite Neon Studio in Brooklyn, New York, is making the sign.

"For 50 years our community didn't want to talk about Emmett Till, they just wanted to forget it," Patrick Weems, the executive director of the Emmett Till Memorial Commission, explained to TIME. Now, the group marks each site that was part of Emmett’s story.

Till would have turned 78 this week. None of this was very long ago at all.