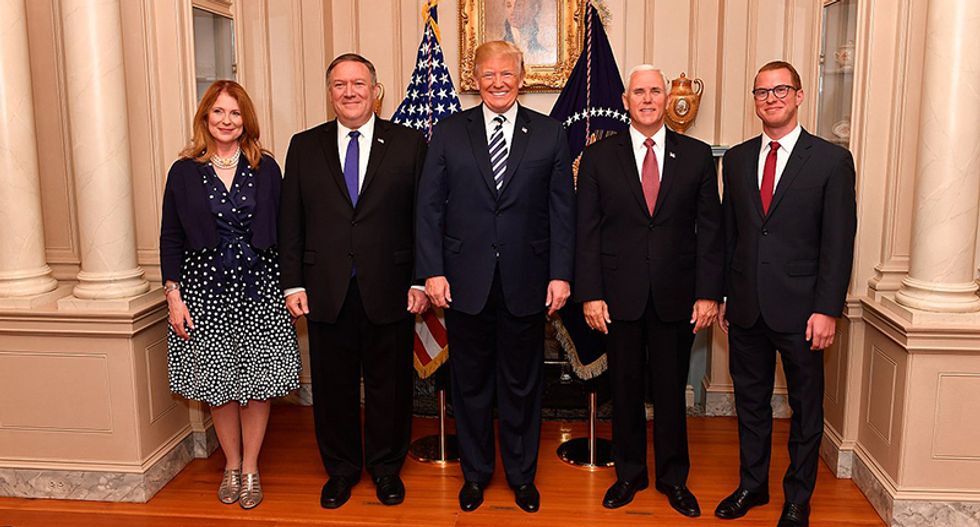 Secretary of State Mike Pompeo’s new “pro-women” human rights commission is filled with members who have been outspoken advocates against a woman’s right to choose while praising governments accused of human rights abuses.

Pompeo announced the creation of the Commission on Unalienable Rights in a Wall Street Journal op-ed last week. Advocacy groups like Amnesty International immediately accused the Trump administration of using the commission as a way to limit the scope of human rights by not using the “global framework that’s already in place.”

The 12-person commission will be chaired by Harvard professor Mary Ann Glendon, a former U.S. ambassador to the Vatican who was once honored as a “hero” of the pro-life movement. Though the State Department claims the group will not deal with abortion, according to The Daily Beast, the commission’s membership has alarmed pro-choice advocates.

“Appointing these ideologues to a commission purporting to safeguard human rights will have the opposite effect and will endanger the health and well-being of countless women,” Michelle Kuppersmith, who heads the advocacy group Equity Forward, said in a statement. “This is a clear extension of the Trump administration’s anti-women, anti-reproductive health campaign, and a blatant attempt to restrict the rights of vulnerable populations around the globe.”

Glendon, who led the Vatican’s delegation to the UN Conference on Women in 1995, told the New York Times at the time that she “could not agree more” with Pope John Paul II in his opposition to abortion and contraception.

‘The whole question about abortion is related to the coarsening of the social fabric,” Glendon told the Times. “It promotes a certain callousness which has frightening implications for the future.”

Other members have also been outspoken in their opposition to abortion.

Jacqueline Rivers, another Harvard lecturer on the panel, spoke at the university’s Law Students for Life Panel, called “Why We Are ProLife: Dignity, Equality, Human Rights,” where she talked about her anti-abortion views. Fellow commission member Paolo Carozza spoke at the University of Notre Dame’s Right to Life Panel about taking a “pro-life approach” to foreign policy, the Daily Beast reported.

Asked whether any members of the panel supported abortion rights, a senior administration official deflected the question, telling the Daily Beast that the commission would “not discuss” issues like abortion.

“The commission is the most pro-women commission in the world, because it doesn't distinguish between men and women,” the official said.

Advocacy groups rejected that notion. The Center for Reproductive Rights called the panel a “part of a comprehensive effort by this Administration to erase sexual and reproductive health and rights from global discourse.”

“Contrary to its asserted purpose, there is no need to redefine or develop foundational principles on human rights,” the group said in a statement. “There is a clear and unequivocal consensus by U.N. human rights treaty bodies and independent experts that reproductive rights are human rights, grounded in the right to life, health, equality, non-discrimination and freedom from cruel, inhumane and degrading treatment, among other rights.”

Human rights advocates are also concerned about statements Glendon and other members have made in praise of governments accused of repeated human rights abuses.

Glendon argued in an article earlier this year for “flexible universalism,” urging human rights activists to respect other countries’ traditional concepts of human rights, PBS News reported. Rep. Tom Malinowski, D-N.J., a former State Department human rights chief, told the outlet that this policy would allow countries like China to further their abuses under the guise of “economic and social rights.”

Yusuf didn’t see it that way, writing that Erdogan’s “desire to increase the executive powers of the president’s office is simply to move toward an American model as opposed to the current European one.”

“The hue and cry about [Khashoggi] has really been — no surprise there — about the upcoming election, another effort to get at President Trump,” Berman said in an October interview with the Hoover Institution, before praising Saudi Arabia for being more moderate than Iran.

A senior administration official told PBS that the commission should be judged “on the work it produces rather than prejudging it based on selective quoting.”

But members’ beliefs matter when it comes to a commission tasked with redefining human rights.

“This effort looks particularly deliberate,” Masha Gessen wrote at The New Yorker. “If the United States asks the international community to redefine human rights as religious rights, it will have the support of a vast coalition of very different countries — a coalition of which Russia has, for a decade, been the informal leader. The subsequent reframing of human rights could change the work of international bodies — and the lives of millions of vulnerable people — for a long time to come.”