Limbaugh: Harris and Obama aren't black — 'this is all about making them victims' 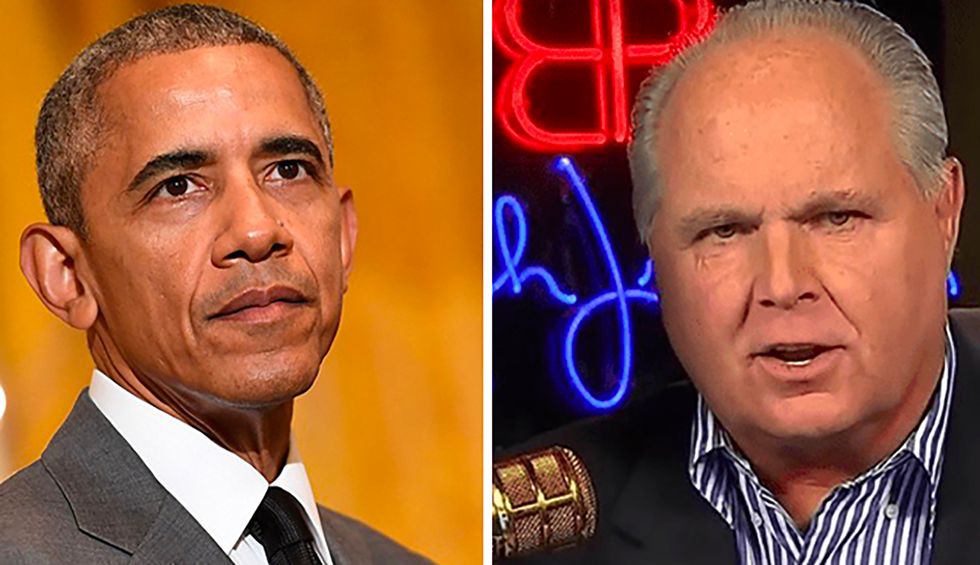 In a clip captured by Media Matters for America, Limbaugh can be heard using a mocking tone to describe Harris and Obama — as well as Rep. Rashida Tlaib, D-Mich. — as people who want to be "victims" so they depict Trump as "this big man bully."

"And by the way, can somebody explain to me how Kamala Harris is an African-American?" Limbaugh asks. "Her father is Jamaican and her mother is Indian. How does that equal African-American? Same thing with Barack Obama. Obama's not African-American, he doesn't have any history here [inaudible] any of that stuff. And Rashida Tlaib is Palestinian, for crying out -- that'd be like calling a Jewish person a person of color. How is Rashida Tlaib a person of color? She's not! This is all about making them victims. It's all about making them appear to be 'Just little people trying to save themselves and save their country and this big man bully, this guy Trump comes along and squashes on them and steps on them and it's all because he doesn't like...' It's absurd!"

This isn't the first time that Limbaugh has claimed that someone isn't really "African American" unless their ancestors of African descent came directly to this country (Harris' father immigrated to the United States from Jamaica to pursue his academic career while Obama's father was a Kenyan citizen who met Obama's mother while attending college at the University of Hawaii). In 2007, Limbaugh referred to Obama as a "Halfrican American" because his mother is white and his father was Kenyan.

"Hey, Barack Obama has picked up another endorsement: Halfrican American actress Halle Berry. 'As a Halfrican American, I am honored to have Ms. Berry's support, as well as the support of other Halfrican Americans,' Obama said," Limbaugh told his audience. He later clarified that he was ridiculing Obama and not reporting on a serious news story: "He didn't say it, but — anyway, there are those out there — greetings."

Harris has also faced accusations regarding her race in the past, most notably when Donald Trump Jr. retweeted (and then deleted) a claim that she isn't African American because she is half-Jamaican and half-Indian. Trump Jr.'s spokesman later claimed, "Don's tweet was simply him asking if it was true that Kamala Harris was half-Indian because it's not something he had ever heard before, and once he saw that folks were misconstruing the intent of his tweet, he quickly deleted it."

Addressing the controversy surrounding Harris, Salon's own D. Watkins wrote, "Black people are not monolithic. Some of us want weed to be legalized and some of us don’t. Many of us marry white people and live happily ever after. Some don’t want or need reparations. Just like Harris and Booker, some black people will never be cool. Expecting her to mark off every item on the Black Candidate Checklist is the reason why these goofy claims like “Is she black enough?” have the space to exist, and they shouldn't."