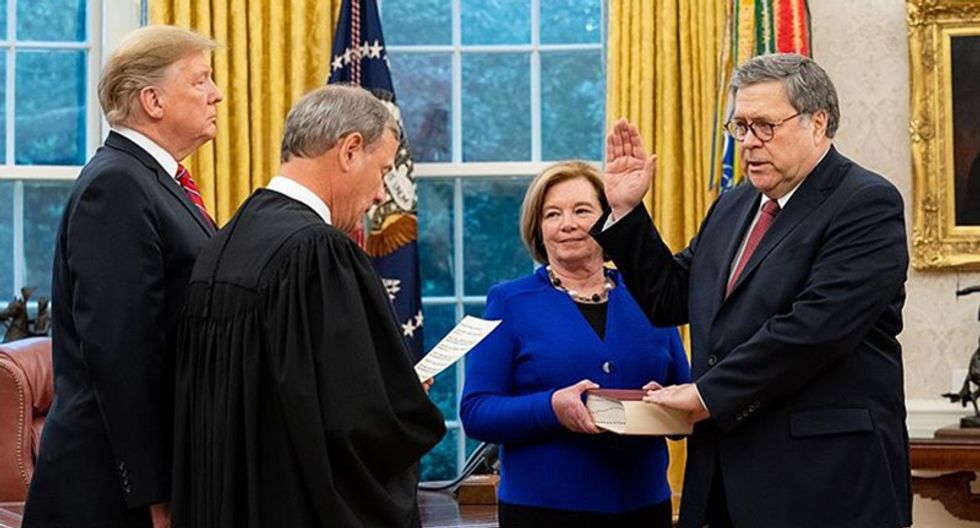 U.S. Attorney General Bill Barr does not plan to recuse himself from the current investigation into multi-millionaire and convicted sex offender Jeffrey Epstein, according to sources who spoke to CNN and Fox News.

A Department of Justice official told CNN on Tuesday that “Bill Barr has consulted with career ethics officials at DOJ and he will not recuse from current Epstein case.”

Barr, however, has recused himself “from any review of the earlier case in Florida,” in which Epstein received a controversial plea deal.

A DOJ official says Bill Barr has consulted with career ethics officials at DOJ and he will not recuse from current… https://t.co/PdGTgVsUHz
— Manu Raju (@Manu Raju)1562684237.0

NEW: DOJ official says that AG Barr will remain recused from any review of the 2008 #Epstein case due to past legal… https://t.co/Q0HzZefsHH
— Brooke Singman (@Brooke Singman)1562684605.0

On Monday, Barr was quoted as saying: “I’m recused from that matter because one of the law firms that represented Epstein long ago was a firm I subsequently joined for a period of time.”

CNN legal analyst Elie Honig said Barr’s decision not to recuse himself from the current case was “trouble.”

“I have zero confidence Barr will let this case play out in its natural course if it should start to implicate or do collateral damage to powerful, politically-connected people,” he tweeted.

This is trouble. I have zero confidence Barr will let this case play out in its natural course if it should start t… https://t.co/JzXzBaOCFU
— Elie Honig (@Elie Honig)1562684621.0

Other legal experts were surprised by Barr’s decision as well.

Huh? The two cases are inextricably bound together. The second is by its very nature a repudiation of the first. https://t.co/bN3o6xe3Sq
— Matthew Miller (@Matthew Miller)1562684682.0

But Walter Shaub Jr., the former the head of the federal Office of Government Ethics, said that it was not necessary for Barr to recuse himself from the current case.

Barr’s former firm, Kirkland & Ellis, is a representative of a party in the earlier case under review. That necessitates recusal. But Epstein’s represented by Marc Fernich & Martin Weinberg in the current case, and they’re not with K&E. So recusal is not required in the new one.

I’m only sharing what the rationale of the DOJ ethics officials would have been. I don’t trust Barr further than I can throw his house and would like to see him recused from anything even remotely in Trump’s personal orbit. But such a recuse would be prudential and not mandatory.