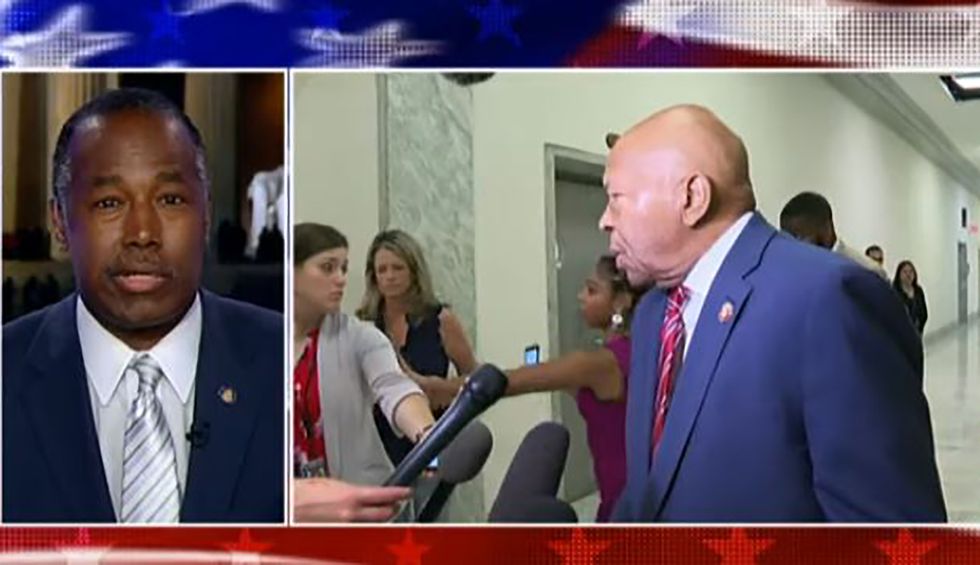 The Secretary of Housing and Urban Development, Dr. Ben Carson, has finally responded to President Donald Trump‘s racist attacks on his hometown of Baltimore, where he formerly served as Director of Pediatric Neurosurgery at Johns Hopkins Hospital in Baltimore. Trump also has been attacking Democratic Rep. Elijah Cummings, whose district covers part of that city. Cummings is neither the mayor of Baltimore nor the governor of Maryland, but Baltimore does sit in the United States, of which Trump is president.

Secretary Carson, the only Black member of Trump’s cabinet, echoed and defended his boss’ racist remarks, saying as a physician he hesitated to send his child patients back to their “infested” neighborhoods.

“As a pediatric neurosurgeon, I spent many hours, sometimes operating all night long, trying to give children of Baltimore and other places around the world a second chance at life. And usually we were successful,” Carson told Fox News host Tucker Carlson Monday, as The Washington Post reports.

Fox News showed Carson in front of a photo of the famous Lincoln Memorial, with the late president brightly lit up.  They then quickly inserted video of an abandoned building in Baltimore, one that could easily exist in nearly any city in America.

“But a few days later, I was in a horrible dilemma, because some of those kids had to go back into homes in East Baltimore that were infested with rats and roaches and ticks and mold and lead and violence,” Carson said. “And I didn’t want to send them back. Sometimes I would even consider, you know, extra tests so they could stay in the hospital an extra day or two.”

“But now, fortunately, God’s given me a chance to do something about it,” he added, as Carlson looked confused.

Carson falsely claimed that because unemployment for Black Americans has declined, and because Trump signed a prison reform bill into law he cannot be considered racist.

“All these things are happening, these are not things a person who is a racist would do,” Dr. Carson insisted.

Carlson insisted that 65% of all children in Baltimore are growing up in single family homes. Carson and Carlson agreed that that must be somehow remedied in order to improve circumstances in Baltimore.

Meanwhile, here’s how Trump uses the word “infested,” as Slate’s Will Saletan notes:

@yashar @VictorBlackwell To folks who are asking whether Trump also calls white areas "infested," here's what a sea… https://t.co/mpvVKHbThr
— Will Saletan (@Will Saletan) 1564244541.0