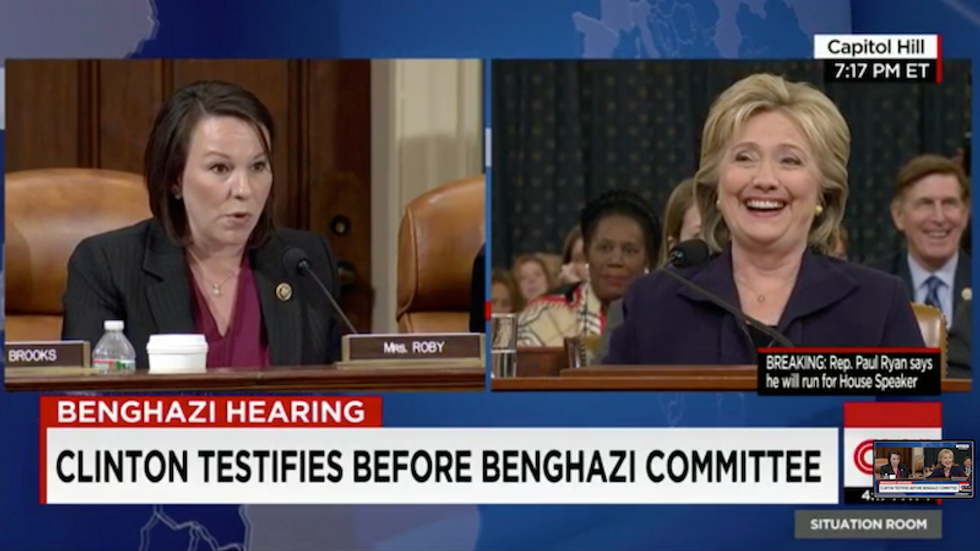 Republicans are fleeing the House and Senate. And this week numbers grew even larger.

Friday afternoon five-term Republican U.S. Rep. Martha Roby of Alabama announced she will retire at the end of her term and not seek re-election next year. She’s the third in the past three days to make that announcement.

This week six-term Republican Rep. Pete Olson of Texas announced his retirement. He too will not seek re-election.

That’s three JUST this week, with over a year left in their terms. In other words, it’s early to toss in the towel.

Rep. Roby was a steadfast defender of accused child molester Roy Moore, refusing to pull her endorsement even after four women stepped forward to CREDIBLY accuse him.

But Roby made her name in her Congressional tenure even earlier.

In 2015, during the historic Hillary Clinton Benghazi marathon hearing, Roby was the Member of Congress who gave Clinton the biggest laugh, while infuriating many with her offensive suggestion:

Clinton laughs when @RepMarthaRoby asks if she was home alone all night during #Benghazi https://t.co/Yz04hlSwH7 https://t.co/FhhzIPAaoj
— CNN Politics (@CNN Politics) 1445556249.0

Based on numbers from Ballotpedia, which has a regularly updated list of exiting lawmakers, for the current Congress there are eight Republicans not seeking re-election (Ballotpedia has not yet added in Rep. Roby, so they list seven.) There are just three on the Democratic side of the House.

Over in the Senate, there are already three GOP Senators who will not seek re-election. There’s just one Democrat.

The National Editor for the Cook Political Report says Rep. Roby will be missed: