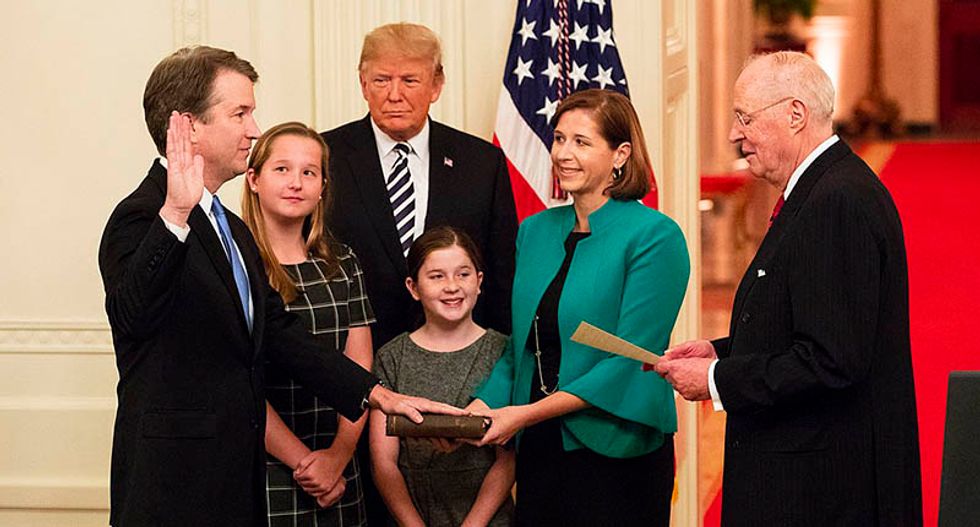 Progressive and women's rights groups on Tuesday marked the one-year anniversary of Justice Brett Kavanaugh's nomination to the Supreme Court by demanding Congress open an investigation into the judge's conduct during his confirmation hearings—as Democrats promised they would last fall.

July 9, 2018 marked the beginning of months-long protests against Kavanaugh, as advocacy groups organized demonstrations against the nominee picked by President Donald Trump.

Now, a coalition of national organizations say, Congress should begin a full probe into whether Kavanaugh committed perjury as well as multiple allegations of sexual assault—and whether the White House interfered in last year's FBI investigation into those accusations.

"Serious questions remain about whether Kavanaugh is ultimately fit to be a Supreme Court justice, and House Democrats now have the power to get answers," said Brian Fallon, executive director of Demand Justice, which led the coalition along with the Center for Popular Democracy, Women's March, and CREDO Action. "House Democrats must obtain the documents that Senate Republicans worked so hard to conceal during last year’s confirmation process. The American public deserves to know the truth about Justice Kavanaugh."

The groups delivered a petition containing 350,000 signatures to members of the House Judiciary Committee, demanding that the panel open an investigation.

When President Donald Trump nominated Kavanaugh a year ago, advocacy groups immediately warned that the judge had attacked abortion rights in at least one ruling in the U.S. Court of Appeals for the D.C. Circuit, had indicated that he did not believe a sitting president could be indicted, and was likely to roll back the Affordable Care Act's protections for people with pre-existing conditions.

When his confirmation hearings began in early September, critics denounced the judge and Sen. Chuck Grassley (R-Iowa), chairman of the Senate Judiciary Committee, when Democrats released evidence that Kavanaugh lied under oath after being confirmed to the U.S. Court of Appeals. The GOP-led committee refused to probe the allegations.

After the first round of hearings concluded and as senators were preparing to vote on Kavanaugh's confirmation, news surfaced that his former high school classmate, Christine Blasey Ford, came forward accusing him of a sexual assault that took place when they were teenagers.

Thousands of women's rights advocates and assault survivors descended on Capitol Hill to demand that Congress investigate the allegations, successfully forcing the Judiciary Committee to hold hearings. But critics were shocked and outraged when Kavanaugh appeared before the committee again only to attack Democratic members, refuse to support a full federal investigation into Ford's claims despite his insistence that he was innocent, and claim Ford's accusations were the result of a campaign to get "revenge on behalf of the Clintons, and millions of dollars in money from outside left-wing opposition groups."

"Last year, more than a thousand women and allies were arrested, and millions more took action in the largest mobilizations against a Supreme Court nominee in history," said Ana Maria Archilla of the Center for Popular Democracy. "In our resistance we exemplified the true spirit of popular democracy—imaginative, informed, and sustained participation by all of us. When we band together and tell our stories, we can change the future of this country. We are continuing that same imperative today—by calling from the investigation Brett Kavanaugh."

"Kavanaugh's hostile stance on reproductive rights and allegations of sexual assault should have been a disqualifying factor for the highest court in the land, but the Senate shirked their responsibility and confirmed a serial sexual abuser to the Supreme Court," added Tabitha St. Bernard-Jacobs of Women's March. "Now, we are back again, urging Democrats to do the right thing to protect our freedom."

After Kavanaugh was narrowly confirmed the the Supreme Court, Rep. Jerrold Nadler (D-N.Y.) assured critics that should the Democrats win control of the House, the party would open an investigation into the allegations of perjury, sexual assault, and the White House's potential interference in the FBI's brief probe into Ford's allegations.

A year after Kavanaugh's nomination commenced a three-month uproar, CREDO Action said, Nadler must follow through on his promise.

"Jerry Nadler must make good on his promise to open an investigation into Kavanaugh," said campaign manager Thaís Marques. "House Democrats have the power to fully investigate Brett Kavanaugh, and it's clear from the over 300,000 signatures on this petition that the public is hungry for a true accounting of the facts."