America under Trump has become a rogue nation 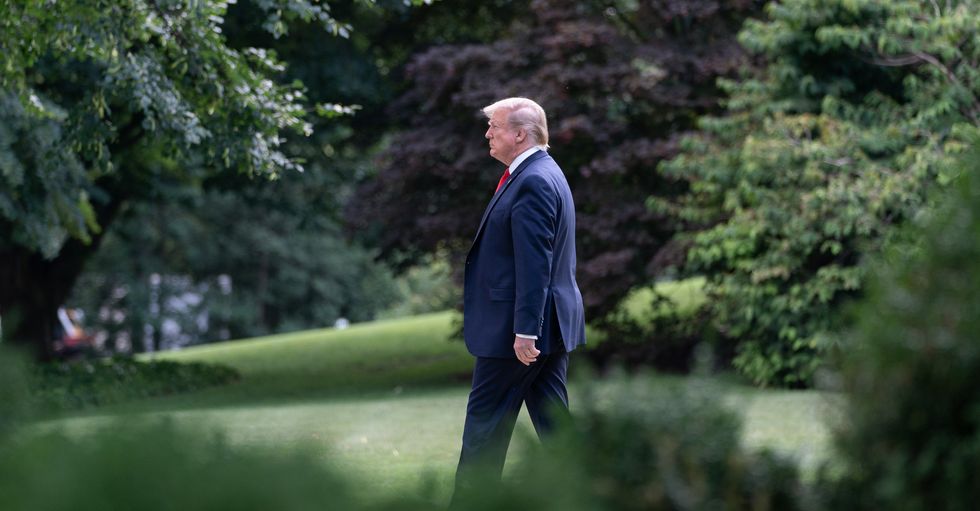 President Donald J. Trump walks from the Oval Office to the speak with members of the press on the South Lawn of the White House Wednesday, July 24, 2019, prior to boarding Marine One to begin his trip to West Virginia. (Official White House Photo by Joyce N. Boghosian)
Common Dreams
July 28, 2019

If America goes to war in Iran, it will be because we are a rogue state, not because they are. Iran’s government is a vicious theocracy which supports bloodthirsty regimes, but the current crisis regarding their nuclear program is one wholly of our government’s making. The Trump administration, in its ongoing quest to upend everything that its predecessor did, was the first to breach the nuclear agreement reached in 2015, and has re-imposed punishing sanctions on Iran, threatening the rest of the international community to do likewise. This despite all evidence showing that Iran was complying with the agreement.

Now we Americans, always the beneficiaries of a “free press”, find ourselves once again swimming in sensational stories of “unexploded mines”, shot-down drones, and impounded oil tankers. The corporate media has in many instances emulated its conduct prior to the Iraq war, being stenographers of the government line.

In his behavior toward Iran, we see just another example of Trump since he came down the escalator, conducting himself as the schoolyard bully. Insults and intimidation are how he ran his campaign, how he operates from the White House, and how he wishes the United States to behave in the world.

Brutality and buffoonery are the calling cards of this administration, at play in all realms of foreign and domestic policy, from the waking nightmare they have purposefully created for asylum seekers on the Southern border, to the attacks they have waged on protections for the LGBT community, to the solicitousness and affection he has shown toward the worst tyrants in the world.

We must not forget, however, that our status as a rogue state did not begin with Trump, nor will it end with him unless the underlying and longstanding assumptions which govern our international conduct are exposed, challenged, and demolished.

Ever since the Treaty of Versailles was conceived from the ashes of World War I with the intent of creating a stable and peaceful international order, America has had a strained relationship with the idea of adhering to international agreements, even (or especially) as they relate to issues of human rights, democracy, and the rule of law, to which we have long and loudly pledged allegiance.

American politicians speak sanctimoniously about preserving American sovereignty, but at the same time want a free hand to operate with impunity in any corner of the world: supporting death squads and dictators, selling weapons as though they were candy, committing war crimes, torture, extraordinary rendition, and overthrowing non-democratic and democratic governments alike. Three notable examples of the latter are Congo in 1960, Chile in 1973, and, notably, Iran in 1953, where the United States conspired to depose Mohammed Mossadegh and install the Shah as dictator. We demand the right to impose our will on others, but refuse to commit ourselves to a set of rules followed by everyone.

Our sovereignty is sacrosanct, but if a nation challenges our wishes, we are within our rights to destroy them. The absurdity of the situation is illustrated perfectly by the state of the Iran nuclear deal. Trump withdrew the United States, re-imposed sanctions on Iran, threatened everyone else to impose sanctions, and largely succeeded in tanking Iran’s economy.

Subsequently, when Iran announced that it too was going to break the agreement, Trump talked of “obliterating” them. In other words, we expect them to respect the parameters of a deal which we are actively trying to sabotage.

Almost 20 years after 9/11, the Middle East lies in turmoil and death. Even though 9/11 was planned and carried out by Saudi nationals, and the Saudi government exports Wahabbist terror across the globe, this medieval regime is one of our closest “allies” in the region. They behead dissidents, stone gays, and cut Washington Post journalists into tiny pieces. With our aid of bombs, intelligence, aircraft refueling, and diplomatic cover, they have been bombing Yemen for four years, creating the largest humanitarian catastrophe in the world today – all the while entreating us to do something about the dangers posed by Iran.

Military operations in Afghanistan, Iraq, Syria, Libya, Yemen, Somalia and Pakistan are not sufficient to sate the gaping maw of American militarism. Now Iran is the villain of the hour, the result of an obsession among a large chunk of the long-discredited but still-empowered Washington foreign policy establishment to turn all of the Middle East with which we do not have financial ties into a smoldering wreck.

We are citizens of a rogue state, and our government’s desire to wage war against Iran is merely the latest example of this. Such a war would be an unmitigated disaster for all involved; it is up to us as citizens to demand that peace prevail and that America act in accordance with our stated values and as a responsible member of the international community.