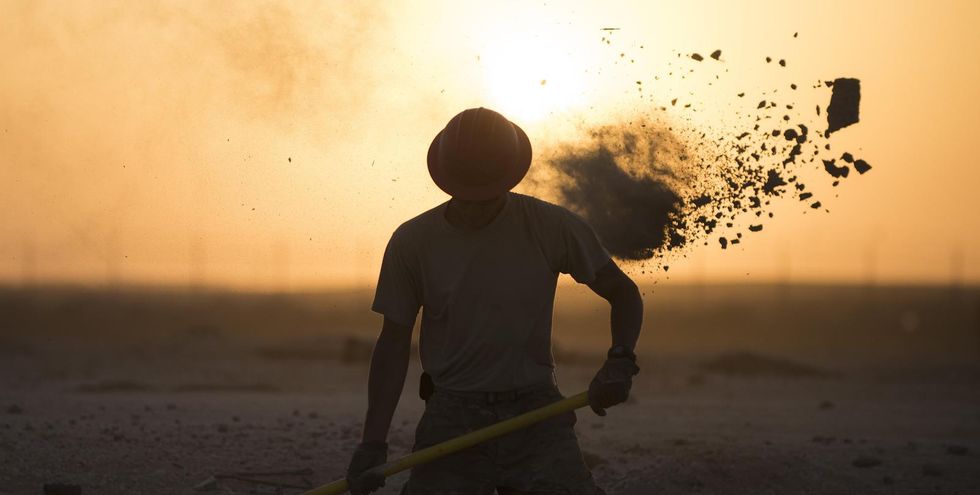 Without urgent international action to address runaway global heating, there will be almost no communities or regions in the contiguous United States unaffected as the number of lethally hot days each year—including those characterized as "off-the-charts" hot—doubles by mid-century and quadruples by the year 2100.

That is among the key findings of a new report and accompanying peer-reviewed study published in Environmental Research Communications, both by the Union of Concerned Scientists (UCS), released Tuesday.

The new report—titled "Killer Heat in the United States: Climate Choices and the Future of Dangerously Hot Days" (pdf)—reveals that "the number of days per year when the heat index—or 'feels like' temperature—exceeds 100 degrees Fahrenheit would more than double from historical levels to an average of 36 across the country by midcentury and increase four-fold to an average of 54 by late century." In addition, the report shows that th average number of days per year in the U.S. with a heat index above 105 degrees Fahrenheit—currently averageing less than six days annually—would more than quadruple to 24 days by the year 2050 and increase eight-fold to 40 by the end of the century.

Kristina Dahl, senior climate scientist at UCS and co-author of the report, said in a statement that the analysis portrays "a hotter future that's hard to imagine" for people living today.

"Nearly everywhere, people will experience more days of dangerous heat even in the next few decades," Dahl explained. "By the end of the century, with no action to reduce global emissions, parts of Florida and Texas would experience the equivalent of at least five months per year on average when the 'feels like' temperature exceeds 100 degrees Fahrenheit, with most of these days even surpassing 105 degrees. On some days, conditions would be so extreme that they exceed the upper limit of the National Weather Service heat-index scale and a heat index would be incalculable. Such conditions could pose unprecedented health risks."

In addition to a dramatic increase of days that 'feel' very hot, the study also looked at the rise of extremely hot days, which the report's other co-author, Erika Spanger-Siegfried, said is unlike anything most people in the U.S. have ever witnessed or lived through.

According to the statement by UCS:

In the U.S., these "off-the-charts" days now occur only in the Sonoran Desert—located on the border of southern California and Arizona—where historically fewer than 2,000 residents have been exposed to the equivalent of a week or more of these conditions per year on average. By midcentury, these "off-the-charts" conditions would extend to other parts of the country, and areas currently home to more than 6 million people would be subjected to them for the equivalent of a week or more per year on average. By late century this would increase to areas where more than 118 million people—over one-third of the U.S. population—live.

"We have little to no experience with 'off-the-charts' heat in the U.S.," Spanger-Siegfried said. "These conditions occur at or above a heat index of 127 degrees, depending on temperature and humidity. Exposure to conditions in that range makes it difficult for human bodies to cool themselves and could be deadly."

The Southeast and Southern Great Plains regions of the country, UCS notes, "would bear the brunt of the extreme heat," but so-called "off-the-charts" days would be experienced by states and regions that rarely or ever see such days currently, including much of the Midwest region.

If urgent action is not taken to reduce emissions, the report found that by 2050:

And looking to end of the century, the report's findings show that a continued failure to address the climate crisis would result in:

The report adds to the enormous body of evidence that only an immediate and rapid response to the global climate crisis can help avoid the worst impacts of an increasingly hotter world.

"If we wish to spare people in the United States and around the world the mortal dangers of extreme and relentless heat, there is little time to do so and little room for half measures," the report states. "We need to employ our most ambitious actions to prevent the rise of extreme heat—to save lives and safeguard the quality of life for today's children, who will live out their days in the future we're currently creating."