This might be the worst argument against impeaching Trump yet. Why is the media so gullible? 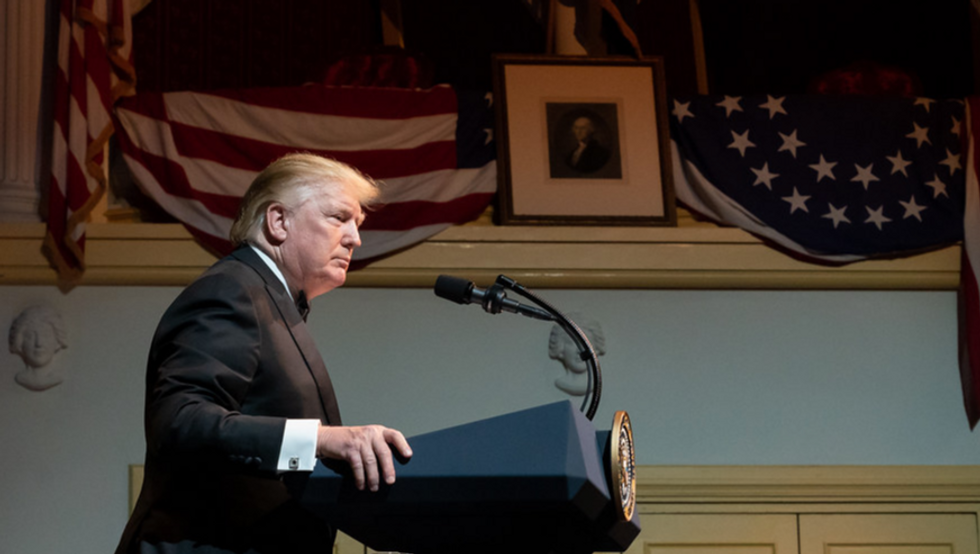 I've written about many of the arguments for and against impeaching President Donald Trump. But the latest in the genre from Washington Post editor Fred Hiatt may be the worst of the bunch.

He doesn't argue, like House Speaker Nancy Pelosi does, that Trump shouldn't be impeached because it is tactically unwise or that it will backfire without GOP support. Instead, despite not being a fan of the president, Hiatt argues that Trump doesn't deserve it.

But he takes something of a circuitous route to getting to this conclusion. His main point boils down to his headline: "We knew who Trump was but elected him anyway. We can’t impeach him for that."

He acknowledges, parenthetically, that it's true that Trump lost the popular vote. "But he won," Hiatt adds. And yet Hiatt doesn't explain why the fact that Trump won without popular support and through a deeply peculiar, anachronistic, and unjust feature of our electoral system — the electoral college — means he has some moral protection against impeachment. Why shouldn't someone who wins through a technicality be impeached — by a Democratic House of Represenatives elected in a landslide — for outrageous conduct, regardless of what the country knew in 2016?

It's true that, as a legal and practical matter, we have good reason to treat the winner of the electoral college as the president, until we can find a way to fix the presidential election process. But that doesn't mean the president should be seen as having a mandate that's accrued by actually reflecting the will of the people in a more robust sense. Arguably, a president who wins by the thinnest of margins in a few states while his opponent garnered a larger portion of the electorate should be more vulnerable to impeachment.

But even talking about whether impeachment is "democratic" is probably a mistake at the start. Impeachment and removal aren't necessarily about following the will of the people; they can be about enforcing the rule of law. Congress could reasonably impeach Trump for committing obstruction of justice, based on the evidence laid out in the Mueller report, to ensure that the laws apply equally to all people even if a majority of the public would vote against such a move. The public doesn't get a vote in criminal trials, and if Congress chooses to act as a law enforcement body, that would be its prerogative. Criticizing this as "undemocratic" would miss the point, just like it would miss the point to claim that the fact that Barack Obama can't run for a third term as president is undemocratic. Democracies need rules that constrain the options that are available.

For example, Hiatt implies that the Mueller report only found that Trump wanted to obstruct justice:

Mueller found no underlying crime that would explain an attempt to obstruct; and Trump in the end did not prevent Mueller from completing his work.

Yes, Trump told his lawyer to fire Mueller; but then-White House counsel Donald McGahn didn’t do it, and Trump didn’t follow through — though he could have. Yes, Mueller makes clear that obstruction is possible as a criminal charge without an underlying crime, and many former prosecutors say they see indictable crimes in the second volume of his report. But Trump, though he refused to testify, allowed the report to be completed and allowed it to be (mostly) shared with Congress. Are we going to impeach a president for wanting to obstruct?

First, attempting to obstruct justice by ordering McGahn to hinder the investigation is still a crime, even if the attempt failed. And it's not true that Trump "didn't follow through" — what happened is that McGahn thwarted him. And Trump tried, again and again, to obstruct the investigation through other avenues — enlisting former Attorney General Jeff Sessions and Corey Lewandowski in the effort and later trying to get McGahn to cover up his first attempt. Hiatt's argument here would excuse a bank robber who failed to break into the vault, despite trying to bribe a security guard, trying to crack the vault's code, and trying and failing to drill through the side of the vault.

More important, though, is that Hiatt misses the obstruction attempts Trump really did complete. Trump really did threaten to go after Michael Cohen's father-in-law, on Twitter and for everyone to see, in an apparent effort to intimidate him and prevent him from testifying for Congress. It appears there were other attempts to get Roger Stone not to cooperate, though these are redacted. And Trump really did dangle a pardon for Paul Manafort, suggesting he could get off if he refused to cooperate with Mueller. It appears this effort was successful in discouraging Manafort to testify honestly, and it may have actually covered up a conspiracy with Russia.

So the idea that the obstruction of justice is really no big deal is wildly inaccurate.

Hiatt suggested another basis for impeachment, but again he dismissed it:

The second article of impeachment might be that Trump encouraged and benefited from foreign interference in the 2016 election. This, too, is unforgivable. But, again, the broad outlines were known before the election — he invited Russia’s help, he crowed about WikiLeaks’ publication of stolen Democratic emails — and, again, he was elected anyway.

Again, this argument fails because it reads a moral mandate out of Trump's election loophole victory. But Hiatt's factual claims are also just wrong. The "broad outlines" of the election interference were not well known. We didn't know Trump's campaign had met with Russians offering dirt on Hillary Clinton. The idea that Russia was intervening at all was widely disputed, and many critics of the narrative suggested falsely that the WikiLeaks emails came from an internal leaker rather than a criminal hack. We also didn't know that Trump was lying about not having any business deals in Russia, and that at the time he was wrapping up the GOP nomination, his personal lawyer was negotiating a potential Trump Tower Moscow deal, which would have needed Kremlin approval.

What's most incredible in Hiatt's piece is that, early on, he acknowledged that Trump is “uniquely unqualified to serve as president,” and "dangerous for the nation and the world.” If he sees some of Trump's flaws so clearly, why does he bend over backward to make bad arguments against impeachment?

It seems Hiatt, like a surprisingly large number of people in the media, have bought into a lot of the president and his allies' arguments about Trump's amazing electoral victory and his supposed vindication from the Mueller report. It's all transparently nonsense, of course. But if you say something with enough confidence and with the power of an entire political party and the White House behind you, some people will believe anything.