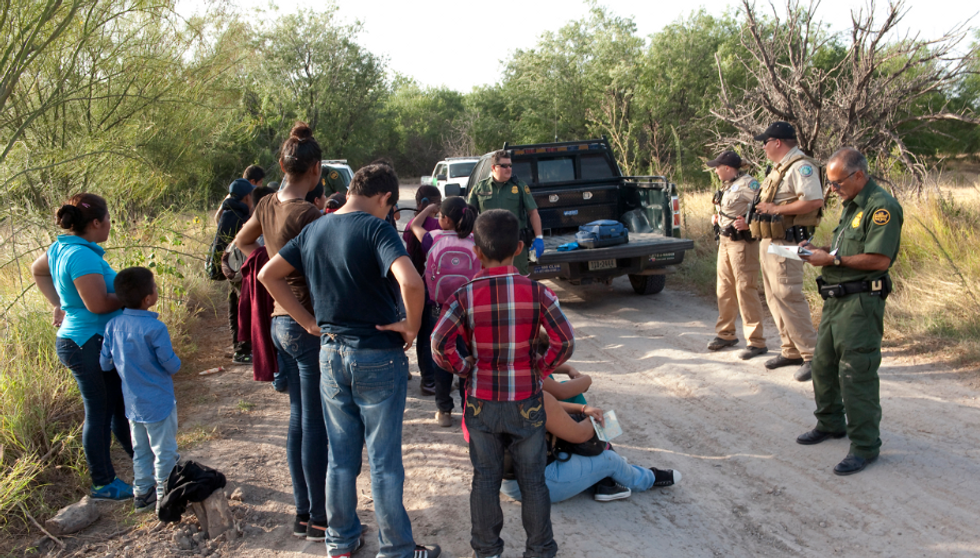 As the White House eyes next week for major raids on migrant families in the U.S., a picture of conditions in Texas Border Patrol stations emerged Thursday in a report from The Associated Pressthat described a dire situation for child prisoners facing inadequate care.

A team of lawyers interviewed 60 children in a facility in Clint, Texas that the group visited and found that the 250 children imprisoned at the station—without their families or any adults—are being held in squalid, dangerous surroundings.

"In my 22 years of doing visits with children in detention I have never heard of this level of inhumanity," said team member Holly Cooper, co-director of the UC Davis Immigration Law Clinic.

Lawyers warn that kids are taking care of kids, and there's inadequate food, water and sanitation for the 250 infants, children and teens at the Border Patrol station.

Data obtained by The Associated Press showed that on Wednesday there were three infants in the station, all with their teen mothers, along with a 1-year-old, two 2-year-olds, and a 3-year-old. There are dozens more under 12. Fifteen have the flu, and 10 more are quarantined.

Warren Binford, a law professor at Williamette University who was part of the team that visited the facility, told AP that children her team interview were so tired they were falling asleep at the tables and chairs in the interview room.

"We've seen the worst conditions that we've seen in the last three years of conducting these visits," said Binford.

"Many of them have not been bathed, many of them talk about how hungry they are," she added.

Binford also said that the conditions at the Ursula Detention Center in McAllen, Texas that her team visited the week before were no better for the children there.

Children that the lawyers spoke to described how they were being forced to care for the young children in the center, including a two-year-old who was not speaking and being cared for by three young girls after an agent asked a group of children, "Who wants to take care of this little boy?"

It was a heartbreaking week for our team. We need to get these children out of border patrol stations and back with… https://t.co/1eeN9W0TtG
— Warren Binford (@Warren Binford)1561090576.0

Another girl, 14, was holding two small girls in her lap.

Clara Long, a researcher with Human Rights Watch, joined the coalition during their visit to Clint and detailed her experience at the facility for her organization's site:

While we were denied access to speak with children quarantined in special cells for those with flu at Clint, several infants held in South Texas facilities were admitted recently to a hospital, after the intervention of doctors and lawyers. Children at Clint told us they don't have regular access to showers or clean clothes, with some saying they hadn't been allowed to bathe over periods of weeks and don't have regular access to soap. The U.S. government argued in court on Tuesday that its obligation to provide "safe and sanitary" conditions does not require it to provide kids with hygiene items such as soap or toothbrushes.

The lasting effects of the mental and emotional trauma to the detained children caused by their mistreatment, San Francisco-based child psychoanalyst Gilbert Kliman told AP, could be long-lasting.

The treatment of the children in Clint is in line with how the federal government behaves toward migrant detainees in its care. In October 2018, journalist Elizabeth King reported on "a pattern of medical neglect in ICE detention centers" that Human Rights Watch described at the time as "serious lapses in healthcare that have led to severe suffering and at times the preventable or premature death of individuals held in immigration detention facilities in the United States."

At least six children have died in federal custody over the past year, and, as Common Dreams reported on Thursday, the administration is going full steam ahead building more concentration camps for holding minors in advance of planned raids made public by the president Monday night.

Binford, in her comments to AP, said that the children at Clint told her they are being packed into rooms.

"The children are telling us that there have been over 300 children in a single room," said Binford. "If that's true, which it appears to be, then, literally, the United States is warehousing children in a 'Lord of the Flies' scenario."

"We've got to do something about it," said Binford.