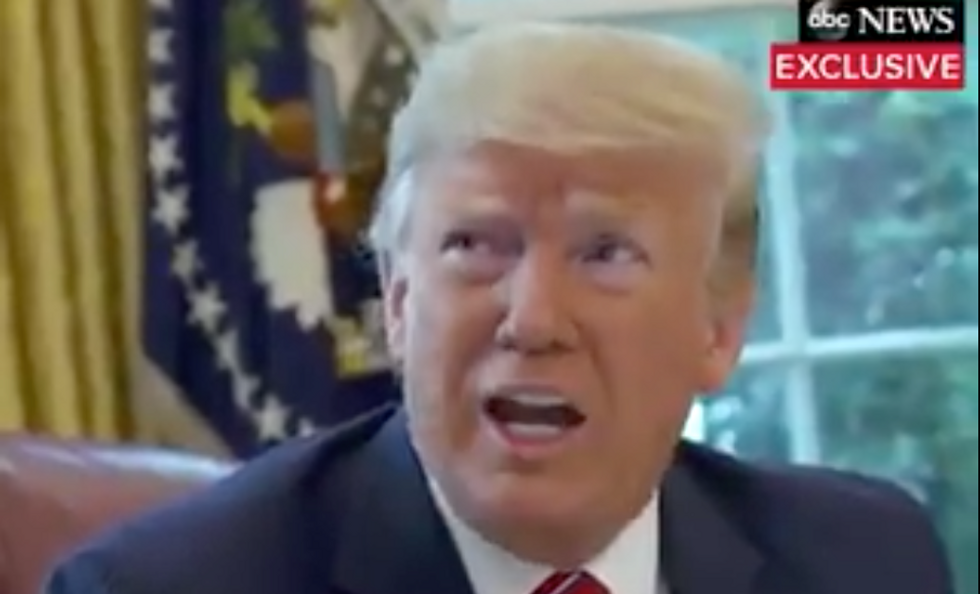 Echoing his famous "Russia, if you're listening" moment from the 2016 election, President Donald Trump said Wednesday in a new interview with ABC News that he would be happy to accept more election help from foreigners — and suggested there might not be any need to call the FBI if it's offered.

"If somebody called from a country — Norway — 'We have information on your opponent.' Oh, I think I'd want to hear it," Trump said.

"You want that kind of interference in our election?" asked interviewer George Stephanopoulos.

"It's not an interference! I think I'd take it," he said. "If I thought there was something wrong, I'd go maybe to the FBI."

The topic came up when Stephanopoulos raised the topic of Donald Trump' Jr.'s testimony to Congress and asked whether the president's son should have gone to the FBI when officials from the Russian government offered him election help in 2016. Trump falsely said in response that Trump Jr. was barely mentioned in the Special Counsel Robert Mueller's report on the 2016 election interference by the Russians; in fact, it appears that the special counsel examined at least two of his actions for possible criminal charges, including the acceptance of help from Russians.

But Trump insisted that his son did nothing wrong and had no reason to go to the FBI when he was the target of Russian interference efforts.

Stephanopoulos pointed out that FBI Director Christopher Wray, who Trump appointed, said that someone in Trump Jr.'s circumstances should go to the FBI, and the president's voice became low and serious.