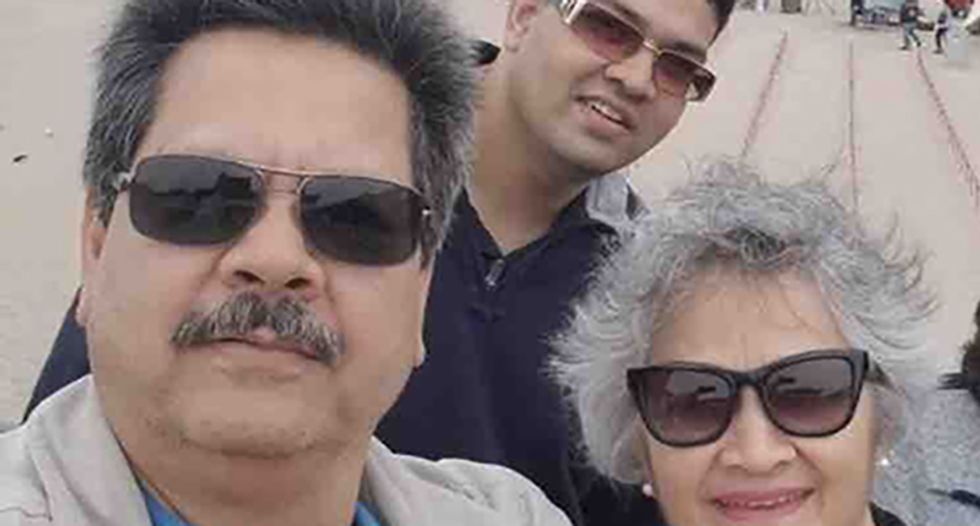 This is a story from multiple news sources including News Maven and LA Times.

A) Here is the police version of events:

The officer opened fire after Kenneth French, 32, of Riverside, "assaulted" him "without provocation" as the officer held his young child, Corona police said Saturday.

Bullets struck French and two of his family members, according to police. The officer was the only person who fired shots in the store, police said.

B)Here is the victim’s cousin’s statement:

C) Here is another police version of events:

From my understanding, from some people we talked to, there was apparently an argument inside. Some type of argument that ensued into a gun battle,” Lt. Jeff Edwards told reporters.

D) Here is a more complete statement from the victim’s cousin, Rick Shureih

I’m not keeping quiet about this! People need to know! This is my family! These are the victims of the Costco shooting the other night. My cousin Kenneth was killed and his parents, my aunt & uncle were also both shot and are in ICU. Do they look intimidating to you? Did he really have to shoot them all? I’m posting this picture because the stories on social media have made them out to be the suspects, and the off duty cop the victim. This is a family that was unarmed and was just grocery shopping. Truth will come out! I’m sure this was a misunderstanding that got escalated for no reason! If anyone was a witness please get in contact with us.

E) Now this unidentified off duty officer has a lawyer with a new version of events noted in the LA times.

”The attorney, David Winslow, said the officer was getting a food sample for his son when he was attacked and briefly knocked out.

“He was shopping with his wife and 1½-year-old at Costco. His son was was in his arms and he was feeding his son some samples when within seconds he was on the ground and woke up from being unconscious and he was fighting for his life,” Winslow said in an interview with The Times.

Now, my input and questions.

I was not there so I do not know what happened, but this seems like a gun-related tragedy that probably would have been avoidable, if there was no gun around. My assumption is that a man, who probably is autistic and being taken care of by his parents, got anxious at a crowded Costco and the off-duty police officer addressed the issue with his gun.

Here are my questions.

1) How do you have an argument with a non-verbal person with a significant intellectual disability (as described by Kenneth French’s cousin)?

2) Why does the story change to indicate that the shooter was knocked unconscious, was this not known at the time of the shooting?

3) Isn’t it pretty amazing that the shooter was knocked unconscious and and then regained consciousness very quickly to fire 6 rounds and kill/critically injure 3 unarmed people?

4) Wouldn’t most people be charged and imprisoned if they shot an unarmed son and his parents at a Costco, is there some legal exception for off-duty police officers?

5) Wouldn’t most shooters that kill other people (even in claimed self defense cases) be identified in the news media? Is there a reason an off duty police officer can remain anonymous?

I was not there. I am guessing that there would not be anyone killed or left in critical condition if a gun was not around. This is a sad American tragedy that keeps repeating itself and these mass shootings appear to be more frequent. I truly hope that sensible gun regulations can help prevent these awful tragedies. I doubt we will see much action concerning sensible federal gun regulations while Trump is president.