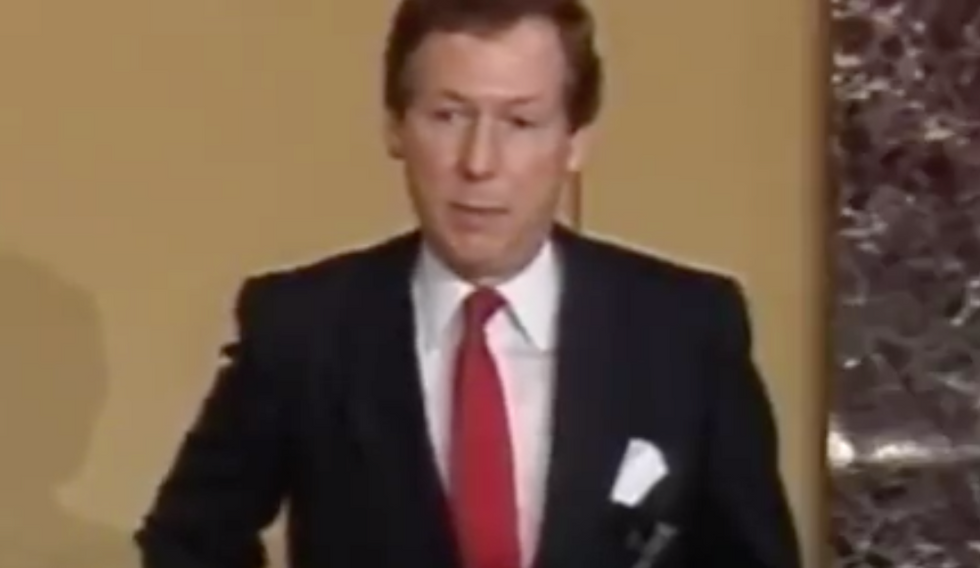 In recent years, Senate Majority Leader Mitch McConnell has wholeheartedly agreed with the U.S. Supreme Court’s Citizens United decision and opposed a broad swath of campaign finance regulations as a violation of the 1st Amendment. Citizens United equated campaign contributions with speech, and McConnell backed that view. But an unearthed video of McConnell speaking in 1987 shows how egregiously he has flip-flopped.

Back in 1987, the Kentucky Republican (who is now 77) had only been in the U.S. Senate a few years: he was first elected to the Senate in 1984, defeating Democrat Walter Huddleston. In the 1987 video, McConnell was not only in favor of campaign finance regulations — he wanted a constitutional amendment setting limits on campaign contributions.

“The constitutional amendment that I will be introducing is rather simple, and it deals with the millionaire problem,” McConnell explains in the video. “It simply would grant to this body and to the various state legislatures the authority to regulate what an individual could put into his own campaign — just like we have the constitutional authority to regulate what any of us can put into somebody else’s campaign.”

McConnell also calls for the U.S. Senate and state legislatures to have “the authority to regulate independent expenditures.” And ironically, the McConnell of 1987 sounds a lot like today’s Citizens United opponents when he stresses that the ultra-rich shouldn’t be able to buy elections.

In the video, McConnell declares, “What distorts the process, of course, is the ability of an individual of unlimited wealth to put literally everything he has into his own campaign…. That clearly is not fair. We can cure that. We can cure it, however, only with a constitutional amendment.”

The video of McConnell speaking 32 years ago was posted on Twitter by Tom Dreisbach, producer/editor of NPR’s “Embedded.” In addition, the Los Angeles resident noted that in 1987, McConnell wrote, “Members on both sides of the aisle have decried the ease with which wealthy candidates can virtually purchase congressional seats.”

Dreisbach’s posts inspired some tweets that were highly critical of the Senate majority leader. @LT_Fart sarcastically tweets, “Holy shit, it’s almost as if he’s a hypocrite,” while @ChrsSchlssr asserts that Americans are “far, FAR past where anything is surprising regarding McConnell being a hypocrite.”

@SuGo2Go denounces McConnell as someone who “is always hypocritical and a cancer on the Constitution. And he doesn’t care.” And @LABirdlady stresses, “There comes a time when a person should retire, when they are dangerous and have nothing positive to offer, only negativity. This is that time for Mitch McConnell.”

Dreisbach isn’t the first journalist who has noted that McConnell was more moderate in the past.

A New Republic report, written by Alex Pareene and published on March 21, delved into how far-right McConnell has been in the 2010s compared to the 1970s or 1980s. In the past, Pareene notes, McConnell was “strategically a Rockefeller Republican at a time when you could still make a bet that such socially moderate business types would survive the successive righteous onslaughts of the conservative movement.”