'It's sociopathic': MSNBC host rails against the warmongers now turning their sights on Iran 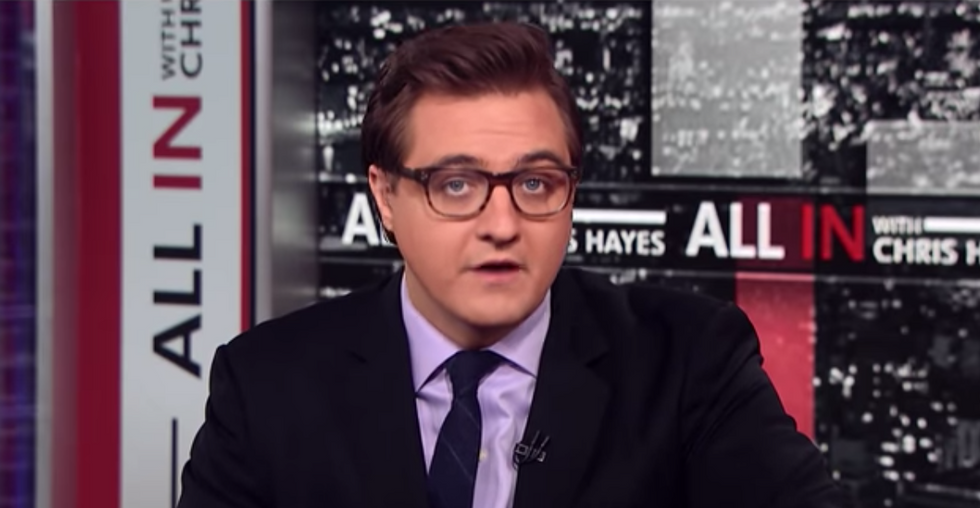 MSNBC's Chris Hayes expressed and disbelief on Thursday as President Donald Trump's administration appears to be creeping closer to a military conflict with Iran — and repeating the well-known mistakes of the past.

"I feel like I'm losing my mind watching all the people who got us into Iraq, which killed hundreds of thousands of people and massively strengthened Iran, now pushing for a war with Iran," said Hayes on Twitter. "It's sociopathic."

He continued: "I mean, by all means, let's have Donald J Trump oversee a US war in the second largest country in the middle east. Obviously that is a great idea."

National Security Adviser John Bolton is clearly the most enthusiastic administration advocate for war, and he seems to have the support of Secretary of State Mike Pompeo.

He concluded: "Nobody wants a war with Iran. But not wanting a war does not mean remaining supine in the face of its outrages. We sank Iran’s navy before. Tehran should be put on notice that we are prepared and able to do it again."

But he barely acknowledged Trump's own role in ramping up tensions with the country by pulling the United States out of the Iran nuclear deal and reinstating sanctions. When he addressed this fact, he recounted the reimposition of sanctions as if it were a force of nature, rather than a reckless choice by an incompetent president:

This might be seen as a response to the resumption of major U.S. sanctions, which have had a punishing effect on Iran’s economy. Except that Tehran did nothing to moderate its behavior after the nuclear deal was signed, and most sanctions were lifted, in 2016.

Of course, in response to the nuclear deal, Tehran complied with the provisions of the agreement, which is precisely all that can legitimately be expected from a deal. But apparently, this doesn't count as "moderating" to Stephens.

Arkansas Republican Sen. Tom Cotton, too, seems intent on launching an attack. Citing the reports from the U.S. government claiming that Iranian-linked forces sabotaged an oil tanker — reports which remain dubious — Cotton said, "These unprovoked attacks on commercial shipping warrant a retaliatory military strike." He expressed little reticence about how an attack could spiral out of control or affect the region.

All of which should make us very nervous about who the administration is listening to and what it may end up doing. Or, perhaps most crucially, what Bolton may convince Trump to do.