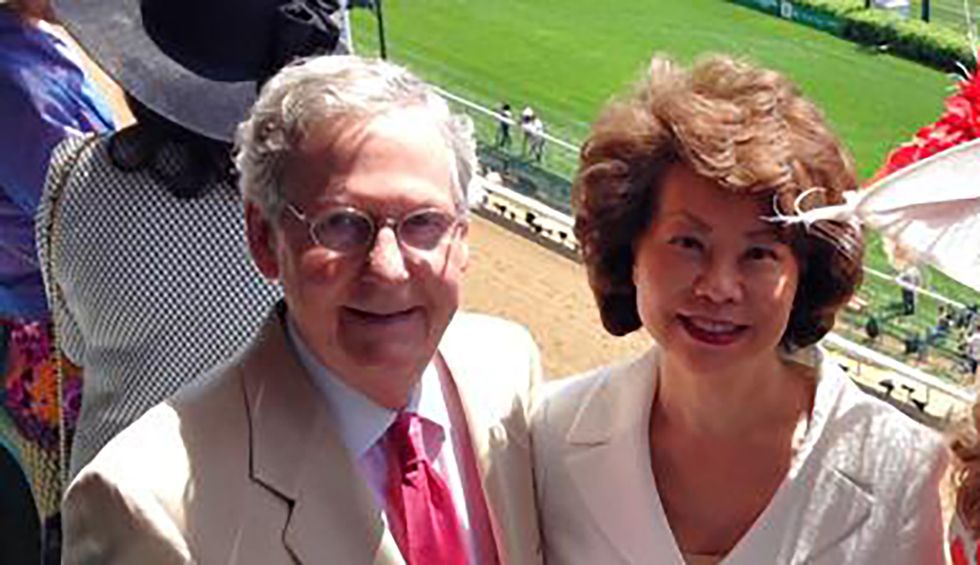 Senate Majority Leader Mitch McConnell’s bond with the Trump Administration is a strong one. Not only has the Kentucky Republican aggressively supported President Trump on everything from U.S. Supreme Court nominees to anti-Obamacare bills, but also, McConnell is married to Elaine Chao, Secretary of the U.S. Transportation Department under Trump. And a Politico report published on Monday describes the ways in which Chao has been pushing McConnell’s favorite transportation projects via a special liaison.

The liaison, according to Politico reporters Tucker Doherty and Tanya Snyder, is Todd Inman, now Chao’s chief of staff. Inman, Politico reports, has been a major ally for McConnell when it comes to grant applications for transportation projects in his state — and the Transportation Department under Chao has paved the way “for grants totaling at least $78 million for favored projects.”

Starting in April 2017, according to Politico, Chao and Inman began meeting to discuss transportation projects in Kentucky. Al Mattingly,  chief executive of Daviess County, Kentucky, told Politico, “Todd probably smoothed the way — I mean, you know, used his influence. Everybody says that projects stand on their own merit, right? So if I’ve got ten projects, and they’re all equal, where do you go to break the tie?”

Doherty and Snyder explain that when Inman was chosen by Chao as a “special intermediary for Kentucky,” it “gave a special advantage to projects favored by her husband, which could in turn benefit his political interests.” John Hudak, a Brookings Institute scholar, was critical of the arrangement when Politico interviewed him.

“Where a cabinet secretary is doing things that are going to help her husband get reelected, that starts to rise to the level of feeling more like corruption to the average American,” Hudak told Politico.

McConnell is up for reelection in 2020, and Democrats would love to unseat him. Doherty and Snyder point out that Senate Minority Leader Chuck Schumer has been urging military veteran Amy McGrath  (a former fighter pilot) to run against McConnell as a Democrat in 2020.

But because Kentucky leans Republican and voted overwhelmingly for Trump in 2016, McConnell’s chances of being reelected are strong. McConnell was first elected to the U.S. Senate in 1984.